A week after winning their first ever Test match in New Zealand, Ireland have won their second one and in the process sealed a famous series 2-1 over New Zealand.

It was an improbable, unprecedented victory. Nobody puts Baby in the corner and nobody dominates the All Blacks – particularly not in New Zealand.

But Ireland did at Wellington for most of Saturday night, out-muscling, out-thinking and out-playing the men in black.

It was a brave performance by Ireland. Wingers passed to wingers. Captain Johnny Sexton eschewed three points and kicked for the line. Their forwards threw themselves into the contest like crash test dummies on a bet and pressured the All Blacks into mistakes.

Ireland, in all facets, were just better. All Blacks captain Sam Cane was “extremely disappointed.”

“We didn’t pull out the performance that we wanted. But we can’t take anything away from Ireland. They’ve been outstanding these last couple of weeks,” he said.

“Massive respect for them. They’ve had a massive tour; three Tests and the Maori. They’ve been class. And deserve the win tonight.”

It was some game of rugby .In the third minute, after strong work by bustling No.8 Caelan Doris, Ireland won a penalty. It was in Sexton Range. Once upon a time Ireland would’ve gone for goal as if by rote. This time the captain kicked for the line. 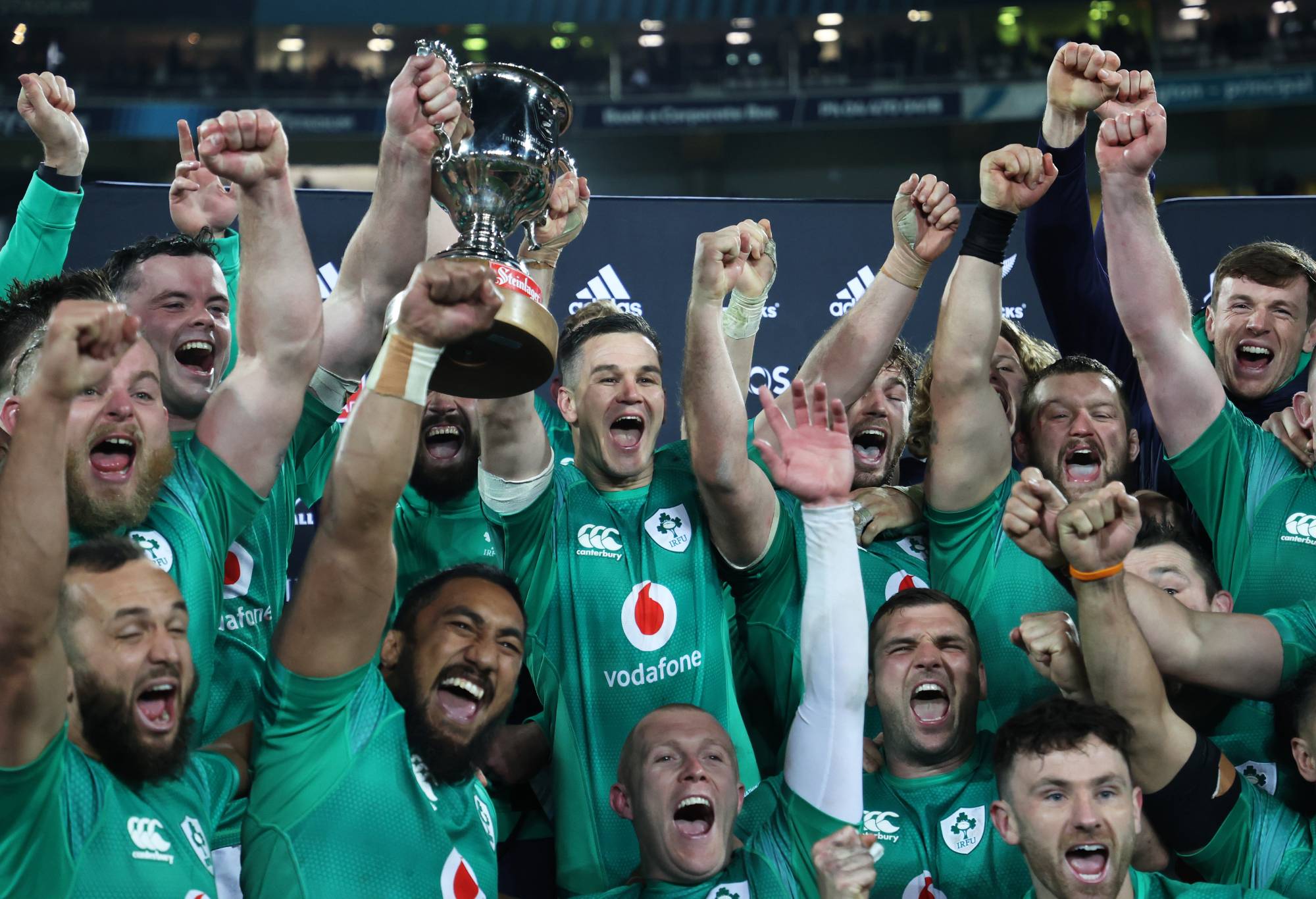 Johnny Sexton, caption of Ireland (C) and the team celebrate during the International Test match between the New Zealand All Blacks and Ireland at Sky Stadium on July 16, 2022 in Wellington, New Zealand. (Photo by Phil Walter/Getty Images)

Who are you people and what have you done with Ireland?

The lineout was pure. The rolling maul a force of nature. The try, to openside flier Josh van der Flier, almost formality.
Soon enough New Zealand won a penalty. And they did go for goal. Jordie Barrett pushed it. If the match was divided into ten-minute rounds, Ireland won the first one on points.

Ireland’s momentum was strong. A kick by Mack Hansen sluiced up the sideline and broke left into touch. They won a scrum from a held-up maul. The players roared like Lleyton Hewitt: Come on!

Their fans rang out “Iiirre-land” on repeat around the Wellington Cake Tin. Word was New Zealand was hosting the largest ever contingent of Irish media. They’d have been hard-pressed not to join in.

The All Blacks kicked off the drama with the traditional “Ka Mate” haka and not their signature “Kapa O Pango”, the one that seems to be wheeled out for especially important Test matches. Perhaps the deciding match of a three-Test series versus Ireland doesn’t cut it.

Yet the haka was no less passionate, Ireland’s steel-eyed response no less compelling. The challenge remains one of the best things in sport.

After 23 minutes the All Blacks were on the board through a Jordie Barrett penalty goal. The Test match had a Lions tour-like intensity. It was World Cup rehearsal. A big, big game of rugby.

Minute 28 and another fine try to Ireland: Backline move 35m out; two mauls; right wing Hansen hit left wing James Lowe with a flat cut-ball before it was passed inside to fullback Hugo Keenan who sluiced into space and iced the movement. Try-time.

Sexton converted from the sideline, the fans cheering his 1002nd point. They were in raptures shortly after when he landed a 45m penalty goal. It was all Ireland.

When outside centre Robbie Henshaw scored and Sexton’s conversion made it 22-3, they were dancing nude in the fields of Athenry.

It was the most points the All Blacks had been behind at half-time ever.

“That was some sort of 40 minutes for Ireland. Almost perfect,” exclaimed Jeff Wilson on Stan Sport. “Plenty of heart, plenty of firepower,” Mils Muliaina agreed.

After half-time the All Blacks, like the Empire, struck back.

After 23 phases on Ireland’s line Ardie Savea reached out an arm and scored. Jordie Barrett made it 22-10.

Waves of green streamed down field. Savea won a penalty; was mobbed. Savea crashed it up the middle. Savea was everywhere, Herculean, the All Blacks’ best.

Then came Akira Ioane. Ireland hadn’t missed a tackle all match. Then four of them missed Ioane.

“The All Blacks are back,” caller Grant Nesbitt declared.

Retallick wouldn’t be, however. And Sexton could still kick goals. His penalty in front put the visitors up by eight points with 24 minutes to go.

When he hit the cross-bar from a penalty that began exactly 50 metres away, Ireland bombed in.

Savea, the man, hit Will Jordan with an inside ball and the flier scorched the earth for 70m to score. What a game of rugby. Gripping, even for the neutral.

Penalty, Ireland! Kickable. But Sexton again went to touch. Brumbies-ball – lineout and driving maul. Another try. Replacement hooker Rob Herring. Perhaps the greatest thing to ever happen in his life.

Savea continued his one-man bombardment of Ireland’s defence. He was immense, a force of nature.
Bundee Aki came off. Roger Tuivasa-Sheck came on. The All Blacks won a penalty metres out. They took a scrum, not points. Ireland won a penalty. And exalted like they’d won Powerball.

Ten to go. Both sides emptied benches. Herring’s lineout throw was not straight.

Five minutes. Penalty All Blacks in front. The All Blacks tapped and went. And Ireland turned it over. Four minutes.
Sexton did his hamstring.

Intercept Ireland! A great thumping kick. Pressure. It was all Ireland. All night. What a night.
Goal line drop out by New Zealand. Multiple phases by Ireland.
Three minutes.
Two minutes.
Ten point game.
It was surely Ireland’s.
And then it was.

“We have four million people at home, up for breakfast, probably having a couple of pints,” Sexton said post-match. “We wanted to make the them proud.

“The effort was incredible. We’re playing the very best in the world. To come down here and do it is very, very special.
“Well enjoy this tonight. And maybe for the next few days, too,” he added with a grin.

The recriminations have started already. Ian Foster will do well to hold his job.

“It looked as if we hadn’t been together for long enough,” said former ABs skipper Kieran Read.

“There’s no excuse for them but it was like just didn’t quite know each other. We weren’t in sync. The timing was out the balls were just behind our runners, knocking on the balls that we wouldn’t normally and I think that just shows that maybe we just haven’t got that combination that we needed, or have had in the past.”

We already know what the post-Jony Ive era looks like