As the fallout continued over the decision to ping Bernard Foley for time wasting with 90 seconds left on the clock in the All Blacks 39-37 win in Melbourne, Owens took to social media to offer support to the official. while Foley had a shot at All Blacks coach Ian Foster.

Welshman Owens is still a go-to source for fans after every major refereeing controversy.

“As so many of you have been in touch to ask … clear communication and warning to the player to get on with it,” Owens said on Twitter.

“A fair and strong refereeing call by Raynal I feel. Learning here is not for the referee, but the players to get on with it when ref asks.”

Owens then took part in a spirited exchange with several users who continued to make the point that while Raynal’s decision might have followed the letter of the law it was not consistent with how he had previously adjudicated the game.

Wallabies coach Dave Rennie and captain James Slipper, and All Blacks’ Sam Whitelock all said afterwards that they had never seen a similar decision played in hundreds of Test matches.

But that argument carried little weight with Owens.

“The player made the error not the referee. How many warnings do you want?,” he said. “The player error put the decision in the hands of the referee. The referee made the correct call. Stop blaming the ref.”

Foley, meanwhile, had a crack at Ian Foster, whose reaction after the game was forthright. 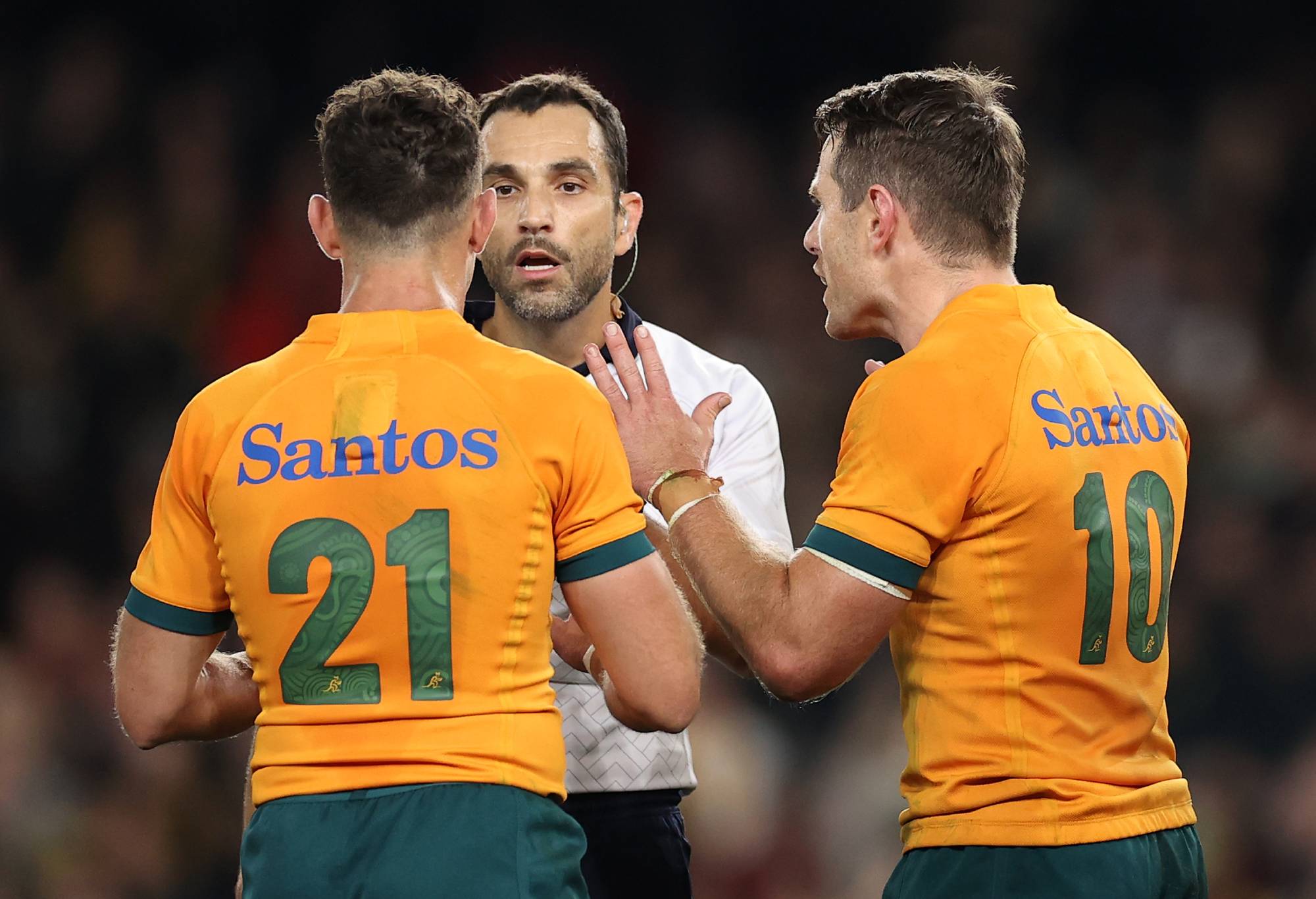 “Part of your game management is listening to the referee. So when the referee says time on you have to play it. I heard very clearly what the ref said.”

Foley, speaking on Stan Sport’s Between Two Posts show, said he was disappointed with Foster’s comments.

“When you get away with one there should be a bit of empathy or sympathy,” Foley said. “That’s the disappointing thing because had the shoe been on the other foot it would have been interesting to see.”

Foley said he didn’t hear the referee tell him he was going penalise and he didn’t hurry up because he believed time was off.

“There’s a process we go through when we’re kicking for touch and we just go through that and my comms to the referee were he said ‘time’s off, can you hurry up and kick?’ There was no (suggestion) there was going to be a repercussion or that time was back on.”

The Roar’s Brett McKay, Harry Jones and Jim Tucker reflect on the big call in our podcast. Stream it here or in your app of choice

South Africa Rugby have strongly rejected allegations of cocaine use within their camp, saying the reports in SA media had caused A “distracting and destabilising” effect on the squad ahead of their win over Argentina in Buenos Aires.

SARU released a statement that called reports “unsubstantiated” and accused South African media of launching a “deliberate attempt to sabotage the team’s preparations”.

It has been reported by SA Rugby Mag that Rapport, a South African paper, was set to publish a story detailing that several Springboks players have tested positive for cocaine.

That came just days after flyhalf Elton Jantjies and team dietician Zeenat Simjee were sent home amid rumours of an affair – which both have now denied.

“SA Rugby is aware that unsubstantiated allegations of failed tests for recreational drugs by Springbok players are circulating among members of the media,” read the statement.

“Disappointingly, these allegations have already appeared online despite the absence of any evidence to support them.

“SA Rugby has consistently advised all inquiring media that no such reports have been received by SA Rugby or any player from the only authority permitted to perform such tests, the South African Institute for Drug Free Sport. SA Rugby does not conduct its own tests.

“Despite the absence of any such reports, players and management in Argentina have been contacted to ‘tell their story’, distracting and destabilising the entire camp in the build-up to today’s Test against Argentina in Buenos Aires.

“SA Rugby wishes to repeat that it has no evidence of any adverse analytical findings for any kind of drug – be it performance enhancing or recreational – by Springbok players and regards the publication or the threat to publish such allegations as a deliberate attempt to sabotage the team’s preparations.”

Earlier Jantjies and Simjee both denied reports that they had a tryst in the lead up to a Test against the All Blacks.

Simjee released a statement that read:

“I am the subject of some extremely negative media reports over the last week, tarnishing me personally and degrading my dignity.

“I chose to maintain a dignified silence while the media storm was raging, as I am severely traumatised by what has transpired.

“Let me unequivocally state that I am shocked at the level of sensational journalism from the newspaper that first published the article. I am devastated by the fact that a journalist and his newspaper could publish such damaging allegations on false and baseless hearsay. It is disappointing.

“As a young professional, I hold my profession in high regard. In the same light, it is an honour and privilege to represent my country and be part of the Springbok Team. As a person of values, I will not bring about disrepute to myself, my family, my profession and all the many incredible people that have been kind, positive and supportive towards me throughout this ordeal.

“The weekend ahead of the Test week in Mbombela, I had been with my parents dealing with family bereavement. So, the allegations of me spending time with Elton Jantjies at a guesthouse is devoid of any truth.

“This has cast an extremely negative aspersion and disgraceful perspective on my character to which other media houses have also added their perspective. I appeal to the original publisher to retract and apologise for the negative sentiment cast on me.

Injured Wallabies ace Samu Kerevi is adamant he will be fit and firing for next year’s World Cup despite his ACL injury suffered at the Commonwealth Games.

Kerevi was on hand in Melbourne this week to watch the Wallabies’ agonising loss to the All Blacks.

He said his Japanese club team had reacted well to the injury that will keep him out for up to nine months. He is in his final year with Sungoliath. 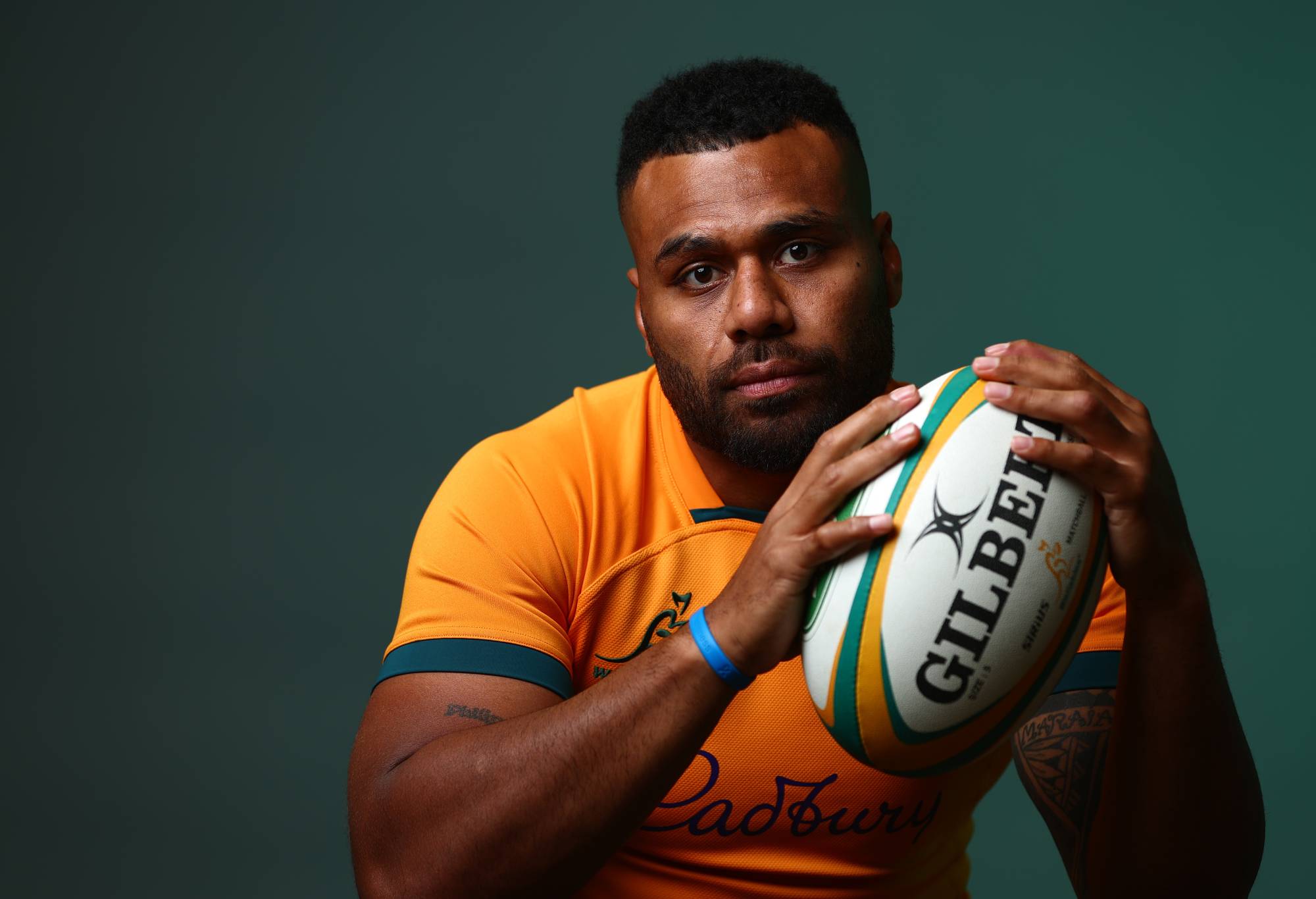 “I was not sure how they were going to react at the time, but after speaking to them, they have been really supportive,” said Kerevi. “They understand it’s part of footy. No one wants to get injured, and it’s part of the game. They’ve been supportive, and I’ll be heading back in December to finish my rehab there.”

Kerevi revealed he sought advice from Wallabies great Tim Horan, and had the same doctor – Peter Myers – as Horan used for a serious knee injury in 1994.

“The same doctor that operated on him, operated on me,” Kerevi said. “Hopefully I get some good luck from that. Shout out to Peter Myers, he’s a great surgeon and has been telling me a lot of great stories about boys that have come back from an ACL. I have a lot of confidence I’ll come back fine.”

All Blacks great Andrew Mehrtens believes the stand off between Australia and New Zealand will be resolved but it won’t be an easy process.

The Stan Sport commentator told stuff.co.nz that he was “confident there is a solution there.

“It feels a little like, not quite toxic, but a marriage with some tension, with blame flying, and maybe each side not listening to the other’s perspective,” he said.

“Both partners know they need the other, nobody wants the divorce, but within that both parties want to do what’s best for themselves … It’s almost like we need a really good independent mediator who says, ‘guys, this is what’s fair’.

“It’s what it feels like. There is acceptance that we have mutual interests, and there needs to be compromise on both sides. At the moment it’s like both sides to a marriage going into the first counselling session and pointing the finger at each other.”

Mehrtens said the two unions were using media to get their narrative out.

“Both sides, and maybe more Australia at times, are using media to put certain narratives out there, and sometimes it sounds a lot more combative than what it is behind closed doors,” he said.

“We’ve seen how strong public opinion in New Zealand can be with the debate around the [All Blacks] coaching the last few months, and there is a bit of media manipulation going on there.”

On Thursday, RA chair Hamish McLennan reiterated his union was not bluffing and a split from NZ for Super Rugby remained an option as the Australian seek a greater share of income the competition generates.

“I think the new regime understands and appreciates that New Zealand’s future is tied to Australia’s success,” said McLennan.

“Whether you call that respect, I don’t know, but I think there’s an acknowledgement that we’re actually a pretty important part of their mix now.”

Breaking away was a real option, he added: “we wouldn’t have said it if we weren’t real.

“There’s no doubt, we’ve said it publicly, that the high performance outcomes would probably be better with New Zealand in the mix.

“But we’re not going to play second fiddle, so time will tell if we’re bluffing.

“They know we’re serious – we’ve got the backing of our member unions, Super Rugby club chairs and Channel 9 to go domestic.

“And look, we haven’t won a Bledisloe in 20 years so who’s to say that a domestic competition wouldn’t deliver more money to Rugby Australia and possibly, with more teams and more players, better high performance outcomes? We’ll see.”

Despite the heartbreak, there is plenty of cause for optimism at Collingwood