Upsets! Injuries! Suspensions! Non-suspensions! A celebration of all that is great about women in league! There’s much to get into, so here come your talking points.

The tragic tale of Nelson Asofa-Solomona

In Round 3, it was a swinging arm to the head of a Parramatta opponent. In Round 18, another high shot that sent Canberra’s Jordan Rapana from the field for a head injury assessment.

The very next week, he did enough to get charged with two offences against South Sydney but Friday night just gone was surely the piece de résistance, as he slammed New Zealand Warriors hooker Wade Egan’s head into the turf wth his elbow, breaking several of Egan’s teeth.

But no matter how hard he tries, under the NRL’s judiciary system poor Nelson just cannot get himself suspended. This must just be incredibly embarrassing for a so-called ‘hard man’.

For multiple transgressions this year Asofa-Solomona has been fined a total of just $8800 and his contact on Egan wasn’t even sent to the judiciary.

Luckily this Friday against the Gold Coast he gets yet another chance to hit a player in the head or cause injury to an opponent – surely, surely, he can achieve his suspension dream.

We believe in you, Nelson! You can do it!

Are blowouts sneaking back?

Seven of this weekend’s eight games were decided by double figures, with the only close result Cronulla’s golden point win over South Sydney, a great game.

Sure, we had upsets like Wests Tigers teeing up Brisbane and Parramatta blowing out Penrith early, but games didn’t feel close at all with the average win margin just over 14 points.

Last week we had a similar situation (7/8 won by over 10, average win just under 14 points) and there’s a chance for more beatings looking at the coming week’s fixtures too.

Could be that I’m overanalysing, because on the whole games have been fun to watch. But it’d be nice to have more than one or two games in the balance each week with 10-15 to go.

It doesn’t matter Penrith don’t have their halves available

Nathan Cleary is out five weeks suspended and Jarome Luai is injured for around a month to six weeks if reports are accurate. So, do Penrith really have a disaster on their hands?

Short answer, no. The second half of Friday night’s game should’ve sent a clear message to the comp that without both halves and even down to 12 on the field, Penrith are a formidable unit.

After being scattered by Parramatta for three tries in 18 minutes after Cleary’s send-off, the Panthers regathered themselves and actually won the second half 6-4. If the Eels thought they’d have another picnic, they were taught otherwise.

Coach Ivan Cleary is naming his son’s replacement tomorrow and it’s likely the halves will be Sean O’Sullivan and Jaemon Salmon, who’ve had plenty of first grade this year and will know what to do. If the responsibility falls to others there’s still a pretty effective structure rolling out every week.

Remember, too, the Panthers went without Cleary for around six weeks with a bad shoulder injury this time last year and we know how that ended. 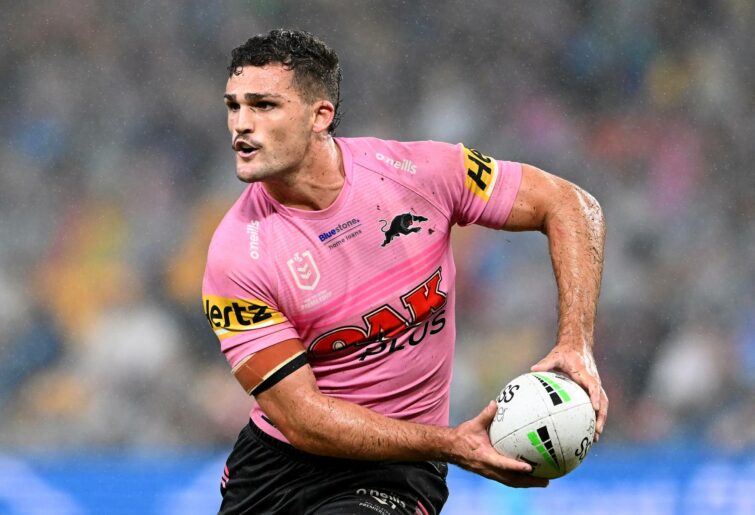 There’ll be a lot of noise around the Panthers being vulnerable but as I said a couple of weeks ago, none of this matters to the mountain men until Week 1 of the finals.

Five matches for Nathan Cleary for upending Eels five-eighth Dylan Brown, a week for Tom Burgess after being (harshly) sent off for a high shot in golden point against Cronulla, and Brisbane’s Pat Carrigan in all sorts after being sent straight to the judiciary for a shocking third-man hip drop tackle which broke Wests Tigers’ Jackson Hastings’ leg and ended his season.

That’s three players who play a key role for their teams. Carrigan will be lucky to return for a week or two of the finals – but with the judiciary the way it is maybe he’ll just get a fortnight’s suspension.

Cleary is back for finals Week 1 (see above), Burgess will miss at the Bunnies’ must-win-and-likely-will-win game against New Zealand.

It’s not great for Brisbane to go without Carrigan as they chase a double chance and a worrying performance against a committed yet hardly world-beating Tigers side should be giving Kevin Walters a few thoughts this week.

Thursday night’s game was a lamentable display of rugby league from Manly and the Roosters, a horrible one to watch. The reasons why the Sea Eagles were shorthanded have been covered here on The Roar and across the universe, but after a week of turmoil Manly were meritorious enough in a 20-10 defeat.

Problem is, that effort didn’t bring two points and Manly now face one hell of a battle to just finish eighth.

If Des Hasler’s men can’t get over Parramatta this week, it’s more than likely season over.

As for the Dragons, their 34-8 submission to North Queensland wrecked their already poor for-and-against, and they’re now in 10th with no real indication of being able to consistently challenge anyone who’s any good.

It may be a merciful end if the Dragons have their flickering season finally extinguished in Cronulla next Saturday night.

– Juuuuust take a beat for a week or two before you write off the chances of the following teams: Brisbane, South Sydney and Melbourne.

– A $3000 fine for Roosters prop Jared Waerea-Hargreaves after forcing his elbow onto the neck of Sea Eagles debutant Zac Fulton. Hmm.

– Canberra’s Joe Tapine got 10 in the bin and fined for contrary conduct for starting a stink in response to being taken out by a third-man tackle from behind (which was cleared by the bunker). Didn’t matter to the result, but an interesting event nonetheless.

– Yes, another quick hit celebrating the Bulldogs and their new zest for life under Mick Potter. A day out for winger Jacob Kiraz with his first hat-trick, including a belting cross-field kick from his fellow wideout, Josh Addo-Carr.

– Melbourne kept New Zealand well enough in hand to win their first game in a month. They should welcome Xavier Coates back from injury for Friday’s early game against the Titans.

– Another bad, bad head knock for Roosters prop Lindsay Collins. Surely there are questions around how he approaches the remainder of the season.

– Knights coach Adam O’Brien is on the Knights’ books until end 2024 and in his defence, he’s barely had his first-choice team available this year due to injury. Will they give him enough time to ‘coach the hell out of’ his plan?

Round 21 has some potential beltings, but let’s hope together we get close upsets and season defining outings.

Thursday night the Roosters host Brisbane at the SCG in an important game for both. Friday night’s early game is in Melbourne as the Gold Coast while their season away, while Manly have their shot at the Eels in prime time.

Saturday’s games have South Sydney playing New Zealand on the Sunshine Coast, Canberra hosting Penrith in what could be a great game and Cronulla welcoming St George Illawarra as the Sharks look to stay top four.

On Sunday Canterbury and North Queensland play in Bundaberg and the Tigers go for two wins in a row when Newcastle come to Campbelltown.

What did you take from Round 20, Roarers?

RIP, Bill Russell, an NBA star who stood for more than just basketball