Ahead of the Brisbane Broncos’ clash against the St George Illawarra Dragons at Suncorp Stadium this Sunday, let’s take the time to head down memory lane as we revisit the former club’s first ever premiership win.

The year 1992 marked a historic one for rugby league in Australia – as it marked the first time the game’s holy grail was transported north of New South Wales after just over eight decades.

It also happened to be the year that the AFL premiership also left Victorian borders for the first time, with the West Coast Eagles taking the cup to Western Australia upon defeating the Geelong Cats by 28 points in the Grand Final.

The Broncos, competing in its fifth season, finished on top of the ladder for the first time and qualified for its first Grand Final where they were to be pitted against the St George Dragons.

They came up against a Dragons side that were coached by Brian Smith and featured future NRL coaches Mick Potter and Matthew Elliott.

The Red V went into the Grand Final having not won a title since 1979, and also had the burden of Sydney on their shoulders in an attempt to prevent the premiership heading north of the Tweed for the first time.

But, in a clinical display, the Broncos produced a masterclass in front of 41,560 fans at the Sydney Football Stadium to claim its first title, with Langer scoring two tries and Matterson potting four goals from five attempts.

To celebrate that title, the home side will sport a heritage guernsey similar to the 1992 design in Sunday’s game against the Dragons at Suncorp Stadium.

It was the first of six titles the Red Hill-based club would win, also successfully defending its title the following year with another win over the Dragons, who would later merge with the Illawarra Steelers before claiming their first title as a merged entity in 2010.

Coincidentally, the Dragons side that romped to the premiership in 2010 would be coached by Wayne Bennett, who oversaw all six of the Broncos’ premierships, and in the Grand Final that year they defeated the Brian Smith-coached Sydney Roosters.

Going into 2022, the club is currently experiencing its longest premiership drought, with fifteen completed seasons having passed since that glorious night at Accor Stadium on October 1, 2006.

The club very nearly broke that drought in 2015, only to suffer a heartbreaking golden point loss to the North Queensland Cowboys in that year’s decider, which many regard as the greatest in the NRL era.

After a period of regression in the intervention, the nadir of which was a wooden spoon in 2020, the present-day Broncos have emerged as title contenders with the club’s playing list having been overhauled by coach Kevin Walters, who is in his second season at the helm.

Despite this, the Broncos go into their round 17 clash against the Dragons having lost their past two matches, against fellow finals contenders the Melbourne Storm and North Queensland Cowboys, both away from home.

Those followed a seven-match winning streak, the club’s longest since 2017, in a clear sign that the club is making some well overdue progress under Walters, with experienced recruits Adam Reynolds and Kurt Capewell leading the way.

They will be without Capewell, Selwyn Cobbo and Payne Haas, among others, due to injury and Origin commitments.

They have also lost their past five matches against the Dragons, having not beaten the men in the Red V since late in the 2017 season, all this coming after Ben Hunt left the Broncos at the end of that season to chase big money and success at Kogarah Oval.

Hunt will not feature for the Dragons on Sunday due to being in Queensland Origin camp, leaving another ex-Bronco, Andrew McCullough, to lead the Red V out onto Suncorp Stadium.

With the Broncos and Dragons sitting in fifth and eighth position on the ladder respectively, it means that if the regular season was to stop now and the finals be brought forward, this match would be the first elimination final.

The teams did meet in a knockout final just under four years ago, with the Dragons handing the Broncos their worst ever finals loss at home with a 48-18 thrashing at Suncorp Stadium.

Despite their recent form slump and their poor record against the Dragons, the Broncos are tracking well in their bid to return to finals football, but any talk of a premiership returning to Red Hill might still be far off especially when the Penrith Panthers are still dominating.

Kevin Walters’ side will not get another shot at the premiers this season, unless they cross paths in the finals, while they still have to play the Storm and Dragons each for a second time after this weekend and are still to play the Parramatta Eels, whom they face twice.

As for the Dragons, they go in on the back of a last-gasp but controversial 12-10 win over the Canberra Raiders, having avoided conceding a penalty right at the death with the Raiders within ten metres of scoring. 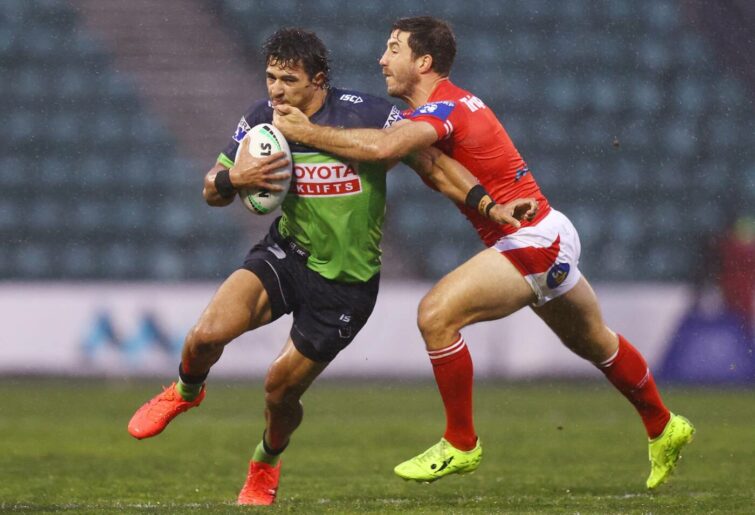 It was their second straight win, after also defeating the Rabbitohs by 32-12 just prior to the representative weekend, and while they sit in eighth place on the ladder their points differential of -70 is the worst by any side in the eight.

Anthony Griffin’s side will be aiming for a sixth straight win against the Broncos, which would still be two short of their best winning streak against the men from Red Hill, set between 2005 and 2009.

This includes a hat-trick of wins in 2006, the year of the Broncos’ most recent premiership, and had the Dragons beaten the Storm in that year’s preliminary final they would’ve fancied their chances of completing a clean sweep in the Grand Final.

Their most recent meeting, in round 13 last year, saw the Dragons rack up a half-century against the Broncos for the first time in club history as they recorded a 52-24 win at Kogarah Oval, where the northerners remain winless since 1998.

Sunday’s match is the first of two at Suncorp Stadium in four days, with the third and deciding State of Origin match to take place on Wednesday night, and is also part of a huge day of sport in Brisbane with the AFL’s Brisbane Lions facing Essendon across town at the Gabba earlier in the day.