Richmond are no longer premiership contenders

I sent a text to a few people just before the bounce yesterday evening that was to the effect of “if we win this with all the outs, we are genuine premiership contenders”.

Both Richmond-supporting mates and others either agreed or said that we already are. After having watched the game and the collapse, I am now convinced that even if we make the finals, we are not true contenders to win the whole thing.

For the first two decades of my life I knew only one thing when it came to football: misery. Losses like the one on Saturday evening to the Gold Coast Suns were quintessential Richmond. So much so that the term ‘Richmond-y’ was coined and used to define a loss that was so improbable so as to verge on impossible.

Richmond specialised in these losses from about 2004, when I started to take a keen interest in the AFL and the Tigers specifically, through Round 9 of the 2017 AFL premiership season when the tigers lost to a Jeremy Cameron goal from the centre square that was the direct result of a missed handball to a lumbering Toby Nankervis.

The specifics of a Richmond-y loss from the pre-2017 era are as follows:
· Genuine hope for the season;
· A big, seemingly insurmountable, lead;
· Usually there is one truly dominant performance by a Tiger; and
· A goal at or near the siren by an unlikely source.

Pursuant to this criteria, I have compiled a list of the worst Richmond losses in my memory, not including any from a premiership season because those just honestly wash away in my mind. They are in chronological order, starting from the most recent:

· Fremantle 2015: Mundy’s first goal after the siren against the Tigers, found by Garrick Ibbotson. Garrick Ibbotson’s family are the only people who remember his AFL career.

· Carlton 2013: The birth of my genuine dislike for Chris Judd. Glad to see the rest of Victoria jumped on that train with me over the lockdowns.

· Gold Coast 2012: I will not even type that Hunt’s name. The name has been trending for 16 hours at the time of writing.

· Essendon 2007: Richo hands in the back. I still remember the look of bemusement on Richo’s face when the free was paid against him being plastered on the front of The Sunday Age: Sport the following morning.

Not included in the list are the various drubbings suffered by the Tigers. The most prominent one is the one at the hands of Port in the 2014 elimination final largely because the Tigers were out of that game as soon as Trent Cotchin pointed that he wanted to kick into the wind. He could barely lift his arm, the gale was that strong.

I also could have included Geelong 2007 and Sydney 2015 but frankly we were just never in those games.

Also not included is the 2015 elimination final against North because the girl I was casually seeing at the time paid me a visit after the game at Jolimont Station. So dejected did I look that she agreed to officially become my girlfriend, so that was a big moment for me even despite the loss.

She is from overseas and had never had a chicken parma and we had one at a pub on Bridge Road after the game. It was almost too easy. The parma also helped soften the blow.

The Gold Coast game on Saturday evening could comfortably form part of that list, but in my opinion there was an added layer that wasn’t present in all the heartbreaking losses pre the premiership: arrogance.

This Richmond side has been either a good or a great side for a long period of time, now.

I am not breaking news here when I report that the Tigers have won three premierships since 2017. I remember that.

It feels like the Tigers players do as well. The problem is that the younger players did not win those premierships and the older guys who did win the premierships still look and carry themselves in basically the same way, but they cannot perform the same way.

Let’s look, for instance, at Jack Riewoldt. I want to preface this by saying that I love Jack and genuinely do think he should go on another year because of the quickness of his mind and his exceptional forward craft. But he is cooked as an athlete.

He is putting it together with spit and duct tape. It’s reminiscent of Muhammad Ali in the mid-’70s, between Frazier II and Shavers. The incredible foot speed and stamina that Cassius Clay defined himself by were gone, by this point he is just getting by on toughness, experience and most importantly, guile.

Jack is doing the exact same thing this year.

But if you’re a Richmond fan who watched last night and were not a little sad to see Jack jumping at marks all night long and just not getting anywhere near as high as he once did, I say that you are just lying.

How can you not see all of his ‘unrealistic attempts’ last night and not think of the last time that ‘Jack and mosquito fleet’ worked in 2017, when Jack was still a pretty dominant power forward who clunked everything in the first half of that grand final?

I fell victim to the arrogance last night as well. We were up by 40 points early in the third quarter and I felt the game was won. I started cooking dinner and had the game on in the background. 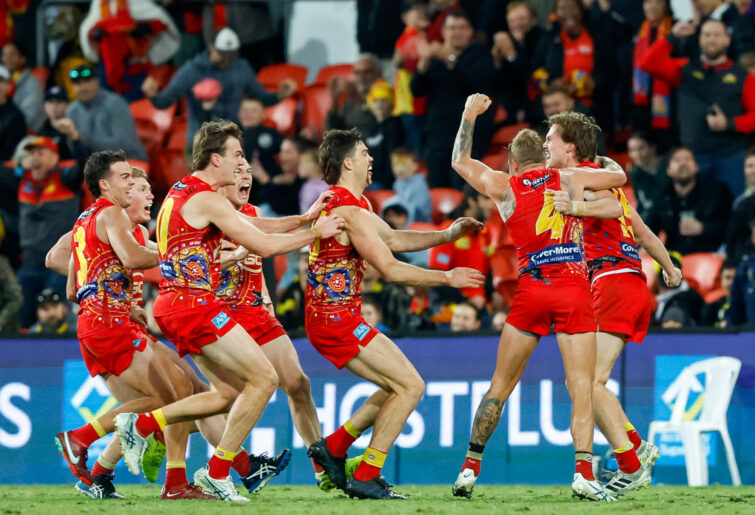 Noah Anderson of the Suns celebrates after kicking the match winning goal. (Photo by Russell Freeman/AFL Photos via Getty Images)

Closer and closer they crept, but we kept kicking goals at just the right time to put me at ease. I was like James Caan (RIP) in Misery, wary but not altogether terrified until Kathy Bates found out that Misery Chastain was dead. That moment for me came when Maurice Rioli and Jake Aarts both missed gettable goals halfway through the fourth quarter and Sam Day responded with a goal of his own a minute later.

The hobbling happened when Castagna got Nick Riewoldted. I knew what was happening but I did not want to acknowledge it until I had no choice.

Is it obvious that my girlfriend (that same girl from 2015) and I watched Misery after the game just to lighten my mood?

But truly the impetus for my writing here is that I think this loss has confirmed my biggest fear and the likeliest reality for this season.

The Tigers are not premiership contenders.

To steal from Jerry Seinfeld, the laundry is the same. The players filling those jumpers are largely the same people, but they are not the same players. Jack is breaking down, Grimes is still excellent but he dropped a chest mark at the end of the game that he takes 100 out of 100 times two years ago and Lynch’s injury woes are really starting to affect his season.

On top of that, Dusty is injured – something that I didn’t have to say or think about for the first decade of his AFL career, Cotchin is hurt, and Vlaustin was punished again for his ill-discipline and short temper.

As an aside, social media was awash with abuse for Jason Castagna. I understand that. I do believe he has been replaced by Maurice Rioli who is a better, more rapid pressure player and a far better player with the ball in his hands. But this loss is not a Castagna loss.

His pressure caused many a forward half turnover. This is a Vlaustin loss. It’s not Dusty’s fault he got hurt, nor is it Cotchin’s fault that he’s hurt. They could not have helped us.

Vlaustin could have helped stem the tide, but he wasn’t allowed to be there. Why? Because he couldn’t help but punch a West Coast player in the guts after the game was won.

He deserved a week, got a week, and cost us either a finals birth or at least ladder position.

The younger/newer players are playing well, especially guys like Pickett who has been exceptional, Rioli in a new role, Baker and MRJ but those guys are not quite good enough to pick up the slack for the slippage at the top of the list.

Even guys like Broad, Prestia and Bolton who are in career best form and are genuinely classy players are simply not proving to be enough to pick up the dead weight.

We have a soft run into the finals and I still think that we are pretty likely to make it given the St Kilda loss last night. Maybe we will get healthier, and maybe the Tigers will be fine overall and make a run at the flag, but I will be surprised.

This loss felt all too familiar, but the added ingredient of ego made it sting all the more.

Here’s how we can simplify Origin eligibility criteria