Former St Kilda captain Nick Riewoldt has lashed his old AFL club’s effort against the Western Bulldogs, accusing the Saints of again failing to stand up when it counted.

The Saints turned in a lamentable performance against the Bulldogs on Friday night, their 28-point defeat a flattering scoreline after a first half that included just 11 tackles.

It meant they missed an opportunity to jump inside the top eight, instead slipping to 10th as they look to play finals for only the second time in 11 years.

Riewoldt accused the Saints of failing to back up their words with action after suggesting tackling pressure would be a hallmark of their games this season.

“But they don’t value pressure like they have potentially in the past,” he told Fox Sports.

“The Western Bulldogs walk away from the game having expected a fierce contest, and they were never challenged, so I can’t explain it.

“I can’t explain what’s happened to a team that was 8-3 and has been able to reel off one win in the last six games.”

“We will talk, we will tell you this is what we are going to do and we don’t have the ability to go and act on that,” he told Fox Sports.

“That’s a damning indictment of a footy club.”

Riewoldt said a tactical ploy for the Saints to move the football slowly was “either a flawed strategy or non-adherence to whatever the strategy was”, adding they again hadn’t handled a big occasion.

The Friday night clash was an eight-point game, with the Bulldogs jumping the Saints into ninth position.

“It’s almost like what we saw, remember round one, when St Kilda came out in the first half against Collingwood, massive build-up, massive stakes, prime time and it was a passive, passive effort,” he said.

“Get the football, non-threatening, happy to just let the game flow out.” 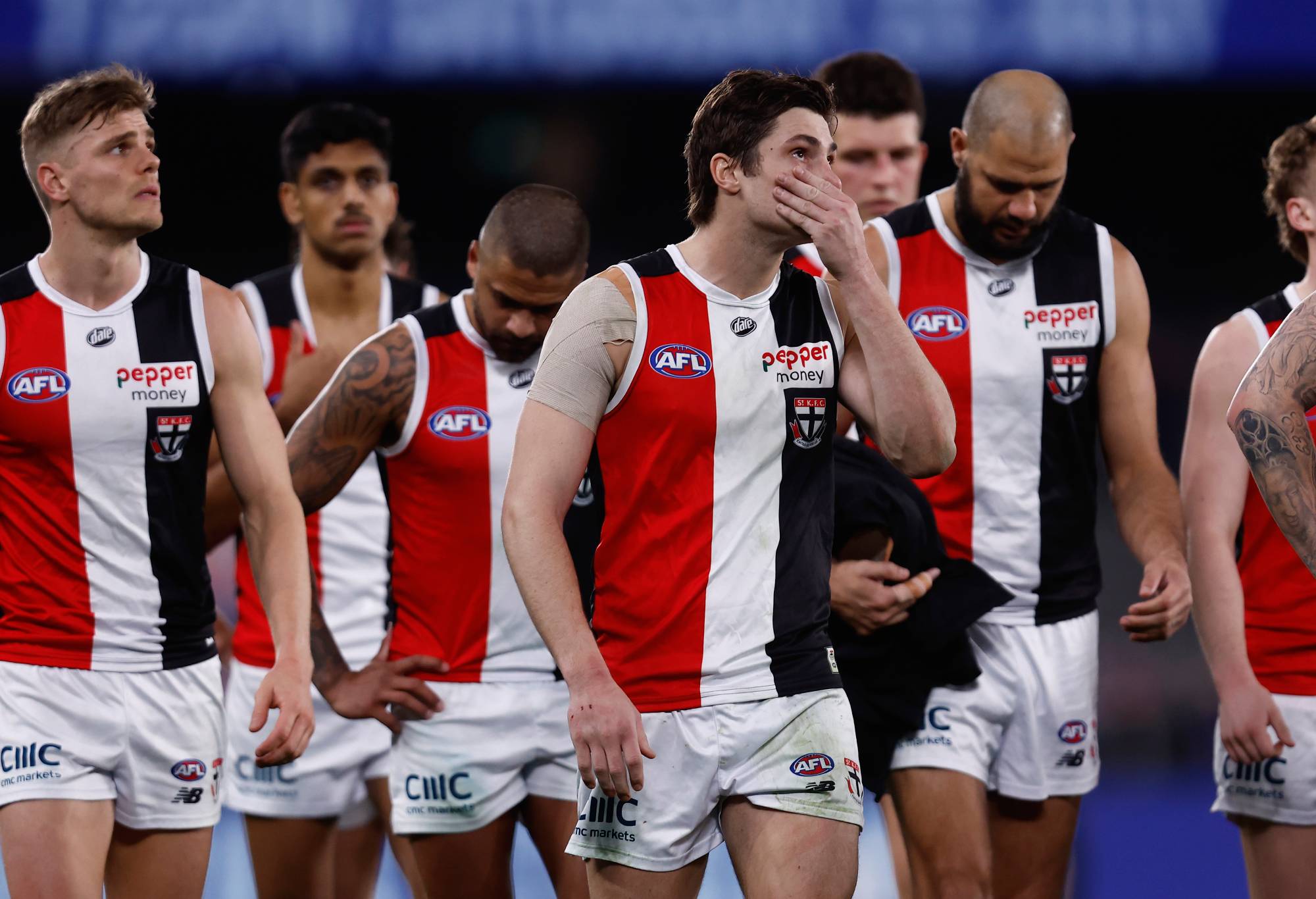 Dejected St Kilda players walk from the ground after the round 18 AFL match against the Western Bulldogs. (Photo by Darrian Traynor/Getty Images)

Ryder season could be over

Star St Kilda veteran Paddy Ryder could miss the rest of the AFL season, casting doubt on his AFL future.

The dynamic ruckman hurt his calf late in the Saints’ disappointing 28-point loss to the Western Bulldogs on Friday night.

St Kilda on Monday confirmed Ryder would miss between four and six week after scans revealed damage to his calf.

With five home-and-away rounds remaining, the Saints sit 10th on the ladder and face an uphill battle to quality for the finals.

Though 34, Ryder remains one of St Kilda’s most important players and forms a lethal ruck combination with Rowan Marshall.

But out-of-contract and with a history of soft-tissue injuries, Ryder is no certainty to play on next year.

Having debuted in 2006, Ryder has played 281 games, including 38 for St Kilda after moving to Moorabbin from Port Adelaide ahead of the 2020 season.

Saints teammate Dan McKenzie has also suffered a calf injury and will miss up to six weeks.

Carlton have opted against challenging the two-match AFL suspension handed down to Will Hayes for the dangerous tackle that concussed Geelong’s Sam Menegola.

Hayes tackled Menegola to the ground during Saturday night’s clash at he MCG, not realising the Cats midfielder had already lost control of the ball.

There did not appear to be any overt malice in the incident.

However, Menegola’s head struck the ground and he had no way of protecting himself, which led the match review officer to his decision.

The incident was assessed as careless conduct, high impact and high contact. Menegola had to be substituted out of the match.

Former Western Bulldogs midfielder Hayes was playing his second match for Carlton – his first in the starting 22 – since being selected in the mid-season draft.

The 27-year-old had 23 disposals in an impressive display but will now miss matches against GWS and Adelaide as the Blues chase a top-four spot.

Menegola has already spent time on the sidelines because of concussion this year after receiving a head knock during a VFL match in April.

Meanwhile, Hawthorn midfielder Tom Mitchell has been offered a $1000 fine for making careless contact with an umpire during his side’s win against West Coast on Sunday.

Gold Coast’s Matt Rowell has also escaped with a financial sanction, copping a $2000 whack for a dangerous tackle on Jye Caldwell in their loss to Essendon.

Richmond will be without Dustin Martin and Tom Lynch as they look to bounce back from consecutive defeats in their crucial match against Fremantle.

Martin and Lynch suffered hamstring injuries in rounds 16 and 17 respectively, and were sidelined in Saturday’s costly upset loss to North Melbourne.

Richmond had hoped they would be fit to return against the Dockers at Marvel Stadium on Friday night, but the Tigers on Monday put a line through the pair for another week.

In better news for Richmond, Ivan Soldo (thumb), Sydney Stack (fractured cheekbone) and Jack Ross (knee) are expected to be available for selection.

Young defender Josh Gibcus is a chance to play despite being substituted out of the Kangaroos loss with a shoulder injury.

Richmond (9-8) are clinging to eighth spot, having lost their past two matches by a combined six points.

They have lost three of their last four ahead of the meeting with fourth-placed Fremantle (12-5), who dropped a home game against Sydney last week.

And Adelaide teen Josh Rachele is expected to spend at least another week on the sideline nursing the hip complaint that has sidelined him since round 16. 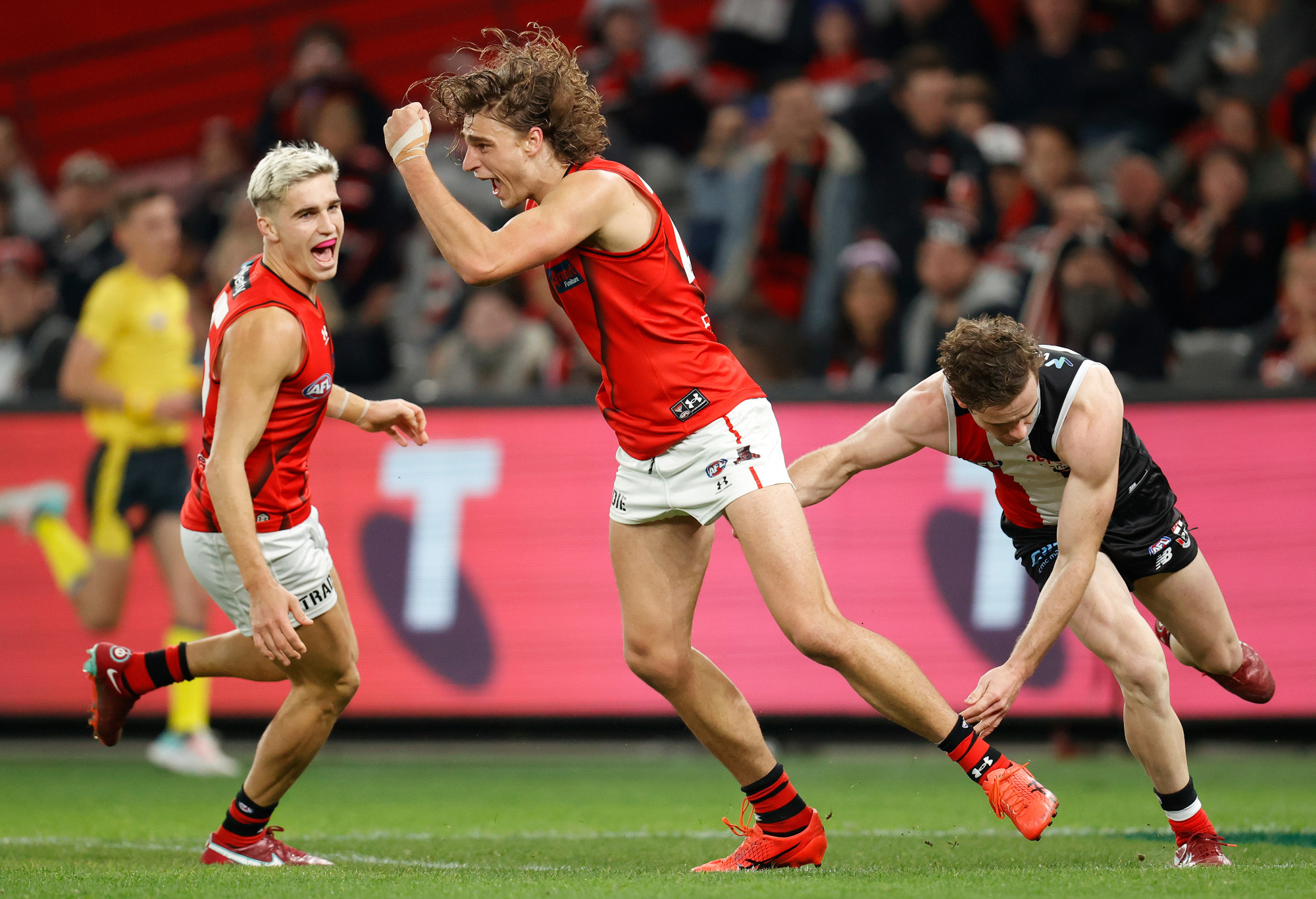 Rutten safe after Blues get out of rut

Essendon coach Ben Rutten feels his job is safe after a three-game winning streak that has revitalised the Bombers’ stuttering 2022 campaign.

While the club has undertaken an internal review, announced when they were reeling at 2-10, the second-year coach appears set to fend off calls for a change at the helm of the Bombers.

His side has beaten finals-bound Sydney, a COVID-depleted Brisbane and top eight-aspirant Gold Coast in consecutive weeks, and Rutten believed he’d shown what the Bombers could be capable of with him in charge.

“I’ve got a lot of belief about what this group is capable of, and we’re a developing group and we’re starting to learn about each other,” he said.

“And the last few weeks have been really important for us to get a bit of belief and a bit of confidence in what we’ve been doing.

“There’s a lot of work getting done that’s starting to bear a bit of fruit now, there’s always a bit of a lag effect when you start doubling down on a few areas, you don’t quite see the results probably for four to six weeks, potentially, after the fact.”

While acknowledging reviews can often spell the end of a coach’s tenure, Rutten said he’d rely on his continual dialogue with Essendon heavies to feel confident he was not in the firing line.

“Certainly we weren’t having from a results point of view a season we liked and part of the process of getting better and continually defining your best is reviewing and making sure that we’re looking at all areas.

“My role is to support the players and continue to lead and direct the club … hold the vision. That’s been a really good learning period for me as a less experienced coach and we’ve put a lot of work in the last month to six weeks.”

Meanwhile, Rutten confirmed Essendon would offer captain and unrestricted free agent Dyson Heppell a contract, as the 30-year-old is linked to other clubs.

“We absolutely want him at our club next year, there’s no doubt about that,” he said. “I know ‘Hep’ is keen to stay, so it’s about getting the finer details sorted.”

AFL chief executive Gillon McLachlan says staying COVID-safe is just another area where clubs must be disciplined if they want to win a premiership.

The league is insistent it will continue to push through surging case numbers and won’t postpone even finals should a team be wiped out with a number of absences through health and safety protocols.

While a return to ‘bubbles’ and mandating other stricter procedures seems off the cards, McLachlan suggested clubs would take it upon themselves to minimise the risk if they wanted to contend at the back-end of the year.

“It feels there’s another surge going on now and we all know the steps we can do to protect ourselves, and I know the clubs know that and the players know that,” he told the Seven Network.

“It’s individual responsibility … the players need to live their lives but we all know this is a discipline and resilience competition.

“The most disciplined clubs are going to have the most players available and I think everyone understands that and I know the players do.”

Brisbane lost five players for their round 17 clash with Essendon and their club was locked down the following week, highlighting the impact the virus could have on teams potentially in finals.

Geelong coach Chris Scott admitted COVID-19 avoidance was “towards the front of the queue” of his club’s thinking.

“The AFL have given us some advice, at-the-margin type stuff like, which actually helps us,” he told Fox Sports.

“The AFL suggests we don’t have superfluous people in the rooms pre-game or post-game, it’s easy to say no when that advice has come from the AFL.

“We’ve got a responsibility to the community as well to lead and so what we’re saying to our players is you’ve got to take this seriously … 25-year-olds getting really sick at the moment who are vaccinated, it’s unlikely that’s going to be the problem, but the contagion is a problem.

Scott said teams would have to be ready for the challenges the virus could throw up and not be rattled when that happens.

“You’ve just got to accept that some curve balls will be thrown your way and then it’s a matter of not overreacting when they inevitably come.”

Benefits Of Micro Mining in the Cryptocurrency Industry