The players’ union have issued the NRL’s integrity unit with a please explain over the handling of the Kalyn Ponga and Kurt Mann investigation, furious the pair have been drug tested.

Rugby League Players’ Association bosses contacted the NRL on Wednesday unhappy with the situation, also questioning why the pair were even being investigated at all.

Ponga and Mann remain in the spotlight after they were filmed being escorted out of a toilet cubicle at a Newcastle pub on Saturday night, while both are sidelined through injury.

The pair were since drug tested on Tuesday, with Ponga’s father claiming his son had merely been celebrating the purchase of a house when he fell ill and required Mann’s assistance.

RLPA CEO Clint Newton conceded the pair had brought the issue upon themselves, but questioned why the NRL was investigating.

“We’ve said (to the NRL) we think this is completely flawed,” Newton told AAP. 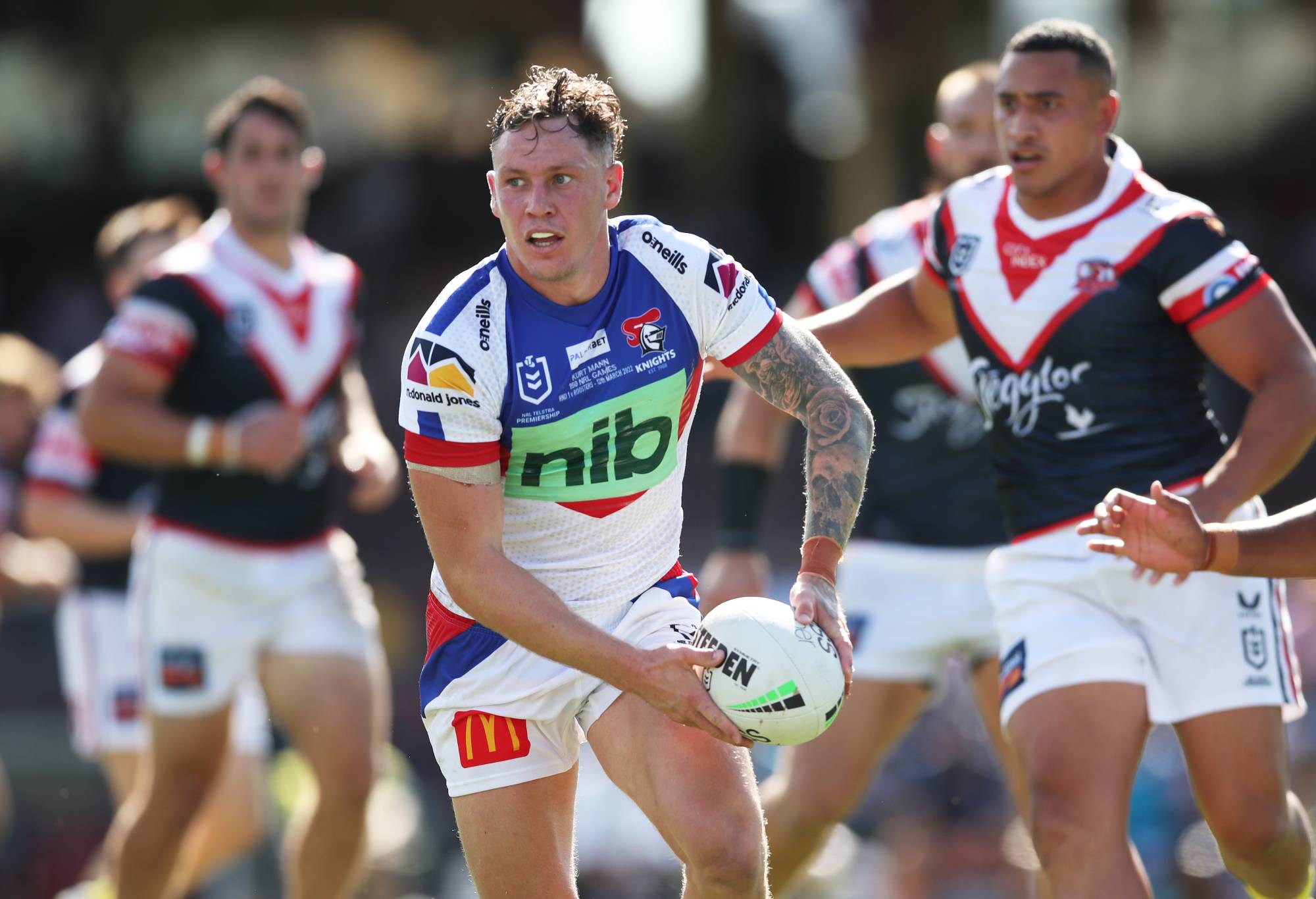 “What rule have they broken to warrant a code-of-conduct breach or some interview or that this warrants a target (drug) test? We are conflating the two issues here.

“One is the team cultural code that teams and club leaders plug into with regards to drinking whilst injured.

“That’s for the club to work through with players.

“The other is the process and the confidentiality of this test. They’re completely separate debates that are conflating into the same debate.”

Under NRL rules test results are not published, but players who receive a second strike are banned for 12 matches.

But Newton said the fact the Newcastle pair’s tests had gone public put pressure on the duo to announce their results.

The game’s in-season policy allows for players to be subjected to drug tests while at their clubs in a bid to deter the illicit use of substances and help players rehabilitate if they are using.

The policy of random testing also attempts to ensure players are role models for the game and that the sport’s image is protected.

But Newton said he did not believe targeted testing of Ponga and Mann fitted that bill.

“It has to be to protect the health and safety of the workplace (and that is) if a player is looking like they are turning up under the influence and they are presenting a risk to the workplace and the players. This is not it.

Newton’s comments come after NRL CEO Andrew Abdo insisted on Wednesday the policy had been followed.

He also insisted it was right for the integrity unit to look into the case given the public interest.

“No-one is saying that they have breached the rules, but clearly there’s been a lot of talk and a lot of media publicity around the incident,” Abdo said.

“Our job is to get all the facts and then make the determination. And not to prejudge anything.” 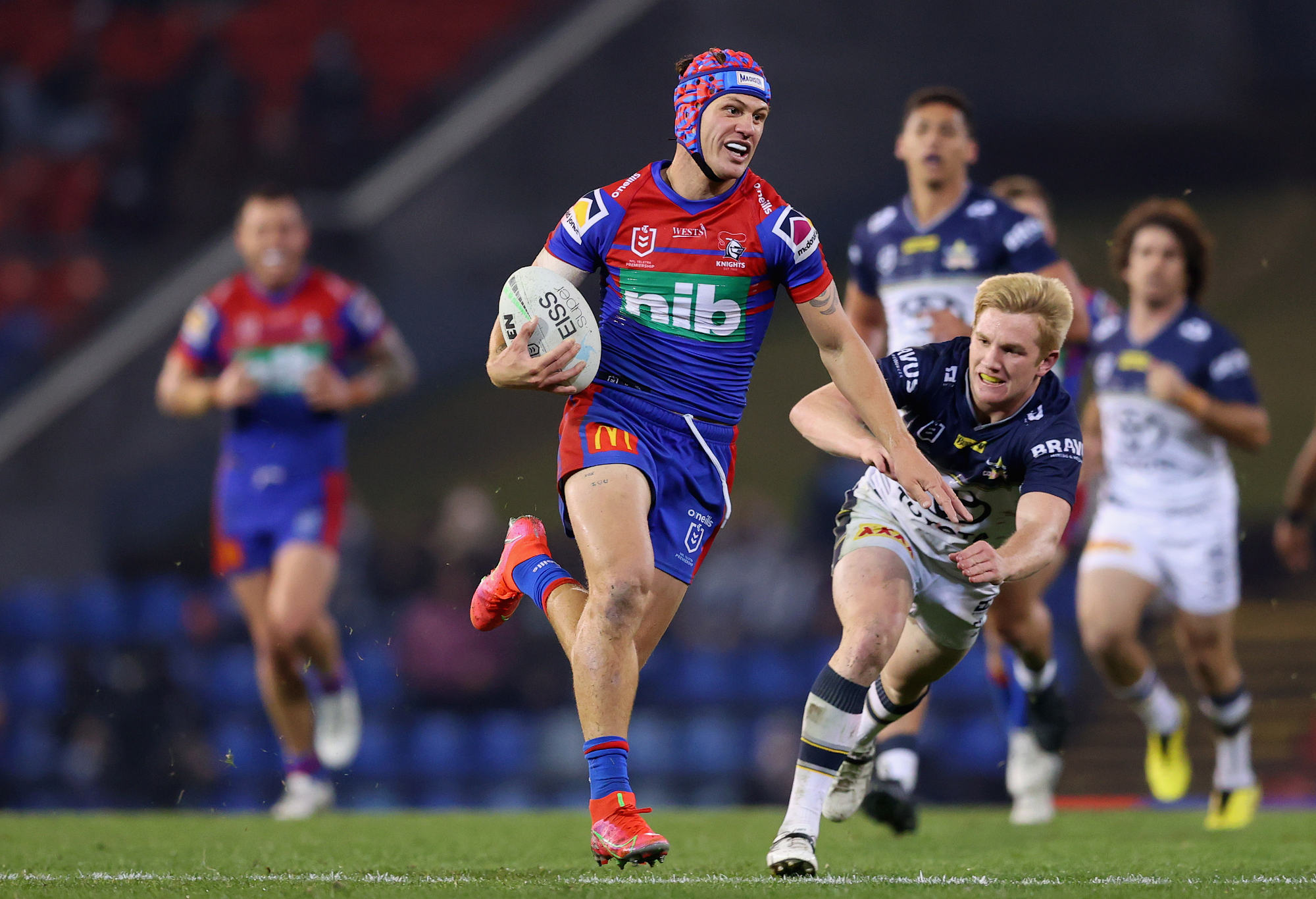 Munster to test the market

Cameron Munster is set to go to the open market with the Queensland State of Origin star wanting more money out of Melbourne before recommitting.

Munster is off contract at the end of next year and will technically become a free agent on November 1, when he will be cleared to take up deals from other clubs for 2024.

The Storm have been desperate to wrap up the five-eighth all season, with his contract becoming one of the ongoing storylines of 2022.

The situation has also played out publicly, with Munster’s manager and regular media talent Braith Anasta  and the Dolphins publicly admitting they have commenced talks to lure him north.

Anasta claimed on Wednesday night up to four rival clubs had already made contact about his client and unless things changed Munster would remain off contract come November 1.

“Cameron is still negotiating with the Melbourne Storm at the moment. They have been unbelievable throughout the process,” Anasta said on NRL360.

“(Melbourne owner) Matt Tripp is doing everything in his power to keep Cameron at the club.

“But as it stands right now it looks most likely at this point that we will go to the market in November. But things could change between now and then.”

Anasta also claimed Munster was willing to take less money to stay at Melbourne, compared to what he will likely have on offer from the likes of the Dolphins.

But he is also not ready to settle yet.

Melbourne still find themselves managing one of the most difficult salary caps in the NRL, with Jahrome Hughes, Harry Grant and Xavier Coates all re-signed earlier this year.

Ryan Papenhuyzen also inked a new deal midway through last season while the club has had to release Jesse Bromwich, Kenny Bromwich, Brandon Smith and Felise Kaufusi at the end of this year.

“I think ideally Cameron and myself would like them to move more on the salary cap than where they are at right now (to stop him going to market),” Anasta said.

“When they signed Papenhuyzen, Hughes, Grant and Coates that unfortunately limited their ability to move on the cap because they prioritised those players.

“That is where we are at the moment.

“Hopefully they may be able to move somehow between now and November 1.

“It doesn’t mean that he won’t sign before then because he loves the club. He may sign after November.”

Munster has been named at five-eighth for Friday night’s clash with Brisbane, but is every chance of starting at fullback after starring in the role for the past fortnight. 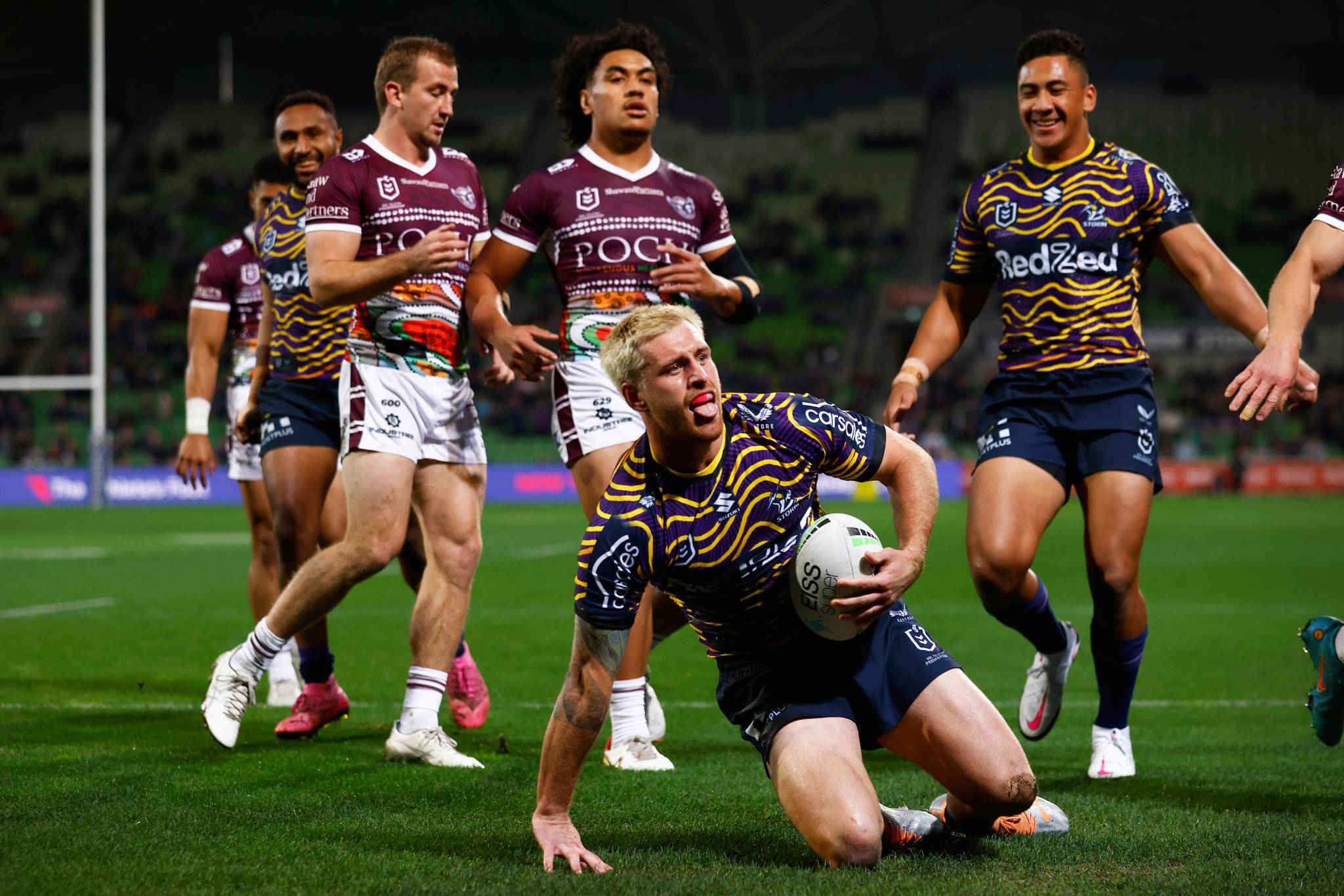 NSW premier Dominic Perrottet says he expects the NRL grand final to be played in Sydney despite offering less money than Queensland to host the event.

The ARL Commission finished lengthy discussions on Wednesday night with no resolution on the four-month stalemate that clouds rugby league’s showpiece event.

An announcement could still come as soon as Thursday afternoon, with both Queensland and NSW having offered their final pitch for the October 2 match.

Perrottet conceded on Thursday morning NSW’s offer did not match what Queensland were throwing at the league.

But he insisted he believed that the NRL would stick with tradition and play the match in Sydney, with last year’s game only moved to Queensland due to the COVID-19.

“The discussions are commercial in confidence, but (the financial bid) is less than what they’re offering in Queensland,” Mr Perrottet told Seven’s Sunrise program.

“But as premier of the state I have to make decisions in relation to the priorities that we have in front of us.

“We have many people up here in the Northern Rivers that are still not in homes (after the floods).

“But ultimately the NRL grand final has always been in New South Wales, it’s great for people of our state and my expectation is that is where it stay.”

The venue of the grand final was first plunged into doubt in April, when the NRL grew concerned that a suburban stadiums deal was yet to be put into writing. 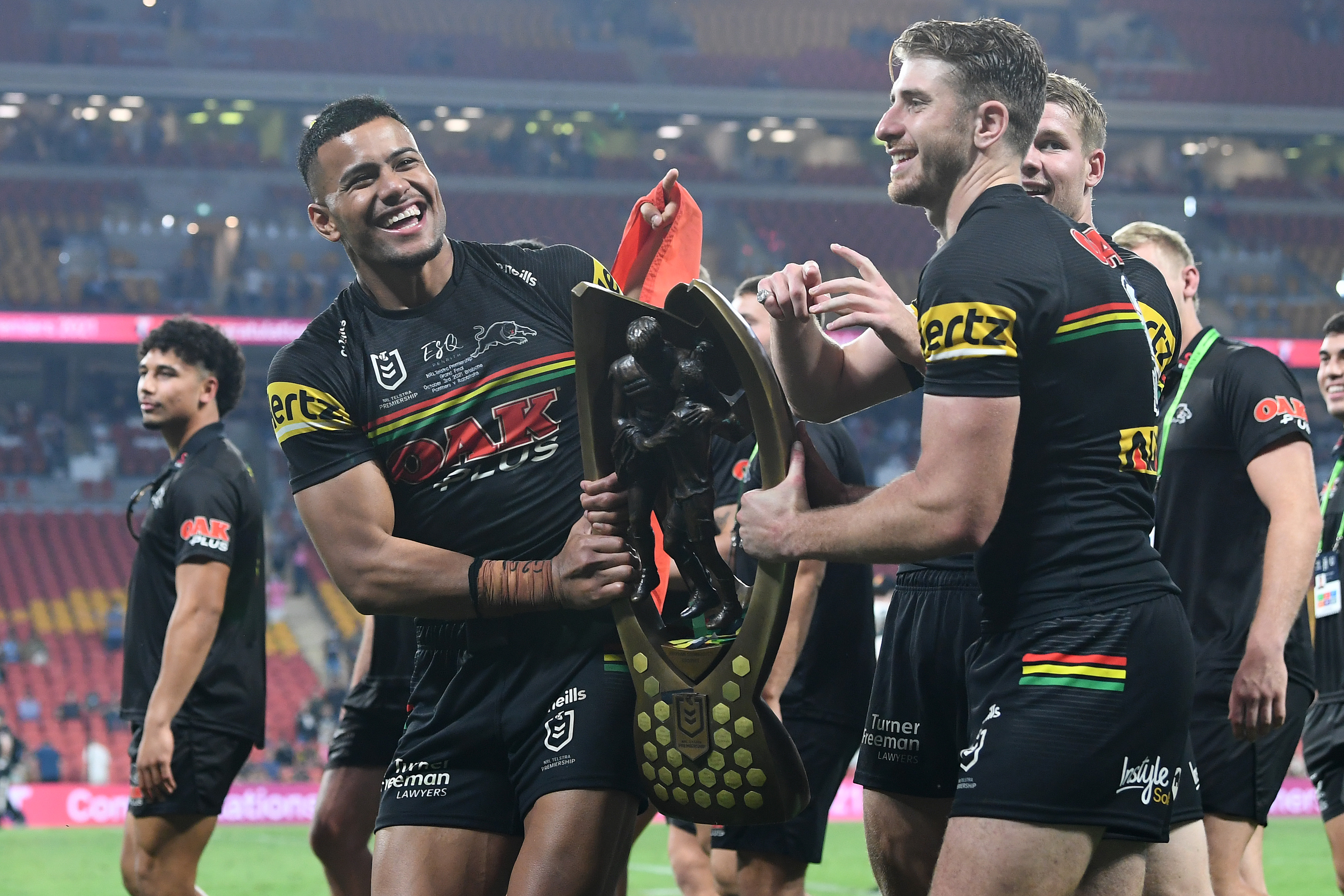 ARL Commission chairman Peter V’landys and Mr Perrottet then emerged from meetings confident peace had been brokered, with the match to be played at Accor Stadium.

However that was turned on its head a fortnight ago when the NSW premier confirmed that suburban stadium upgrades were no longer a priority, with money to instead go to flood relief efforts.

That angered the NRL, who claim the government has now gone back on a deal to keep the match in Sydney until 2042.

Queensland had emerged as marginal front-runners to host the event earlier this week, but any call is still far from certain.

“We put a reasonable offer to the NRL,” Mr Perrottet added.

“Ultimately I appreciate in relation to suburban stadiums that NRL takes a different view to us, but there are different commitments we have to meet every day.

“I’ve got to make those decisions and set out the priorities for the government.

“But the offer we have made NRL is completely reasonable, it’s a fair offer and it’s a great event for our state, great event for Sydney, that’s where it should remain.”

Acala Has Recovered Almost 3B aUSD

Daily Briefing: The Risks of Leverage

The neutrals guide to choosing a bandwagon