The Springboks stayed in the hunt for an elusive Rugby Championship title by scoring five tries against two-try Argentina in Buenos Aires, surviving a late scare to win by 16 points.

With the All Blacks in reach, both teams had incentive to play for a bonus point win. It was full sun in the capital as the stately anthem played.

The site of the game had changed: reddish Libertadores de America Stadium, home of Club Atlético Independiente was chosen after the playing surface was deemed unplayable at Estadio Velez Sarsfield.

A heavily leg strapped Santiago Carreras drew first blood. His opposite number Damian Willemse was held up in tackle.

However, Julian Montoya gave the ball right back by forgetting that pesky brake foot. This gave the Boks an easy exit; a theme of the first half, along with incessant warnings to the Pumas by the referee.

However, at scrum time, the Pumas were cleverly slipping the hit and getting rewarded. Frans Malherbe had a number of strong carries and even took a lineout, but he was 1-2 in scrum penalties, the first time he was bested in a long time.

On the Pumas feed, Marco Kremer packed down at blindside; part of an ever-changing Pumas loose trio configuration.

The Boks kept guessing wrong as to when the ball was out of the ruck, which led to all six points by Argentina, off the big booming boot of Emiliano Boffelli who has the most annoying pre kick routine in rugby now.

Willemse looks the goods at ten, but his boot will have to be re-educated. The Boks left at least seven points on the board.

A maul feint, with Marx splitting off, was a key tool. Finally, the pressure told. Marx split off, hit Canan Moodie on the fly, who stepped to a metre out and Jaden Hendrickse was tackled from an offside position by Carreras, leading to a penalty try, but an early tackle by Eben Etzebeth made it 10-6. He made up for that lapse with a berserker kick chase, which allowed the visitors to camp out in the Pumas 22 and score on a snipe by Hendrickse. At 17-6, it looked ominous.

Marx started to rule the ruck and was rewarded with a maul break off try to make it 22-6 after 33 minutes.

The Pumas oddly kept kicking to Jasper Wiese who kept running easy crash-ball for exits, but the rest of the half was a familiar problem for South Africa: knocking on the door and not earning any more points, but did force a second card against Argentina.

A certain try by Lood de Jager was disallowed for a juggle and Argentina may have felt relieved to be down ‘only’ by 16.

But as we have seen all season, the effort it takes to get all the way back from such a large deficit can sometimes be cruel at the end.

The second half opened with a mad back-and-forth three-intercept series, which may be a record, but it was scrappy for over ten minutes.

The Pumas simply could not calmly form an attack. The last pass kept going to ground.

Kwagga Smith came on and pilfered immediately. With 27 minutes to go, the penalty count was 15-6 against the hosts.

Pumas threw the kitchen sink at the Boks, who were forced to infringe several times to keep a Pumas attack at bay.

The delay in allowing the Pumas’ two tries saved the match for South Africa.

A stronger scrum and more poise by the Pumas led to more territory, and the 50-50 calls began to flow the other way.

Willemse was knocked out and replaced by Frans Steyn. The Pumas pounced and were rewarded when Smith’s holdup tackle was ruled to be foul and a penalty try was awarded. 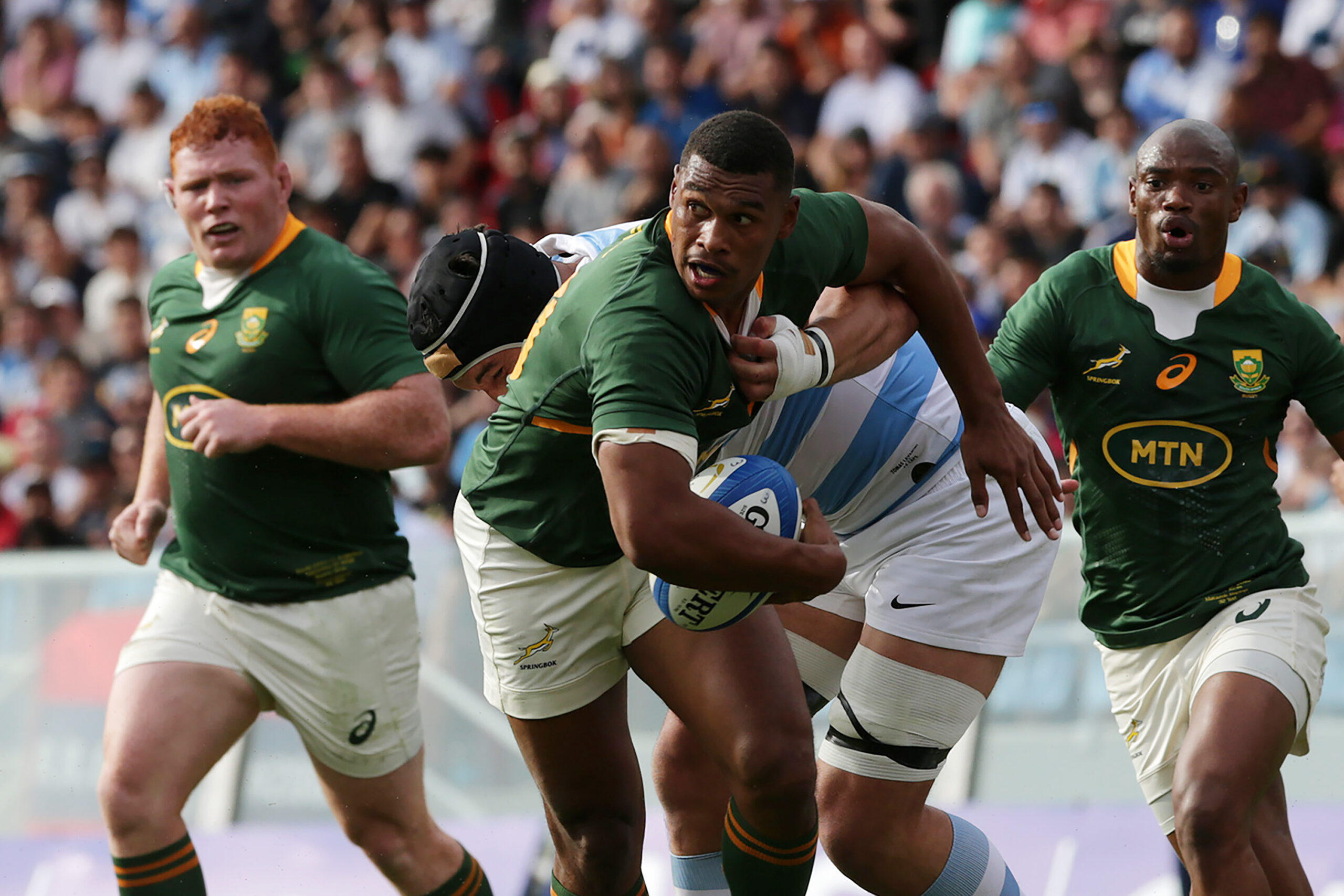 He joined Willie le Roux in the sin bin and with 13 minutes to go, only 13 Boks on the pitch, and just a nine point deficit, the crowd was raucous.

A lovely break by Argentina led to a possible try but there seems to be a forward pass by Tomas Lavanini who had a good game. It looked dicey but the TMO cleared it. The fans went ballistic.

Then, after the Argentine conversion was taken, the TMO checked Matias Moroni’s grounding, which always looked fine.

When Tomas Cubelli won a superb turnover, the stadium Buenos Aires was as loud as any in the land, even football.

But then, it was a tale of two halves of one half.

South Africa turned to Etzebeth, Marx and Steyn. Control was the word.

Steadily, the Boks asserted themselves into the red zone. A maul followed a maul, but then it was runners round the corner and Damian de Allende monstered his way over with that extra oomph.

At 29-20 the game was won, but there was still the matter of catching the All Blacks at 14 points to set up a final weekend finale (the Boks own the head-to-head differential).

The Pumas did everything but score to deny the world champions, showing brilliant hands but also running into clumsy corners.

Steyn’s tip tackle seemed to stymie the Boks at 13 log points, but then a Deon Fourie turnover gave that one chance the bloody minded Boks needed.

A sweeping movement to the left found Mapimpi at pace, and eighty minute man Marx finished it with a soft hands and astounding fitness.

So, 36-20 was the final score after big Steyn banged it through with gusto.

For the Boks, Jaden Hendrickse looks to have cemented his place at nine with aplomb. De Allende easily quieted the calls for Andre Esterhuizen.

Rugged kick chaser Etzebeth was in the middle of all of it with his old Stormers mates Malherbe, Kitshoff and Kolisi. Marx and de Jager were full value, along with Franco Mostert who just never stops grinding.

For Argentina, Julian Montoya and his loose forward friends were immense, with Marco Kremer a machine. But the slight Bok edge in the tight five seemed to win the day, along with just enough speed advantage in the backline to scramble most Puma forays. Several times the home team just needed an out-and-out flyer to round Mapimpi and Canan Moodie.

The game was played in a good spirit, with only one minor handbag dance, but it was as brutal as any collision sport is allowed to be and still be legal. There were 33 penalties whistled by the new referee; with four cards.

It is on to Durban (on the very same flights) where South Africa will know the number they must achieve after Eden Park, depending on how the Australian revenge tale goes.