Officials are bracing for a logistical nightmare ahead of Sydney’s Saturday night finals double-header, with close to 1000 parking spots likely to be closed off due to recent rain and government legislation.

The AFL and NRL finals at the SCG and the adjacent Allianz Stadium loom as the biggest back-to-back events in Sydney since the start of the COVID-19 pandemic, with close to 90,000 fans set to descend on the Moore Park precinct.

The night marks the first time major NRL and AFL matches have been played in close proximity since 2018, with Allianz Stadium only reopening earlier this month.

But, causing great concern for fans, situations have changed significantly since then.

Some 650 spaces on the grass fields opposite the SCG and Allianz Stadium became closed off in March, under the Greater Sydney Parklands Trust Act 2022.

The Lower Kippax section – closest to Allianz Stadium – is also currently shut off due to Sydney’s wet weather, ruling out another 300 spots for cars.

If it were to remain closed, it would leave only the Sydney Showground field, which takes some 900 cars, open for the double-header.

“The area currently reserved for parking on the grass at Moore Park has been significantly impacted by recent rain and parking for major events.

“As a result, the Lower Kippax section of Moore Park is currently closed.

“With more rain forecast for this week, further assessments will be carried out to ensure the safety of all Moore Park visitors.

“We continue to work with other government and non-government agencies to plan for large events at Moore Park to ensure they run as smoothly as possible.”

The Entertainment Quarter carpark near Fox Studios is also operating at limited capacity, with one level of the 2000-spot multi-storey currently leased out by hyper karting.

NRL fans are likely to be those to suffer, with Greater Sydney Parklands confirming they would operate on a first-in, first-serve basis.

FIrst bounce for the AFL preliminary final between Sydney and Collingwood is 4:45pm, with the NRL pushing back kick off for Cronulla and South Sydney to 8pm to allow for a gap between matches.

Officials have, however, pointed to the fact Sydney’s light rail is now operating, as opposed to when the two grounds last hosted events at the same time.

In turn, fans have been urged to use public transport .

James Tedesco has completed an historic clean sweep of NSW’s State of Origin awards night, regaining his status as the Blues’ premier player.

On a big night for the Blues captain, Tedesco claimed the Brad Fittler Medal, the True Blue Award for embodying the state’s spirit, and the fans’ choice award.

In doing so, he became the first player to claim all three major men’s prizes, and joins Jarryd Hayne as the only three-time winners of the main award.

Kelly becomes the first woman to go back-to-back as she joins Simaima Taufa as a three-time winner of the state’s highest honour.

Tedesco had previously won the award after NSW’s State of Origin successes in 2018 and 2019, and was brilliant in a losing side this year.

A clear standout for the Blues, he scored just one try across the series but bust through 16 tackles and averaged 245 metres a game.

He was also the most consistent player in the Blues’ team, as one of NSW’s best in their unsuccessful decider at Suncorp Stadium as well as the series opener in Sydney.

“It’s nice to be rewarded, but the ultimate reward is winning, so that that’s the focus.”

Tedesco’s award comes a day after he was ruled out of the Roosters’ season-ending defeat to South Sydney, suffering a concussion after a 18th minute hit from Tom Burgess.

The Kangaroos No.1 was one of only two men’s players to attend the ceremony, alongside Jake Trbojevic.

Penrith’s seven State of Origin players were unable to be attend, with the Panthers holding their own club awards on Monday night.

Several other players are also in the midst of finals campaigns, with this season’s awards brought forward due to the end-of-year World Cup.

ARL Commission chairman Peter V’landys and NRL CEO Andrew Abdo were other notable absentees, as the feud between the league and NSWRL continues. 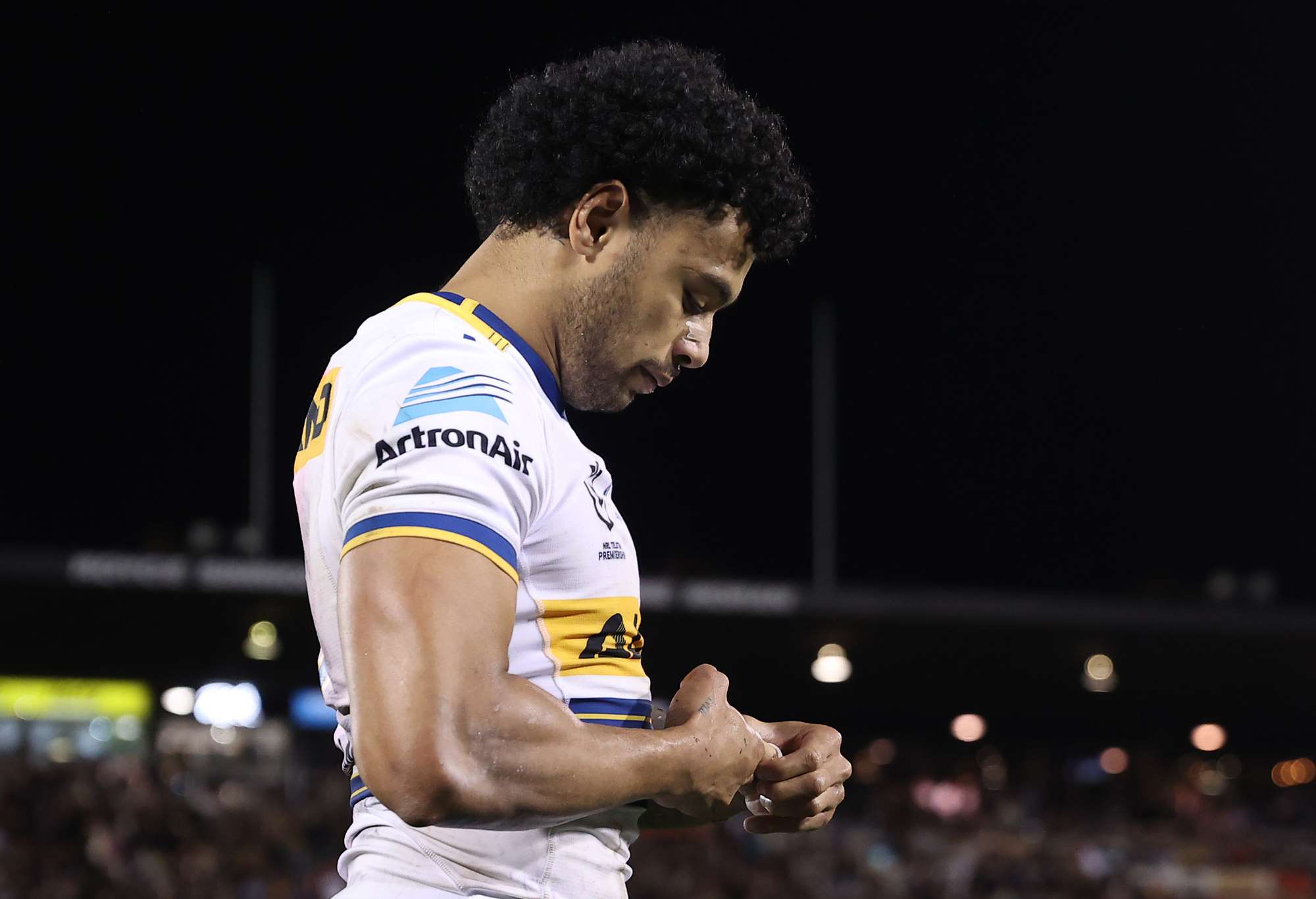 A defiant Waqa Blake claims he’s ready to be targeted by Canberra’s kickers, adamant nothing will be as difficult as trying to defuse Nathan Cleary’s bombs last week.

Blake fronted up to speak to media on Monday afternoon at Parramatta’s headquarters, just days after enduring a difficult opening to the finals against Penrith.

The 27-year-old dropped three of Cleary’s mid-field floating bombs in the qualifying-final loss, with two of the errors resulting in Penrith tries.

Canberra have already made no secret of the fact they intend to keep the pressure on him in Friday’s semi-final, with halfback Jamal Fogarty ready to pepper the Eels winger.

Regardless, Blake is not fazed. A former teammate of Cleary’s at Penrith, Blake told the NSW No.7 after Friday’s loss that he had “got him”. But well aware he will be targeted by Canberra, Blake enters Friday’s do-or-die match with the belief no other half has the expertise of the Penrith half.

“You have to expect (to be targeted) every week,” Blake said. “Every kicker in the NRL can float it, but Nathan is at the best of it. I am excited by the challenge. I know what I am capable of.”

Blake also refused to put the blame on his Eels teammates, with coach Brad Arthur laying the errors at the feet of his forwards for not putting enough kick pressure on Cleary.

“Kick pressure is important, but at the end of day it’s my job (to catch them),” Blake said.

“Nathan Cleary kicks, obviously everyone knows how good he puts them. But I made it hard for myself.”

Parramatta players have also since made a point of offering their support to Blake, while coach Arthur has told him it’s important to move on from the night.

“He’s just told me to flush it … that there’s nothing I can do now,” Blake said.

“We can’t go back and play Penrith again until later on. We can only focus on Canberra.”

But Blake won’t completely put the match to the side. He wants to spend extra time under the high ball at Eels training this week, trying to learn lessons from Friday night’s working-over.

“It’s what you do about it now (that matters),” Blake said “Do more practice, watch back what I can do better.

“But other than that it’s just owning my moments. I have learned from that now, and looking forward to this week.”

How to Get a Car Title Replacement