But while the 35-year-old Israel-Premier Tech rider was left in floods of joyous tears after edging a lung-bursting sprint to win the fifth stage in a photo finish on Wednesday, it proved a calamitous day for Australia’s biggest hitters on the Tour.

Jack Haig, leader of Bahrain Victorious, abandoned the race after a crash while AG2R Citroen’s Ben O’Connor, Australia’s top hope to win the title, had a disastrous day after a mechanical, finishing more than three minutes down on race favourite, champion Tadej Pogacar.

And there was more Grand Tour misery for Australian star sprinter Caleb Ewan, who took a nasty tumble when running headlong into a protective hay bale which had come loose at the side of the road with 30km left.

Clarke’s career-defining triumph came after a chaotic 157km ride from Lille to Arenberg, featuring more than 19km of the ‘Hell of the North’ cobbles around Roubaix, which had been expected to cause havoc – and most certainly did.

Belgian Wout van Aert was one of many to tumble off his bike but somehow came home unscathed to retain the overall lead.

Pogacar gained time over all his rivals including a huge chunk over his Slovenian friend and rival, Primoz Roglic, one of the pre-race favourites who also came down in the incident that floored Ewan.

Amazingly, though he dislocated his shoulder, Roglic popped it back in himself and continued – but at a major cost as he’s now already over two and a quarter minutes behind fourth-placed Pogacar before the Tour has even reached the mountains.

But it was the greatest day of Clarke’s 13-year pro career after the Melburnian, whose previous career highlights were winning two stages at the Vuelta a Espana and being part of a team time trial win in the 2013 Tour, pulled out all the stops to win by a hair’s breadth.

Sprinting out of the remnants of an early breakaway, the Australian timed his final fling perfectly in a thrilling four-man denouement, edging out Dutchman Taco van der Hoorn with a ‘bike throw’ for the victory. 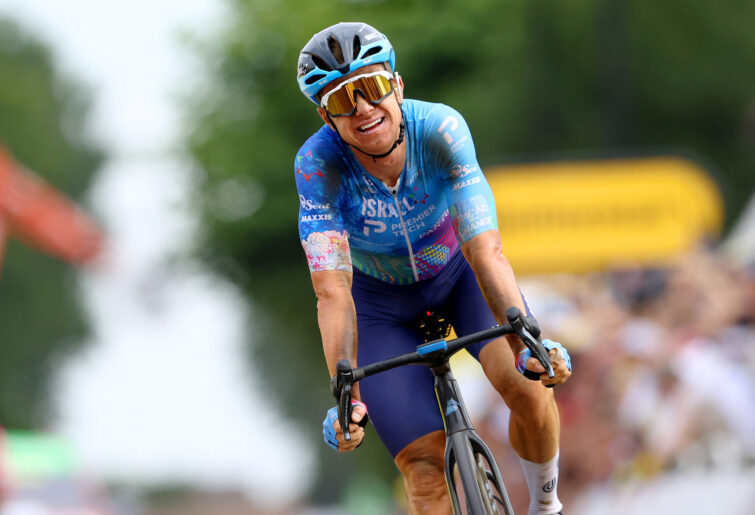 It was an amazing result for Clarke, who wondered if he’d reached the end of his career last winter when he was left without a team.

“To have Israel ring me up and say, ‘we’ll give you that chance’, just gives you such a reality check to make the most of every opportunity,” said Clarke.

“All year this season, I’ve come out in every race swinging.

“I still can’t believe I got it on the line there. Taco was well ahead of me with less than 50 metres to go. I was cramping in both legs and I just lined up the biggest throw I could possibly do and I just prayed it was enough.

“I need to watch the replay, I still don’t quite believe it!

Elsewhere, it was just misery for the Australians, with O’Connor now 67th overall, 4:34 behind van Aert, who’s leading by 13 seconds from American Neilson Powless, 14 seconds from Boasson Hagen and 19 from Pogacar, who already looks well set to achieve his hat-trick.