The NRL has come down hard on Canberra coach Ricky Stuart for his “weak-gutted dog” rant, fining him $25,000 and suspending him from Sunday’s Round 22 clash with the Dragons and all training activities until next Wednesday.

Stuart is now the first coach in premiership history to be suspended over a post-match press conference tirade.

Many coaches have been fined five-figure amounts over the past few decades for unacceptable comments when fronting the media, including Stuart, who has repeated offences on his record.

NRL CEO Andrew Abdo said Stuart cannot provide instruction or direction to the team, players or club officials during the period of suspension.

“Leaders need to set the standard in the game,” Abdo said.

“These are significant steps we have taken. We have taken them because it is completely unacceptable for any person in the game to use language like the language Ricky used on Saturday.

“It is unacceptable regardless of the context or circumstances, or any matters that might have occurred of a private nature or any context.

“It’s inappropriate and unacceptable for someone to speak like that. And it’s a breach of the NRL rules.”

Stuart will not be able to communicate from a remote location, as some coaches have done this year when stuck in COVID-19 isolation and he will not be able to attend training for seven days after taking the team through its paces earlier on Tuesday.

Assistant coaches Brett White and Andrew McFadden will guide the team into the stoush with St George Illawarra. 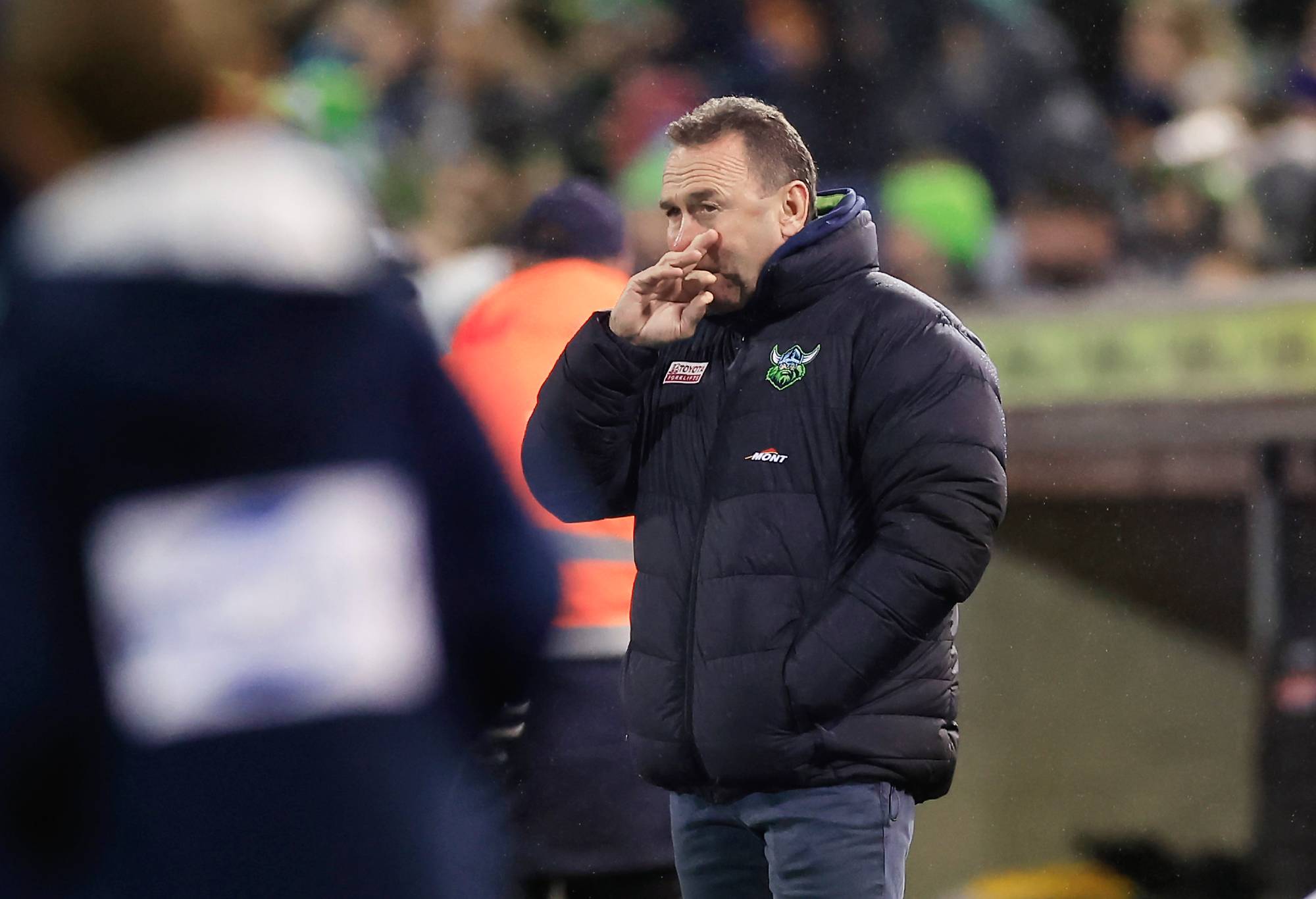 Raiders coach Ricky Stuart looks on during the round 21 NRL match against Penrith. (Photo by Mark Evans/Getty Images)

Following his extraordinary spray on Saturday night when he attacked Panthers five-eighth Jaeman Salmon’s reputation, the NRL Integrity Unit launched an investigation into the incident.

Canberra released a statement on Tuesday to reiterate they “recognise and accept the sanction handed down by the NRL today”.

Raiders CEO Don Furner had previously said the club does “not condone the comments made by Ricky in Saturday night’s press conference”.

On Tuesday he told reporters: “It’s a very public job and it’s a hard job. He’s obviously very disappointed and he’s embarrassed and he’s just going to have to put it behind him and move on and we’ll all support him.”

After Salmon had lashed out with his boot towards Raiders hooker Tom Starling during Penrith’s 26-6 win on Saturday night, Stuart fumed: “I know that kid well. He was a weak-gutted dog as a kid and he hasn’t changed now. He’s a weak-gutted dog person now.”

He tried to douse the flames on Sunday by issuing an apology: “I regret saying what I did on that platform after the game. I was speaking as a father and not as a football coach.

“My reaction was to a family situation that I thought I had dealt with, clearly I haven’t. I allowed my emotions to get the better of me and for that I am very sorry. There is a history between Jaeman Salmon and my family that I will not go into. I should not have brought it up after the game, but it just got the better of me.

“I am truly sorry that I have caused my family and the game unwarranted attention.”

Despite the coach’s carefully worded apology, the Salmon family issued a statement of their own, calling on the NRL to take action.

Cleary says Salmon will bounce back from drama

Penrith supported the sanctions while stating they were still “disappointed by the original comments made by Stuart on Saturday night, and believes that there is no place in the game for such comments”.

Coach Ivan Cleary said Salmon had been affected by the comments in the aftermath of the game but had been in better spirits at training on Tuesday.

“He was a bit rattled on the night,” Cleary said on Wednesday. “He was also a bit concerned about his family. They were quite upset, so I guess when that happens, it brings it to another level.

“But this week he’s seemed OK … He’s shown he’s pretty strong-minded. He’s a really popular member of the team on and off the field. We love him.”

Stuart is just the second NRL coach after Shane Flanagan to cop a ban, with Flanagan’s relating to Cronulla’s ASADA scandal.

Flanagan was later found to have breached the terms of his one-year ban by contacting the club in that time and so was deregistered again in 2018.

Their loss to Penrith means ninth-placed Canberra are two points adrift of eighth spot but they have a favourable draw in the final four rounds, playing teams below them on the table while many of the sides directly above them will face each other.

Geyer blasts Kent: ‘How dare you bring my family into it’

Geyer raged into his microphone “I am livid” about Kent’s column in The Daily Telegraph which claimed Stuart attacked Panthers five-eighth Jaeman Salmon and didn’t deserve to be banned because he was defending his family.

Kent referenced Geyer’s comments on radio on Monday when he said of Stuart “if that was his son, how would he feel if someone said that about his son?”

And then Kent responded with: And this is also the same Geyer who was involved in suing a social influencer for mistakenly identifying his daughter as the victim in a sex video. Given that, it might be fair to assume he knows how emotions roll when family is involved. Still …”

“Paul, I do. I do know how they’re involved because this wrecked my family for three of four years. You cannot compare one second you f…., to what’s going on with this Ricky Stuart saga,” he said.

“You cannot for one second know what we’ve gone through. Don’t compare the stories. Ricky Stuart’s had 12 years, 12 years to get this off his chest and he picks the night when Penrith kick his arse to come out with it and call someone a weak-gutted dog.

Whitehead: Players have Ricky’s back

Canberra will rally around Stuart and get on with keeping their NRL season alive, captain Elliott Whitehead says.

The Raiders skipper, who was sitting alongside Stuart when he called Penrith half Jaeman Salmon a “weak-gutted dog” in Saturday’s post-match press conference, said the controversy wouldn’t distract the team at a critical stage of their season.

Overshadowed by the storm over Stuart’s comments has been the fact the Raiders’ season is teetering on the brink, one game and considerable point differential back from the eighth-ranked Sydney Roosters with four games to play following their loss to the Panthers.

In a week dominated by unwanted headlines about their coach, Whitehead said his players stood by him.

“We’ve got his back, he had his reasons,” Whitehead told reporters on Tuesday.

“I’m not going to go into them but we’re all supportive of Ricky and he knows he probably shouldn’t have said it on that platform.

“He’s upset he let his emotions get the better of him.

“Whoever comes in [to coach], nothing changes … we’ve got a gameplan that we’ve got to stick to, we’ve used that for the last couple of weeks so nothing will change in that department either.

“As a club we’re moving forward and not trying to worry about last week, we’ve got a job to do this week and that’s to win a game of footy.

“We are disappointed we lost last week but we’re trying to bounce back from that because we have to.”