One of my real pet hates about modern footy is how much time is spent talking about effort.

That seemed to be the crux of much of the commentary, too, during Essendon’s stunning 35-point win over St Kilda. The Bombers’ tackling pressure, gut-running and daring play were all praised, while the Saints’ apparent lethargy was repeatedly put on blast.

“Still not convinced that they are fully invested in the hard work that is required for a team to compete at the top level of football,” Brian Taylor bemoaned midway through the second term, with the Saints 22 points in arrears.

The main reason I hate this kind of ‘analysis’ is that it implies that any team can win any match if they simply want it more; that any form slump can be overturned with a little bit of elbow grease; that with pluck, spirit and bone-crunching tackles West Coast might just beat Geelong on Saturday. And it offers nothing as to how anything happens at all.

Essendon didn’t win this game because they tried harder – in the words of Nick Riewoldt, the Bombers played with ‘effort without system’ against Carlton the week before, and it didn’t help then. This was a game won in the coaches’ box as much as from the 22 on the field.

So impressive was Ben Rutten’s night at the office, so clear his influence in setting up the game in the first half, that it was kind of damning of his and his club’s terrible first half of the season. If they can play like this, why haven’t they been this whole time?

Put simply, the Bombers found a system, and the whole game flowed from there. It started from half-back – where they’ve been the Dull Dons for most of this year, comfortably chipping it around, gaining minimal ground, and then finally turning it over with disastrous results, here they immediately looked to run and carry, take on the man on the mark and whisk the ball out of defensive 50 with lightning speed.

It was as if Rutten woke up mid-week in a cold sweat, having realised that he has perhaps the quickest bloke in the AFL jogging around in the backline kicking from side to side. Duly freed up, Nick Hind had his best game of the year: encouraged to go at full tilt, none of his former teammates were ever going to be a chance to go toe-to-toe with him.

It’s not an effort thing; everyone knows Nick Hind is fast. This is a player being emboldened to play to his own strengths, rather than as directed by a game plan. With five score involvements at quarter time, it’s clear it worked spectacularly.

Andrew McGrath marshalled the defence in a manner that was, dare I say, Luke Hodge-esque – it’s amazing how much safer the Dons’ back 50 looked with him back there, having missed their loss to the Blues. A calm mark against Jack Higgins in a tricky one-on-one near the goalsquare was a testament to both his physical strength and his cool head under pressure.

Mason Redman and Dyson Heppell were just as solid; it was noticeable how many numbers the Bombers had behind the ball, and how little space the Saints had to kick to when they had the ball. Redman in particular regularly started ono a wing before drifting back to remain loose behind the ball, enabling the Dons to deny the Saints any meaningful options in front of the ball.

While not as prolific, debutant Massimo D’Ambrosio instantly looked like he belonged, too, with precise ball movement and a stable presence more than enough to hold his spot moving forward.

Now this was a system to match the effort. 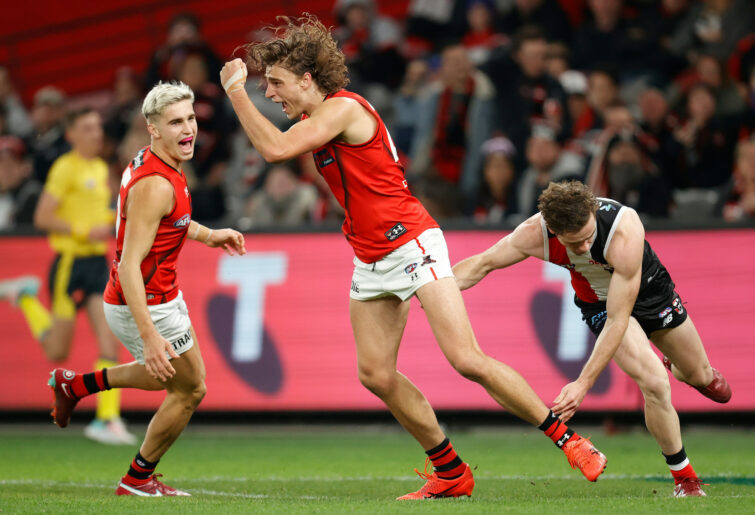 Matt Guelfi and Harrison Jones of the Bombers celebrate a goal. (Photo by Michael Willson/AFL Photos via Getty Images)

It helped Hind, too, to have a trustworthy defensive structure behind him, and allowed the Bombers to risk a turnover with aggressive play knowing there was a safety net behind him. But wouldn’t you know it, fortune favoured the brave: with a disposal efficiency of 81.9 per cent at half time, the Saints barely got a look at getting the ball back.

You can, to be sure, attribute some things to effort: the Bombers worked tirelessly in harassing the Saints with ball in hand, in particular leading to their first goal when Jade Gresham, bereft of options, uncharacteristically panicked to kick the ball cross-goal dangerously close to Peter Wright. He couldn’t mark, but the resulting spillage saw Harrison Jones snap truly.

The Bombers, too, were manic at denying the Saints the same freedom to run from half-back that Hind was getting. Jack Sinclair and Bradley Hill have been tremendous all year in this regard – Hill only latterly, having spent plenty of time earlier in the season off half-forward – but the Bombers closed the corridor off spectacularly, denying them any run and dash and forcing them to either take risks or traverse the boundary.

Matt Guelfi, too, was consistently hanging off one or the other, preventing the sort of overlap handball that has been the Saints’ modus operandi for much of the year. It cost the Bomber a goal, probably unjustly, in the third term, when Sinclair zigged one way around Jack Billings from a mark, Guelfi zagged the other, and the umpire deemed him to have encroached into the protected area.

They still racked up plenty of the ball – much of it in the final minutes of the second term as the Saints resorted to keepings-off to try and limit the damage – but where Hind gained 323 metres to the half, Sinclair managed 217 and Hill under 200. A key Saints strike weapon had been nullified.

The pressure, to be sure, was key: the Bombers won just about as many holding the ball free kicks as they had in the previous three weeks combined by half time. But it wasn’t as if they were tackling much more than usual – they’d finish with 51, slightly up from their season average of 48 (the worst in the league, by the way) – but rather that the efficiency of their tackles went through the roof.

When they latched onto a Saint, it was like being hugged by your largest aunt at Christmas – there was no letting go until the desired outcome had been achieved.

It’s easy to say the Saints just didn’t show up, but it’s also wrong. Keeping them in the game early was a dominance out of the centre, which saw them appear to weather an early storm with two quick goals in the first term to take the lead. Tremendous in the clinches was Brad Crouch, who has stepped up since the absence of Jack Steele to take charge of the midfield brigade. He had three clearances by quarter time, as the Saints bossed the coalface with 11 of them to just five.

Slowly but surely, though, the Bombers clawed it back, virtually level in the clearance and contested possession counts by half time. This is where we need to talk about Dylan Shiel.

It has been incredible what the hobbling and now absence of Darcy Parish has done to Shiel’s on-ball influence. I’m still not convinced that both can play in the same side – which is weird, considering Shiel at his best is a very different beast to Parish – but with the extra responsibility on his shoulders, Shiel shone both inside and outside.

Brilliant in tight with a swathe of clearances – he had a team-high seven for the match – but just as damaging on the spread with five bounces and a game-high 338 metres gained by half time, this was even better than his one-man show against the Blues. This is the player he was at GWS; this is the triple-threat midfielder the Bombers hoped they were getting at the start of 2019.

So brilliant was their first half that they could afford a lull – like, for instance, taking zero marks in the first ten minutes of the third quarter as the Saints banged on five goals to tie the scores.

With the scent of victory fading away in their nostrils, they upped the intensity to 11. The Saints’ pressure rating – which I still don’t fully understand by the way, Fox Footy – rose to 235 in the first half of the quarter: the Bombers, in the next ten minutes, got up to 274 at stoppages.

The goals flowed from there, just as they had in the first half – Jake Stringer sparked the run with a monster goal from outside 50 as one of two for the term, Peter Wright and Sam Draper marked powerfully, and the Bombers blew the game to smithereens.

By three quarter time, the margin was 37, the contested possession count 105-89 their way, and the Saints on the canvas. When was the last time a team kicked the first five goals of a quarter and ended it further behind?

It has been Peter Wright or bust at times for the Bombers in attack this year, but it’s funny how many options start to show up with quick ball movement and plenty of chances. Where the Saints continued to target Max King with predictable frequency, the Dons mixed it up: Wright, Stringer and Jones all aimed for at least four times on the night.

Jones bobbed up with another goal, Wright himself benefitted from yet another turnover of a Saints kick inboard; Sam Draper first took a strong mark near goal and put it through himself, then hauled in a screamer in the dying seconds of the term to allow one last goal to Guelfi right on the siren.

The Saints continued to try, but were coming from too far back; forced to take risks aplenty, many came unstuck, as the Bombers held to their lead like that aforementioned aunt. Two late Peter Wright goals blew the margin out to the 35 points that they really deserved to lead by; and at long last, a chance for Dons fans to smile: for the first time all season, a siren-to-siren performance from the red and black.

It’s a crucial loss for St Kilda – but not a fatal one. Steele should be back next week against Sydney, in what looms as an eight-point game between two sides almost unsplittable in sixth and seventh on the ladder. But now only percentage is keeping them inside the eight – lose next week, and it’s entirely conceivable they’ll finish Round 15 outside the eight.

For the Bombers, it’s a sign that, underneath all the scorn and despair of their start to the year, there lies a good, promising footy side. It won’t amount to anything in 2022, of course: but if you’re a Dons fan, you’ll have left Marvel Stadium with hope for blue skies ahead.

More of that, please.

US authorizes 1st COVID-19 shots for kids under 5