The colossus that is The Bend Motorsport Park welcomed back Supercars in 2022 for another round of sprint racing at the impressive new permanent racetrack in Tailem Bend, South Australia.

More than half of the 2022 Supercars championship has been contested, with the narrative very much the same as many would expect. There was controversy around a wildcard though, as well as some silly season news with the championship ad nauseam.

Here are the key talking points from The Bend SuperSprint.

It was a shock to see a wildcard entry propel to the top of the timesheets of a qualifying session. It was a job well done by rookie Zak Best, who claimed a sensational maiden pole position at The Bend.

The three-phased qualifying session saw the 20-year-old hold on to a 0.02-second margin over reigning Supercars champion Shane van Gisbergen, with a lap time of 1:47.816. A minuscule gap of 0.19 seconds covered the top four drivers, which also featured Cameron Waters and Chaz Mostert.

With eyebrows already raised regarding the Tickford driver’s amazing feat, there was furore in the Supercars paddock over the compound of tyres used by the wildcard entries of not only Best, but Image Racing’s Jordan Boys.

A batch of Dunlop soft tyres, manufactured on a different date to the ones utilised by the rest of the full-time field, is believed to have caused the upset amongst the field.

Whilst everyone has been allocated the soft compound this weekend, the difference in batch has been seen as the offset in pace of the full-timers and Best in qualifying.

Supercars’ solution to this for Sunday was to give everyone mixed sets of the soft compound, to include a tyre from that batch that the wildcards brought with them. What this meant was a resumption of normal service in what has been a dull affair.

What is the point of teams running wildcards and junior programmes if when they make it to Supercars, they’ll flounder around in the nether and only two or three teams have genuine chances to win on any given weekend?

Win in the rain for SVG seals Holden manufacturer’s title

An 18th win for the Commodore in its final full season in the Supercars championship has sealed the iconic Australian marque a 17th manufacturer’s title – courtesy of another emphatic van Gisbergen victory in Race 23.

In difficult conditions, the Kiwi battled with the likes of Waters and De Pasquale to emerge for a fifth consecutive win with an 8.7-second lead at the chequered flag. The Monster Energy Mustang made a mistake at Turn 17 under pressure from van Gisbergen, yielding to the championship leader.

From there, van Gisbergen, Waters and Brodie Kostecki all pitted late in the race for their compulsory pit-stop – en route to the Race 23 podium. 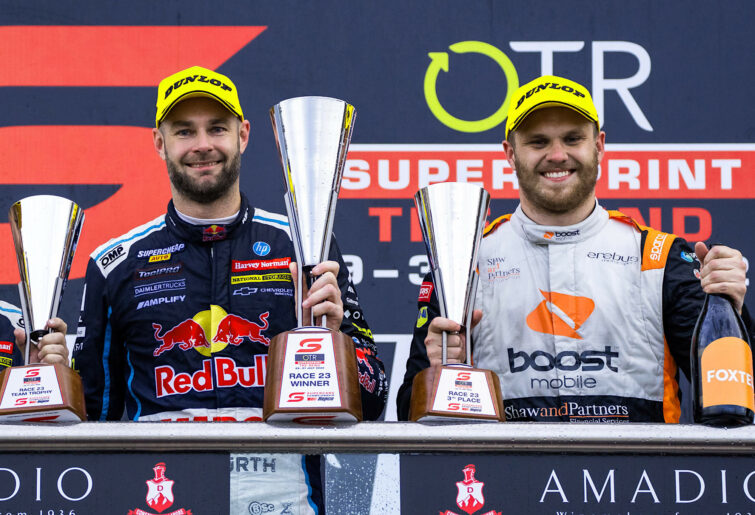 The peerless 33-year-old now possesses a mighty 393-point lead in the driver’s championship, which is more than a complete round’s worth of points. Little can be done now to stop van Gisbergen from claiming a third championship, following his 14 wins to date in 2022.

For Holden, though, it is the perfect parting gesture as the marque will emerge as GM in 2023 under the new Gen3 regulations, where the Camaro will replace the Commodore. Backing up from 2021’s dominant display from van Gisbergen too, where Holden also triumphed.

Up until Race 21 on Saturday, the last seven races at The Bend had been dominated by the mighty Mustang. This dated back to 2019 and the unstoppable performances of Scott McLaughlin, when he swept that edition of The Bend SuperSprint.

Championship leader van Gisbergen snapped that streak after the opening stanza of the weekend that was Race 21, cruising home to a 12th win of what is becoming a peerless 2022 campaign.

The Red Bull Commodore of van Gisbergen took the lead of the race on Lap 11, passing maiden polesitter Best with both drivers jumping away from the field at the start.

Van Gisbergen opted for a long first stint, racing through to Lap 20 before making his compulsory pit-stop and re-joining the race ahead of Will Davison. Mostert completed the podium, a place up from where he started.

Shell V-Power Racing utilised the undercut to great effect with Davison, who started the race sixth and jumped ahead of the likes of Waters and Mostert. Waters too made contact with Anton De Pasquale at Turns 1 and 2. 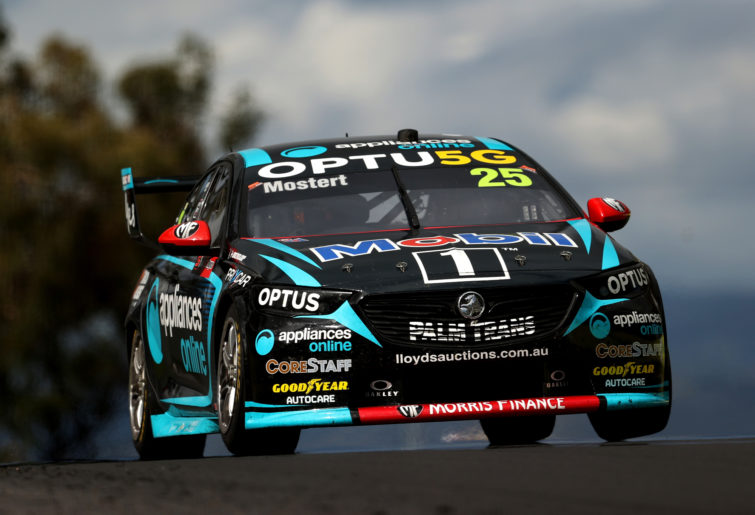 Sunday’s Race 22 opened with a major incident on the start line, with Thomas Randle stalling his Castrol Mustang and André Heimgartner slamming into the rear of the Tickford car.

A career-best qualifying result for rookie Randle on the front row of the grid turned sour as he stalled the Castrol Mustang off the line – with a clutch problem to blame. The surrounding cars quickly took evasive action, though happened to catch the blind spot of Heimgartner.

The Brad Jones Racing Commodore ripped off the front-left end of its chassis, leaving significant damage to the Tickford racer also in the rear. Both drivers thankfully were uninjured, as the race was red flagged and the track cleared.

Nick Percat was collateral damage also, as his Mobil 1 NTI Commodore got tagged by the flailing Randle Mustang before halting along the pit-wall. Percat’s car did stop at the Turn 1 runoff, signalling a premature end to his race too.

The damage for both Randle and Heimgartner ended their weekends early, which for the Tickford crew was a massive shame given their impressive qualifying performances. While the Walkinshaw crew miraculously got Percat’s car ready in time for Race 23, where the South Australian recovered to finish ninth.

Upon restarting the race, Mostert made the start of the season and leapt into the lead. Van Gisbergen went deep into the race again before pitting, which saw him overcut the Mobil 1 Optus Commodore and James Courtney for another win at The Bend.

Apart from the PremiAir Racing changes, the Supercars silly season has remained fairly quiet and news of Erebus Motorsport retaining its current line-up for the next two seasons means further stability on the grid.

The exciting young duo of Brodie Kostecki and Will Brown will remain at Betty Klimenko’s squad until the end of 2024, which puts an end to any speculation over whether the latter would be jumping ship to the Shell V-Power Racing team to replace Davison.

With news of Brown being off the market for now, Davison should likely reach a fresh deal with Dick Johnson Racing to stay alongside the prodigious Anton De Pasquale.

Brown became a race winner for Erebus during the Sydney Motorsport Park quartet of events in late 2021, while Kostecki has had four podiums to his name as well as some solid qualifying performances. The pair sit 15th and ninth in the standings respectively.

Erebus will enter the Gen3 era in 2023 with the Camaro, and hope of being elevated to the position of second-best in the General Motors ranks – as long-time GM faithfuls in Walkinshaw Andretti United defect to Ford.

It’s all a matter of style: The NRL’s best (or worst) haircuts