At a certain point in life, you begin to reflect on the choices you’ve made along the way. I’ve done alright in the overall scheme of things – could be better, could be worse – but I have invested an awful lot of time, energy and hope in some hopeless football teams.

But, of course, these choices are not rational. They’re about formative influences, identity, aesthetics, proximity and that insidious sense that anything is possible in sport. It keeps us coming back for more, I suppose.

It’s how you end up at Perry Park late on a Tuesday night watching a third division football team, and how you end up spending a chunk of your Saturday evening live blogging a rugby league team with no prospects.

‘Next season will different, anything is possible’. Oh, you poor fool!

At least I’m asking questions, and with the Dragons’ 2022 season now over it’s time to ask what it meant, what it might portend and whether it was worth the investment? To answer those questions and more, here’s the St. George Illawarra 2022 season review.

On the surface, you could conclude that the Dragons have made progress this season. They’ve improved from a win-loss record of 8-16 in 2021 to 12-12 in 2022. Breaking even with a minus-100 points differential would’ve seen the Dragons finish seventh last season.

The team’s defence improved slightly, from conceding 25.6 points per game in 2021 to 23.7 in 2022, while the attacking performance this year was virtually identical to 2021.

The apparent defensive improvement is actually pretty consistent with the overall decline in point-scoring across the NRL after a crazy 2021, while the attacking outcome – an improvement in relative terms – is mostly attributable to a slightly softer draw in the second half of season 2022.

The Dragons are essentially the same team they were 12 months ago, just a little luckier and with fewer disastrous barbecues. And this is what Rugby League Eye Test found when running the numbers on the 2022 Dragons in relation to their rivals. They’re still a bad attacking team and a bad defensive team, and they’re still about the 11th best team in the NRL.

Moving from cold, hard numbers into the realm of feelings, I’m inclined to ask: are the Dragons a happier team in 2022?

I ask this because multiple commentators have recently remarked that the Dragons seem to be an unhappy and possibly divided bunch. Of course, it’s impossible for me to know what the vibe was at team barbecues this season, but there is some evidence to suggest that all is not well.

Possible divisions within the squad were highlighted when the future of coach Anthony Griffin was questioned back in July, with Chairman Craig Young reportedly furious at an anonymous player leaking details about unrest within the playing squad to media.

If there is a divide within the squad, it seems likely that it’s between older players loyal to Griffin and youngsters unhappy with the Dragons’ dismal style of play and the marginalisation of some of the club’s best young prospects.

I mean, certain members of the team weren’t exactly discreet about it.

Speaking of those young prospects, the progress of Talatau Amone, Tyrell Sloan and Jayden Sullivan was a primary point of interest for Dragons’ supporters this season.

Amone’s progress has been very encouraging, with the young pivot taking on more responsibility as the season’s progressed and forming a good combination with the excellent Ben Hunt.

Sullivan’s mostly been limited to cameos at dummy-half and has done a decent job. I hope he’s given the opportunity to grow into a halves role next season, and that rumours of his possible departure do not come to pass.

Sloan’s progress has stalled, with opportunities to play fullback limited by the improvement of Cody Ramsey, and the opportunities Sloan was afforded early in the season not capitalised upon.

Ramsey himself deserves a mention. While he doesn’t have the attacking ceiling of the more talented Sloan, he’s done a solid job at fullback and offers more in defence than Sloan at this stage.

The Dragons have some big decisions to make about their coach and captain in the coming months. Those decisions should be made with a view to where the Dragons want to be two-years from now. Which halfback is more likely to next lead the Dragons into a preliminary final: Hunt or Sullivan?

I’ll get to that, but let’s lighten the mood with a quick look at some of the best and weirdest of the Dragons in 2022.

Player of the season: Ben Hunt

Who else could it possibly be? Hunt has been awesome, and the Dragons would not have come close to breaking even without him.

I had a very odd and concerning moment earlier this year while watching Hunt streak away to score the series-clinching try in State of Origin three. I was happy for him; he deserved the elation and glory of that moment in-front of the Maroons’ faithful at Lang Park. What’s wrong with me? 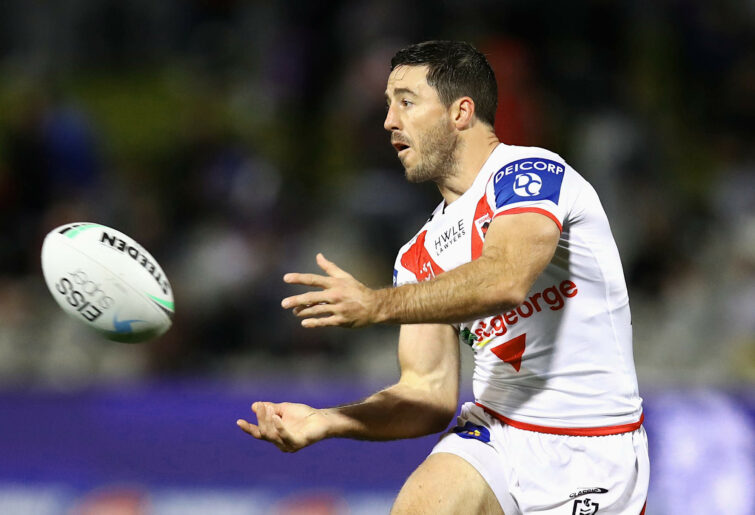 Well, plenty, but let’s not dwell on that. I’m prepared to say that Hunt is slightly better than the legendary Noel Goldthorpe. Yes, that’s a big call.

Hunt is at or near the top of most meaningful statistical categories among halfbacks in 2022. Nobody has more kick metres or line engagements. He not only leads 40-20s, he has twice as many as his nearest rival. He’s either scored or assisted 33 per cent of the Dragons’ tries in 2022.

Try of the season: Mat Feagai

The Dragons didn’t score many tries – only four teams scored fewer – and many seemed to happen by accident. For example, Mat Feagai’s tour de force against Brisbane in Round 25 was brilliant and reactive but mostly about the Broncos.

When it comes to the best try, I’m looking for malice aforethought; evidence of teamwork and preparation, and on that theme Ben Hunt’s link play with Talatau Amone in round 19 gets an honourable mention.

My favourite was Feagai’s beauty against the Titans in round 23. There was something going on between Jack Bird and Cody Ramsey in the build-up, and Ramsey’s pass to Feagai was superb.

I love a good photograph. My favourite rugby league photo involves Neil Fox, Brian Bevan and a touch judge wearing a jacket and collared shirt at Belle Vue in 1962.

The best of 2022 would have to be the snap of a horizontal Blake Lawrie against Wests in round 24. Lawrie’s actually facing his own goal in the photo, with Wests’ defenders behind him. What? How? 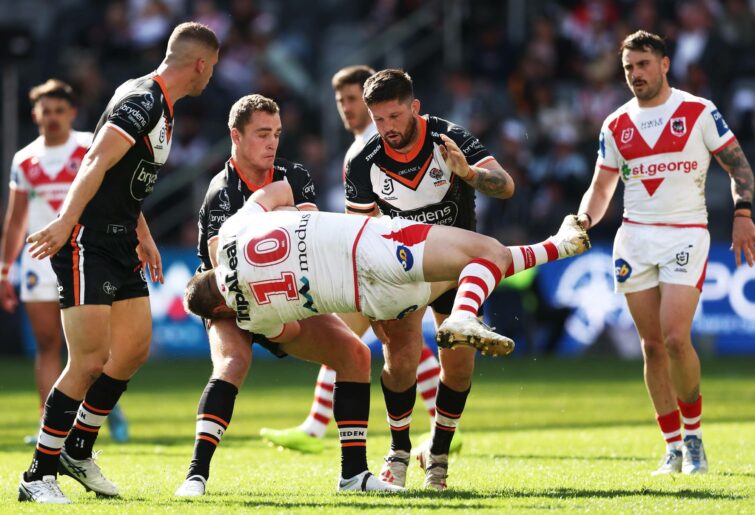 The end and the future

I’ll not mince words, Griffin needs to go, sooner rather than later. The Dragons’ board appointed him on a misplaced notion that he’d improve the team’s defence and discipline.

They can make up for that by recognising that ‘Hook’ does leave a legacy: teams tend to improve after he leaves, either because he instils something in them or because they’re delighted to see the back of him.

I know, it’s easy for me to say ‘sack the coach’ while bearing no responsibility for appointing a successor. But look, I’ll take some responsibility, there are alternatives: Michael Potter, Jason Ryles, Ben Hornby, Dean Young, even Steve McNamara if you want to think outside the box.

Do it now. Don’t wait another year to see if the status quo might work. It won’t – the Dragons have gone nowhere for two years now.

The future of Ben Hunt is more difficult. In recent days, reports have emerged that the Dragons have offered Hunt a two-year contract extension with a substantial salary reduction. Some have reacted to this by saying that the club is low-balling their best player. While I take every media report with a tonne of salt, I was still encouraged by the indication of the Dragons’ thinking.

Hunt will be 33 at the start of next season. If the Dragons were in a position to challenge for a premiership, by all means throw money at him for a couple more years, they’d be silly not to.

But they’re nowhere near that and Hunt’s almost certainly not going to be part of the next good Dragons team. If he wants to head home for a slightly bigger pay-day in his twilight, good luck to him. If he’s willing to stick around on reduced terms as a dummy-half and mentor for the young halves, great.

I’m a sentimental sort of guy – I still ramble on about Noel Goldthorpe as you’ll have noted – but a club like the Dragons cannot afford to cling-on to the best of their mediocre present at the expense of their potentially brighter future.

So, was 2022 worth the investment? Why yes, it was. I wouldn’t have anything to write and complain about without it. Bring on next season and all the inevitable frustration and disappointment it yields.

Half the competition bids us adieu

All to play for as Rugby Championships field bunches up again