The favourites to replace Zorko as Brisbane captain

Dayne Zorko’s captaincy of the Brisbane Lions has come under serious question after allegations surrounding his sledging of Harrison Petty in the clash against the Demons last Friday.

Some outside the club have called for Zorko to stand down as captain. Some reactive Brisbane fans echoed those sentiments.

As Mark Robinson wrote in the Herald Sun, “Zorko is a classic case of white line fever”. He plays on the edge, which has led him to butt heads with opposition players from time to time.

Some Lions fans and the commentariat have said that Zorko’s behaviour is unbecoming of a captain, and maybe they’re right, but the thing about footy, as in life, is you can’t have a person’s strengths without all their faults.

Zorko is a fierce competitor and a staunch defender of his teammates on and off the field. He’s a naturally high-energy and charismatic individual with a personality that can energise a group but also sometimes detract from the team focus.

Expansion clubs like Brisbane tend to need big and bold personalities like Zorko to cut through in a tough-going and sometimes apathetic market.

But at the same time there’s Zorko’s age – he’ll be 34 at the start of next season – which means that the question of leadership succession was always gonna come up at some point.

And this model has seemingly worked, with the likes of Boak and Walker rediscovering their form once relieved of their leadership roles.

It’s becoming increasingly rare for club stalwarts to retire as captain as Nathan Buckley and Michael Voss did in my childhood, although that may be on the cards for Scott Pendlebury and Joel Selwood – both in their mid-30s – who are still captaining their respective clubs. 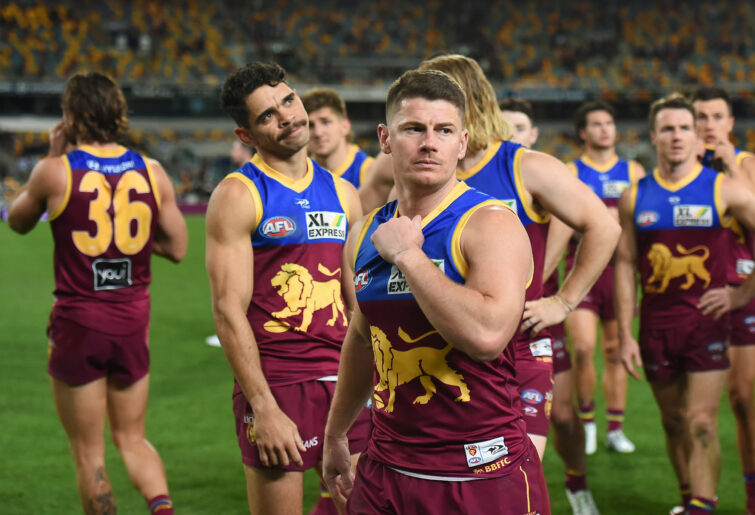 Although currently unsigned, there’s every chance Zorko will play on next season, and so he should. Zorko has a record five Merrett-Murray Medals and has been a bright spot at the club during a turbulent decade. Plus, the romantic in me would love to see Zorko retire a one-club player and, if he could be sent off with 250-odd games and a premiership medal around his neck, he would almost certainly go down as the greatest Lions legend since Jonathan Brown hung up the boots in 2014.

Under ordinary circumstances it might have made sense for Zorko to hand over the captaincy a year or two ago – he is, after all, still captaining his club at an older age than when many of those aforementioned players handed over the captaincy – but his form has not wavered since assuming the captaincy and last season he won his fifth Merrett-Murray Medal.

What also shouldn’t be discounted is the exceptional circumstances of both Zorko’s path to the AFL and his later elevation to the captaincy.

It’s been well documented that Zorko came to professional football late, having been overlooked in four consecutive national drafts before being picked up by Gold Coast at the end of 2011 and immediately traded to Brisbane.

Debuting in 2012 at 23 years of age, it’s fair to say that conventional rules of football mortality do not quite apply to Zorko. Where many footy veterans who have debuted much earlier begin to slow down by their late 20s, Zorko came into his best form at this time, winning consecutive best and fairest awards between ages 26 and 29. Plus, with his Boomer Harvey-like build, there is reason to believe in Zorko’s longevity.

It’s doubtful that the Lions recruiters thought they were recruiting a future captain – or multiple club champion, for that matter – when Zorko was gifted to them by the Suns. Although quick to establish himself as a consistent member of the 22 once on the Lions list, Zorko would have been at best a left-field captaincy option a few years ago.

In different circumstances it’s easy to see Zorko going down as a cult hero of the club of the ilk of Jason Akermanis or Richard Champion rather than as a club statesman.

But, after missing the finals for seven seasons in a row, it’s fair to say that very few positions at the Lions were safe when Chris Fagan arrived at the end of 2016. Dayne Zorko’s was one of those relatively secure positions.

After the attempted exit of then skipper Tom Rockliff in that off-season, the club was at a crossroads and the captaincy was thrown open. Zorko, along with the incumbent Rockliff, was one of three viable candidates for the captaincy in the Fagan era and the club, perhaps rightly at the time, overlooked him in favour of Dayne Beams, who as a Collingwood premiership player had greater experience. Yet when Beams stepped down in mid-2018 for personal reasons and with Rockliff having already departed in that off-season, Zorko was the last man standing.

And, to be fair, sometimes it’s easier to turn a ready-made champion into a leader – look at Trent Cotchin and Max Gawn – than it is to turn a natural leader into a champion. This is pertinent to an expansion team like Brisbane, where the club is dependent on marquee talent to fill promotional and ambassadorial roles off the field. If the average Queenslander circa 2018 could name any Lions player, it would have probably been Dayne Zorko, so why not have him as the face of the club?

And, to his credit, Zorko has stepped up, leading the team to four consecutive finals appearances. His on-field behaviour hasn’t been perfect, but that’s the same with most captains. Australian football is a highly physical game, and most captains are as guilty as any of getting into altercations and engaging in sledging. 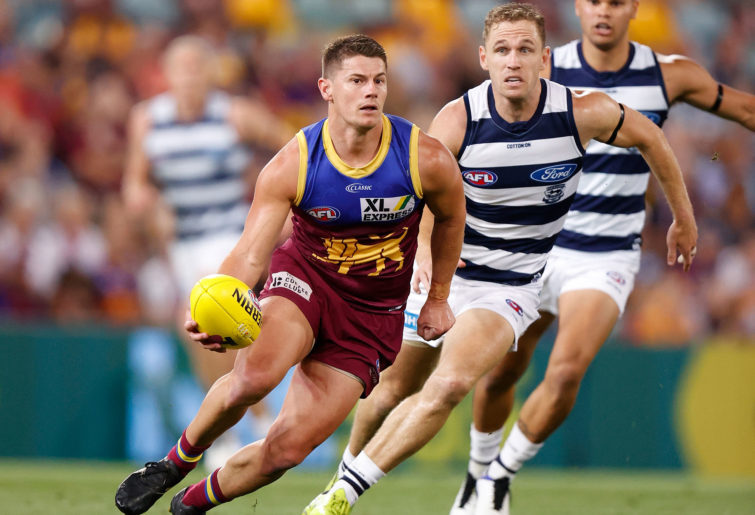 The captaincy is, after all, a multifaceted job with a lot of interest groups having competing priorities. Coaches want a captain who can implement their game plan, teammates want a leader who will rally them out on the field and the club’s media team probably want a captain who stays on script and doesn’t generate any negative publicity for the club.

Zorko has managed these demands as best he can, and it’s fair to say that no-one else at the club from 2018 to now could have been as effective as him at energising a group during a period of intense change.

But time waits for no man, even if he’s had some mix-ups along the way.

His logical successor would be the incumbent vice-captain, Harris Andrews. I like Andrews, having attended the same primary school as him, though he’s no stranger to playing on the edge both physically and in terms of sledging his opponents on the field some of the time.

Probably the second player most likely to be the Lions’ next captain is Lachie Neale. Neale, having recently signed a monster contract extension that should make him a Lion for life, could be rewarded for his loyalty with the captaincy, similarly to what happened with Rory Sloane and Stephen Coniglio when they each re-signed at the Crows and the Giants.

Neale’s a top bloke and a solid citizen, so you couldn’t fault the Lions for going down that path. However, he’s come to the Lions as a mature-age superstar with a wife and now a young family, so his connection to the club may not run as deep as that of a player who was drafted there and got to know the players on the margins through time spent in the reserves.

Neale, unlike Andrews, is also not a Queenslander. It’s by no means a disqualification, but it means that he doesn’t have the automatic connection with grassroots Queensland footy or necessarily the passion for growing the game up here. As said earlier, there is an inevitable ambassadorial role associated with captaining the Lions.

If not Neale, the next options would be Jarrod Berry and Hugh McCluggage, who as first-round draft picks in 2016 – when Fagan arrived at the club – have been poster boys for the Brisbane rebuild.

I’m of the view that a player should come to the captaincy when they’ve realised their peak form – whatever that may be. For some like Collingwood’s Nick Maxwell, that may be being a good role-player for the team, while for others like Nat Fyfe, that was when he consolidated himself as one of the competition’s greats with the 2015 Brownlow Medal. Respectfully, McCluggage isn’t there.

He’s ticked just about every box since debuting in Round 3, 2017, with a rising star nomination, back-to-back Alastair Lynch trophies and a Nigel Lappin trophy, but he still has another level to go to establish himself with Lachie Neale, Patrick Cripps and Christian Petracca as one of the competition’s most damaging players.

That’s also not to say that the other leadership options are perfect; it’s more about creating an environment where your high-powered sports car (McCluggage) can race without being encumbered with mundane activities. I also think McCluggage’s softly-spoken and laid-back demeanour would put him at a disadvantage as captain.

Berry, conversely, seems a more natural fit as captain. He was elected to the leadership group in just his third year at the club and was quick to commit to the side with a long-term contract. He can get physical on the field, but off-field, he’s a great advocate for raising awareness against breast cancer.

Injuries and from inconsistency have hindered Berry’s development as a player, and he was notably absent from the leadership group this year, but after playing 19 of 22 games this season, there’s every reason that he can put his injury woes behind him and come back into the leadership group next season.

The only other name I’d throw in there is Jarryd Lyons. Having had a career resurgence since being delisted from the Suns in 2018 and established himself alongside Neale as one of the leaders in the Lions midfield, Lyons is absent from the leadership group this season and is now experiencing somewhat of a form slump. At 30 and contracted until 2024, Lyons may not be part of the club’s long-term plans – although he’s only a year older than Neale – and the fact that he’s been at the club for less time than some of his rivals may rule him out of consideration.

If Zorko did hand the captaincy over at the beginning of next season, perhaps his greatest legacy would be that he’s fostered an environment where multiple prospective leaders have been able to grow.

Apple confirms iPadOS delay, 16.1 will be the first release this fall

The AFL refuses to protect the head. Some clubs appear to care little about what’s in it