The NRL thinks you are all idiots

On the 8th April, 1990, the Brisbane Broncos and Manly-Warringah Sea Eagles played out a tough, close game at Lang Park.

The Broncos were trailing 12-6 with less than ten minutes remaining when Kerrod Walters, backing up a Peter Jackson break, surged for the line, reached out, and bounced the ball.

Now, to be clear, this was not a ‘hmm, did he get that down, better check the replay’ ball bouncing. This was the Platonic ideal of knock-ons. This was a bounce that joined the Great Wall of China as man-made phenomena visible from space.

Rafael Nadal is closer to scoring a try before each serve than the Brisbane hooker was at that moment.

In real time, at real speed, there was zero doubt: a try had been bombed. Broncos heads fell: they knew it might be their last shot at equalising.

But wait! Not everyone knew it after all. There was one man who, for reasons science cannot explain, did not realise Walters had bounced the ball like Michael Jordan. And as Dame Fortune dictated, that man was the one with the whistle.

He gave the try. Brisbane ended up winning the game 14-12. Manly fans were outraged, but to his credit, the referee publicly apologised to the Sea Eagles after the game.

The referee was Graham Annesley.

I wonder if he thought back to that howler of howlers on Monday, when he stood before the rugby league media and public, and claimed that although, sure, the decision to award a match-winning penalty for an escort to the Cowboys after full-time of Sunday’s game against the Tigers was maybe kinda sorta not a hundred per cent correct, the decision to allow North Queensland to make a captain’s challenge to gain that penalty in the first place was absolutely kosher. 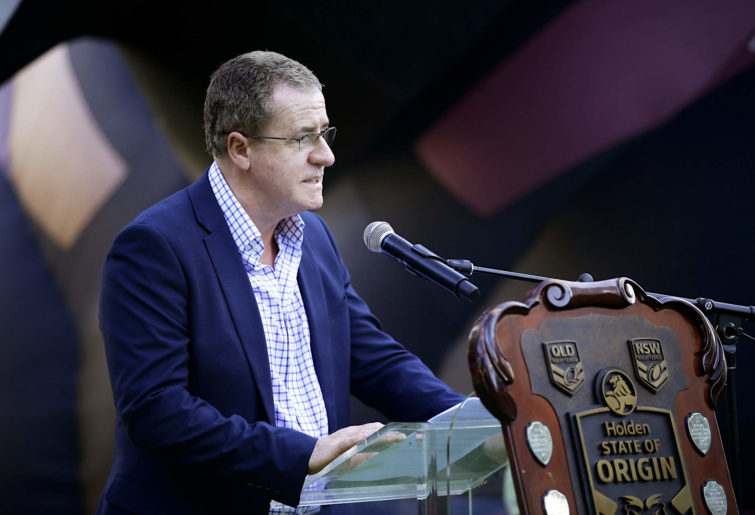 I wonder if, as he spoke the words, “You won’t find anywhere in black and white a specific rule that talks about whether you can make a challenge after time has expired on the last tackle of the game,” he thought back to the time when he had made a mistake and had the integrity and courage to own it and apologise, and breathed a sigh of relief that the days of integrity and courage in NRL officialdom are far behind us.

For those words from Annesley merit a response, if we are being as polite as humanly possible, involving the pulling of appendages on which are affixed bells.

We won’t find the specific rule about whether we can make a challenge after time has expired?

Annesley’s defence is like responding to an accusation that you’ve driven your car through the front of someone’s house by pointing out that it’s not against the law to park in a driveway.

Not that Annesley’s was the most infuriating statement emanating from the NRL on the matter. The previous evening an NRL spokesman had said: “The captain can challenge decisions by the referee to stop the play. Although the referee had blown his whistle to stop the game after the last tackle was completed as time had expired, he had not yet called full-time.

“The whole concept of the captain’s challenge is to make sure any decision by the referee that stops the game can be reviewed. To not do so would effectively deny a team the right to have an officiating error corrected on the last play of a game just because time had expired.

“There are multiple examples of games continuing after time has expired following an infringement. These include incidences of foul play or other penalisable rule breaches.” 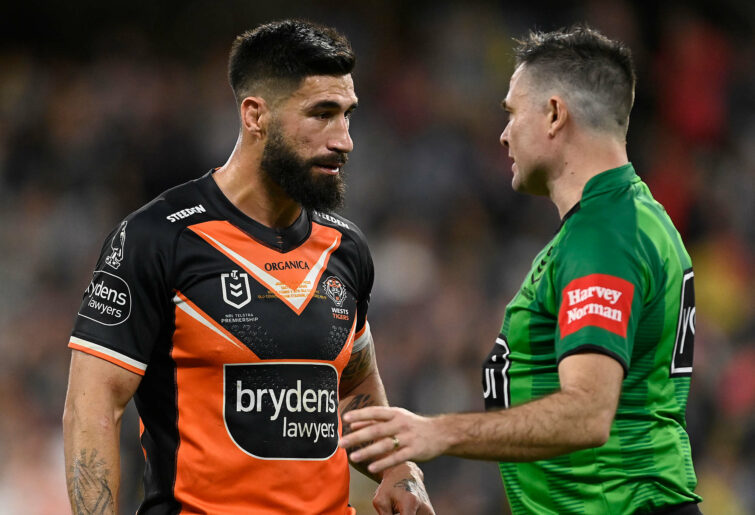 James Tamou of the Tigers speaks with the referee. (Photo by Ian Hitchcock/Getty Images)

Yeah. Read that again. Nice and slowly. Let it sink in. Think deeply about it.

I don’t know who that NRL spokesman was, but I’m betting he spent a lot of time trying to scrub himself clean on Sunday night.

The referee had blown his whistle to stop the game because it was full-time, but he hadn’t called full-time?

And that’s before we deal with the fact that, like Annesley, the spokesman was trying to weasel out of it by gaslighting us that the issue was whether games can continue after time has expired.

Just like Kerrod Walters’s bounce, everyone knows this. The difference is that while in 1990, the powers that be were willing to admit what everyone knew and say sorry, in 2022 the powers that be are absolutely, unreservedly, 100 per cent committed to displaying their utter contempt for the rugby league public at every opportunity.

Rugby league fans can, and do, put up with a lot of crap. From their clubs, from players, from coaches, from administrators – and hell yes, from the media as well.

They put up with incompetence, greed and dishonesty constantly, and it’s not so high a price to pay to enjoy a great game that we all love.

But this … this is something else. This is the people who run the game telling us to our faces: “You are idiots, and we will treat you like idiots, because we can.”

This is brutal, shameless contempt shown to the people who these same administrators will on other occasions lie that they exist to serve. This is spitting in the face of fans and telling them to be grateful for the free drink. It’s arrogance so naked that ‘arrogance’ hardly even seems an adequate word to describe it.

And moreover, it’s exactly what we should expect from the NRL, which has made an artform out of telling fans what they want, and sticking to it, no matter what.

This NRL does not admit fault, does not apologise, and does not allow for the slightest possibility that anyone outside its offices might have a point.

This NRL makes bad rules and when shown that they’re bad proposes more bad rules to cover the first bad rule up.

This NRL will literally suggest making the game longer rather than admit that its pet rule change doesn’t work as it’s supposed to.

So why should we expect anything different, when the NRL’s beloved Bunker – which screws up on a weekly basis in a whole variety of ways – ruins a game completely due to match officials who either don’t know the rules or don’t care?

Of course, none of the anger here or anywhere else will make the slightest bit of difference to anything. The officials responsible for Sunday’s balls-up should be given a nice long rest for at least the remainder of the season, but they won’t.

Serious conversations should be had about the role of the Bunker and the usefulness of the captain’s challenge, but they won’t.

Because the NRL has decreed that everything is fine, and if anyone says any different, why should they care?

They’re in control, not the dumb suckers who support the game. The morons who actually care about rugby league, as opposed to the geniuses in charge who control everything and don’t care one bit about any of it.

Rugby league fans put up with a lot. They’ll put up with this too, because they love the game much more than anyone at NRL HQ does.

But right now, every fan is entitled to look the game’s officials in the face and give them a heartfelt “F— you”.

The NRL robbed you and it is black and white