The search for community benefits to the Bills stadium deal 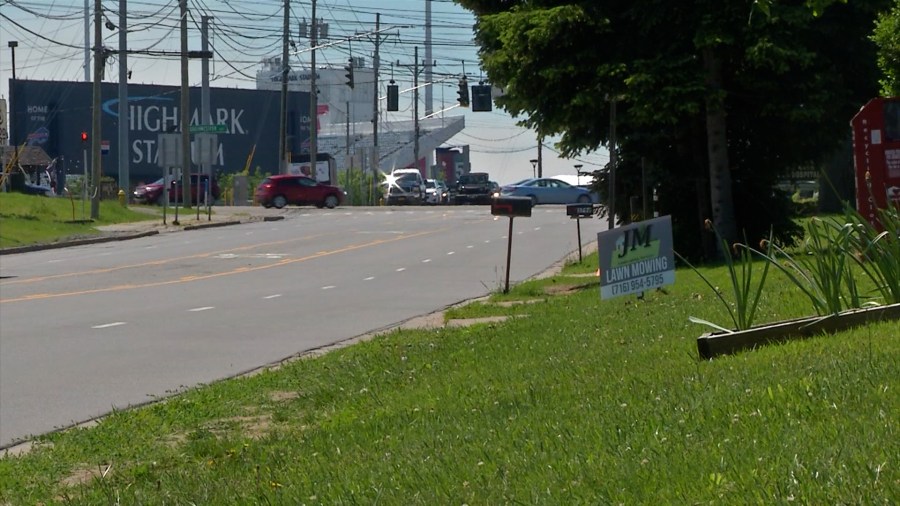 ORCHARD PARK, N.Y. (WIVB) – When the Buffalo Bills, New York State, and Erie County agreed to finance a $1.4 billion dollar stadium construction project in March, they also agreed to negotiate a community benefits deal. Those talks are expected to take place over the next few months. Community leaders are hoping they result in major investments across the region.

Because there was always an expectation that a large public subsidy would be going toward construction of a new stadium in Orchard Park, Erie County Legislature Chairwoman April Baskin insisted that a community benefits agreement be part of the stadium deal as early as last year.


He played for the Bills; now he’s designing their new stadium

As part of their non-binding March agreement, New York State is set to contribute $600 million to stadium construction, while Erie County would kick in $250 million. That doesn’t include recurring State costs for capital and maintenance expenses.

“How does everybody in Erie County still have a beautiful life and benefit from that investment?” asked Baskin. That’s the question at the center of CBA negotiations for government officials.

The binding deals must be completed by September. If they’re not, the Bills may be able to engage in relocation discussions.

“We’re excited for all of the things that the Buffalo Bills have currently done in terms of philanthropic investment here in Erie County,” Baskin said. “But now we’re playing a new game at a higher level.”

Baskin is part of the county’s team reviewing proposals related to the community benefits deal and making suggestions. While Erie County Executive Mark Poloncarz has shied away speaking about the CBA negotiations, Baskin told News 4 she would like to see investments in transportation – particularly in marginalized communities that might not have easy access to the Southtowns stadium – and youth sports.

“This is a huge investment into local sports,” Baskin said of the public money going toward the new stadium. “Most people in Buffalo are Bills fans. We love the Bills. But if we’re going to make an investment into professional athletics, we need to make the same investment into youth athletics.”

“In terms of initial seed money and fiscal investment, I do believe it should come – a substantial amount of it should come from the private entity that is benefiting from the public dollars,” the Legislature’s chairwoman added, referring to the Bills.

Legislator John Mills, who represents the Southtowns in the Erie County Legislature, is also on the county’s community benefits team.

“With the impact of the new stadium, there are some things that need to be done there,” Mills said. “For instance, sidewalks. We have some sidewalks right at the stadium. But Abbott Road going north to Milestrip Road in the Town of Orchard Park, no sidewalks.”

The $850 million in combined public funds set to go to the new stadium, which is expected to open for the 2026 season, broke an NFL record. It was previously held by Allegiant Stadium, which was built with $750 million in public money and opened for the Las Vegas Raiders in 2020.

“The Raiders have been very big supporters of the Community Benefits Plan.”

A community benefits deal was negotiated in connection with that stadium as well. Ken Evans, the President of the Urban Chamber of Commerce in Las Vegas, is the chairman of the committee in charge of overseeing compliance with it.

“The Raiders have been very big supporters of the Community Benefits Plan,” Evans said.

“The primary focus of the Community Benefits Plan to a certain extent is to make sure that segments of the population get a chance to participate in the benefits that come about – specifically I’m going to say the economic development benefits – that come about as a result of the stadium being built,” Evans said.

In keeping with Vegas’ community benefits deal, Allegiant Stadium hosted its second ‘Gridiron Pitch’ event in May. It included 60 local businesses, including small and diverse businesses, which had the opportunity to pitch their work to the stadium’s procurement team.

“That’s an example of not only meeting the intent of the Community Benefits Plan, but exceeding it,” Evans said.

When the inaugural Gridiron Pitch event was held in 2021, 31 potential vendors took part. Stadium officials did not say, however, how many of those businesses ended up being awarded contracts.

“Now it’s just time for us to get very specific.”

Public documents associated with the Bills stadium deal lay out some things the Western New York community benefits agreement will have. They include requirements that the Bills make the new stadium available for up to five civic events each year, give the county a suite for games and other events, and donate tickets for each home game.

Much like the deal in Vegas, Baskin hopes it includes creative ways to include women and minorities in stadium construction and operation.

“I think that the people that are at the table, the folks that we’re dealing with understand the importance of community investment,” she said. “Now it’s just time for us to get very specific in terms of the nuances that we want to see come out of a legal, binding document.”

How to edit and unsend messages on iPhone