‘The team to beat already’: Lethal Lions and dazzling debutants

Round one of the seventh AFLW season is in the books, and there were plenty of storylines to come out of the weekend’s matches.

After just one round the Brisbane Lions are the team to beat for this year’s flag already after thrashing Fremantle by 49 points, with the result also potentially slamming the Dockers’ premiership window shut.

There were also promising signs for the four clubs making their AFLW debuts, with Essendon impressing in its 26-point win over fellow newcomers Hawthorn, while Port Adelaide and the Sydney Swans both have some kinks to iron out in the weeks ahead.

Here’s all that you need to catch up on from round one.

The Brisbane Lions entered the new season hellbent on redemption after having its 2021 premiership defence ended in heartbreaking circumstances against Melbourne at the MCG back in April.

But if anything, Craig Starcevich’s side have proven this early in the new season that they will again be among the contenders for the season seven flag, with reigning best-and-fairest Emily Bates picking up where she left off with a dominant display against the Dockers.

In the first AFLW regular season match at the Gabba, scores were tied at quarter-time before the Lions ran riot with six unanswered goals, with the home side racking up nearly three times as many inside-50s as the Dockers did (45-17).

Bates gathered 19 disposals and laid seven tackles in a best-on-ground performance that will have the Lions’ opponents on notice in the coming weeks, not least the GWS Giants whom they face in Canberra next Sunday afternoon.

Having been gutted by expansion, the Dockers tried hard but wilted under the Lions’ pressure as they face the possibility that their premiership window might be about to shut this season.

Their best chance of claiming any silverware for the success-starved club were suddenly crushed at the height of the COVID-19 pandemic in 2020, a year in which they went undefeated in seven matches, including what turned out to be a meaningless quarter-final.

Trent Cooper’s side have tried hard to remain in flag contention but after going down to the Adelaide Crows in the preliminary final last season, and now starting the new season with a heavy loss at the Gabba, there might be some difficult times ahead for the purple haze.

Just ask the men’s team, who crashed from flag contenders in the first half of last decade to also-rans by the end of it before rising back up to contest finals for the first time since 2015, this year (a separate preview for week one of the AFL finals will come later this week).

It now remains to be seen if the Dockers can bounce back when they host the Geelong Cats off a six-day break, and another loss in such a short season could see them all but written off as flag contenders for season seven.

Promising signs for AFLW debutants, but it’s the Bombers that impress

Having initially held off on applying for an AFLW license in the competition’s early years, both Essendon and Hawthorn put on a show for young and old in the clash of the expansion sides at Marvel Stadium on Saturday night.

The match was originally fixtured to be played at ETU Stadium in Port Melbourne; however, a campaign led by Hawks coach Bec Goddard, as well as tickets quickly selling out, saw the match moved to Docklands in order to accommodate the expectation of a larger crowd.

It was never going to be a Bombers vs Hawks match without any argy-bargy, and it was therefore no surprise when the two sides traded blows at quarter-time, invoking memories of the infamous 2004 “Line in the Sand” match.

In the end, just over 12,000 fans packed the ground to watch the Bombers win by 26 points, with star signing Madison Prespakis booting a goal and gathering 26 disposals for her new club after crossing over from Carlton at the end of the previous season.

Premiership Lion Jessica Wuetschner etched her name into the history books as the first goalscorer in Essendon’s history, while Sophie Locke did likewise for the Hawks, who had led by a point in the third quarter but failed to score at all in the last.

Sarah Perkins, who played under Goddard at the Adelaide Crows when they won the inaugural premiership in 2017, became the first AFLW player to play for four different clubs, and she marked her debut match at each by booting a major.

Among the other debutants, all the excitement and hype that surrounded the Sydney Swans’ AFLW debut were brutally dashed as a more experienced St Kilda ran away with a 29-point win at North Sydney Oval.

A crowd of over 8,000 saw a tightly contested first quarter, in which new Saint Nicola Stevens booted the first goal 90 seconds in before ex-GWS Giant Rebecca Privitelli made history becoming the first Swan to kick a goal in an AFLW match.

But while the Saints dominated after quarter-time, there were plenty of good signs for the Swans as their eleven debutants, including Cynthia Hamilton and Montana Ham, adjusted themselves well into the game.

There were hearts in mouths when Ham limped off the field with a serious leg injury inside the final five minutes, however it has been confirmed that she has been cleared of the dreaded ACL injury which could’ve put her out of the game for twelve months.

Regardless, the top draft pick seems destined for some time on the sidelines, and it’s the last thing the Swans would want as they next face the difficult task of taking on another experienced opponent in Collingwood at Victoria Park next Sunday.

A goal to co-captain Lochland seconds out from half-time was another highlight for the red-and-white, who will have their moments this season but will likely finish near the bottom of the ladder as they look to adapt the performance standards set by other clubs.

The upside for Scott Gowans’ side is that they won’t have to face a side that’s ever played in an AFLW Grand Final in their inaugural season (for the record, only five clubs have ever done so – the Adelaide Crows, Brisbane Lions, Carlton, Melbourne and the Western Bulldogs).

For the Saints, who suffered a controversial post-siren loss to the GWS Giants in Blacktown in their previous visit to Sydney six months ago, Georgia Patrikios made a promising return with 18 disposals to be the leading possession getter on the ground.

Her comeback was only possible after the AFL reversed its COVID-19 vaccination mandate, the 21-year-old having elected to sit out the previous season rather than comply with vaccination requirements.

Earlier, Port Adelaide also gave a good account of themselves against the West Coast Eagles in Perth, but were left kicking themselves after throwing away an 11-point lead in the final quarter to go down to last season’s wooden spooners by just two goals.

Captain Erin Phillips endured a quiet debut for her new club, finishing with just 10 disposals, but it was another recruit in Gemma Houghton who provided a focal point up forward as the Power sought to become the first expansion AFLW side to win on debut since 2019.

But just as the women from Alberton looked set for a breakthrough, the Eagles, led by its captain Emma Swanson, showed their class in the final quarter with four unanswered majors to win in round one for the first time in history and claim just their fifth win overall.

With their first game out of the way, Port’s first game at their spiritual home in Alberton against the Western Bulldogs this coming Saturday will be highly anticipated as fans will get to see their side in the flesh for the first time.

Challenges ahead for Crows’ premiership defence

They have been the most dominant side throughout the short history of AFL Women’s but the Adelaide Crows could suddenly be facing new challenges as they attempt to win a second premiership this calendar year, and fourth overall.

The Crows were among several clubs gutted by expansion during the off-season, in which its three most decorated players – Erin Phillips, Justine Mules and Angela Foley – defected to cross-town rivals Port Adelaide.

Matthew Clarke’s side began their premiership defence at home with a Grand Final rematch against Melbourne, who arrived in the City of Churches not only hellbent on revenge, with this season potentially being Daisy Pearce’s final shot at a premiership farewell. 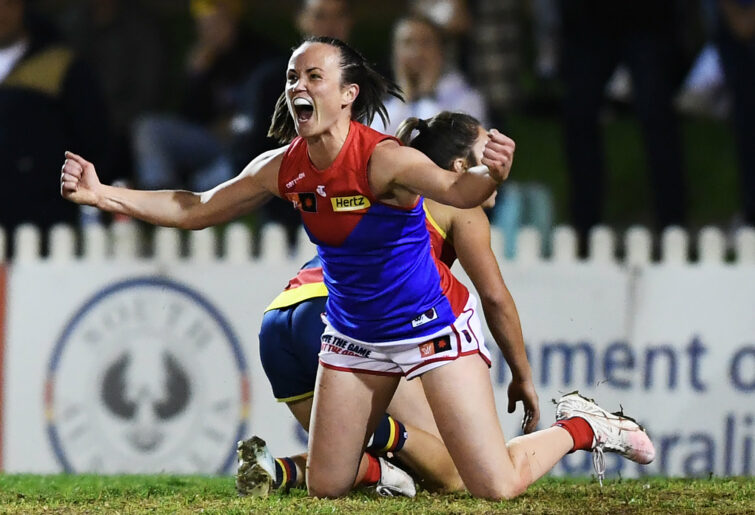 Daisy Pearce of the Demons celebrates a goal. (Photo by Mark Brake/Getty Images)

The reigning premiers started well, with Ashleigh Woodland booting the first major inside two minutes, but from that point on it was all the Dees who claimed an 18-point win, which was capped when Karen Paxman booted a goal from outside 50 in the final minute.

It’s not all doom and gloom for the Crows; remember, they did lose their first (and only) match of the 2019 season by just a solitary point against the Western Bulldogs to prevent what would’ve been the first perfect season in AFL Women’s history.

Again it was the Bulldogs that prevented the Crows from achieving a perfect season earlier this year, and again it was a one-point result on which the Crows were on the wrong end.

But despite losing several players since their premiership victory twenty weeks ago, many will again expect the women from West Lakes to feature at the business end of the season, but learning to play without Erin Phillips and co. will be something they’ll quickly get used to.

They’ll start favourites to hit back when they face Richmond at Punt Road Oval next Saturday morning, but it won’t come easy against a Tigers side which suffered a heartbreaking loss to the Geelong Cats in its first match at Kardinia Park on Sunday.

These are just some of the key talking points to come out of round one of AFL Women’s season seven, with all 18 teams now involved in what is an exciting and intriguing period for the league.

Looking ahead to Round 2

It will now be seen whether Essendon, the most impressive of the four AFLW debutants, can maintain the rage in coming weeks, with their blockbuster against Carlton set to be the highlight of round two in which Maddy Prespakis and Georgia Gee will come up against their former side.

St Kilda will be aiming to make it two from two to start the season when they face another expansion side in Hawthorn, whose captain Tilly Lucas-Rodd will be facing her old side for the first time.

Melbourne fans will be treated to a special double when their women’s side faces North Melbourne at the MCG, before their men’s side take on the Sydney Swans in the second men’s qualifying final at the same ground on Friday night.

The Power will play in front of their home fans for the first time, and will hope to mark the occasion with a win over the Western Bulldogs, who come in fresh off a seven-point win over the GWS Giants.

But after one round, it’s the Lions who have set the early pace; and with reigning best-and-fairest Emily Bates having already picked up where she’s left off from last season, they might as well be the team to catch for season seven’s flag.

As Ukraine celebrates their 31st year of independence, local efforts continue to help them keep it