If you’ve found yourself in the last 18 months beginning to forget how Richmond ruled the AFL world for four years, Thursday night at the MCG was an apt reminder.

Other teams may have gone past the Tigers in perfect footballing conditions, but this team is still unmatched in the wet. And with a biblical downpour hitting Melbourne and soaking the usually so clean and precise Carlton, it was tailor-made for the Tigers to issue a warning that they aren’t quite done as a major footy force just yet.

That they’re only hanging onto their spot in the eight by a skin of their teeth sums up the abundance of good sides fighting for those precious, precious finals berths – and no one is safe anymore with Collingwood the team on the outer. Not even the Blues.

Everyone knows the Richmond game, which places greater focus on pressure, determination and desperation rather than silky skills or explosive running, is ideally suited for a wet day at the office. But it’s more than that – the players themselves just know how to use the conditions to their advantage.

With Blues players fumbling and slipping repeatedly, with the ball sliding through fingers like the proverbial cake of soap, the Tigers chest-marked, eliminated any risk and focused on what they do best: surge the ball forward, create an outnumber at every contest, and profit.

Liam Baker has received plenty of plaudits this year, usually in the ‘most underrated player in the game’ category; but his cleanliness turns him from a heart and soul team player in normal conditions to undisputedly elite in the wet. If your life depended on a player gathering a ground ball at top pace on a slippery afternoon, I’d recommend Baker as your man, though not before questioning just how your life got to the point to be riding on something that oddly specific. 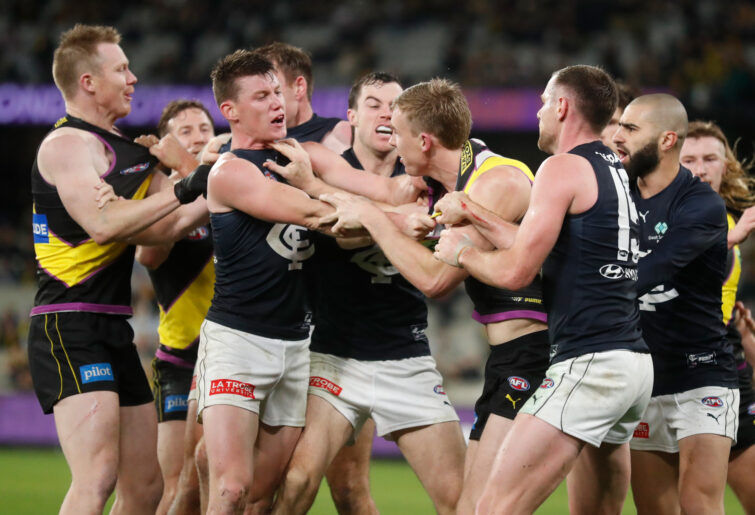 The Tigers’ game plan is always in defiance of the stats sheet; they don’t tackle more than anyone, generate more inside 50s than anyone, get more touches than anyone, even intercept more than anyone. But precisely none of it matters; like a dad at an Auskick game, sometimes the main thing is just showing up. And wherever the footy is on the ground, there Tigers galore be.

There are times, though, when the Tigers do dominate to the extent that even the stats bend their way. A 6-1 clearance differential against the Blues, the kings at the coalface this season, paved the way for the first three goals of their game.

That first term could hardly have been dreamed by Damien Hardwick: the Tigers were dominating at the source, creating outnumbers both in front of and behind the ball, and terrorising the Blues whenever they lost possession.

On a wet night, any Under-10s coach could tell you to chuck out any nuance and try slapping it on the boot; the Tigers followed the rulebook, with a 61-26 kick-handball split. The Blues, forced into panic by the suffocating Tigers around them and fearful of Nick Vlastuin’s presence as the spare behind the ball, went at 54-43. It was a death sentence on a night like this.

An underrated aspect of the Tigers’ game is their ability to get a last-ditch disposal away, regularly into a dangerous spot, too. Blues fans were left tearing their hair out as a series of line ball holding the balls went unpunished, but often, where even Patrick Cripps was unable to escape a suffocating Tiger tackle, the Blues left enough body free to get the ball legally loose.

Desperate to expose the Blues’ vulnerability behind the ball in the absence of Jacob Weitering, the Tigers’ ball movement became even more frenetic than normal. They played on from a whopping 58 per cent of their marks in the first term, more than double the AFL and their own average in 2022.

Adam Saad seemed the only Blue able to respond; his run and carry were a permanent threat to the Tigers, with the half-back keen to repel quickly and with bounces aplenty at every opportunity. His kicking, too, was incredible in the wet: you’ll struggle to find a better pass all year than the one that found Zac Fisher without breaking stride in the first term amid a latticework of Tigers.

Yet if there is a non-stat that sums up the Tigers as a team, especially in the wet, it’s this one: Richmond had not a single mark inside 50 in the first term, despite their haste in getting it in there. The Blues had three.

Yet, thanks to both Carlton’s inaccuracy and the Tigers’ ability to generate scores once the ball hit the deck – Shai Bolton’s soccer on the line a perfect example, despite some looming fingers from Sam Docherty that might have got a touch – the only three goals were in yellow and black.

That was never going to last, and Tom Lynch in particular began to threaten. His match-up with the slighter Lewis Young was clearly the one the Tigers wished to exploit.

Winning a free kick from a panicked Young hold, taking a strong contested mark in a one-on-one, and reading a ball coming out the back alone inside 50 far quicker than the Blue saw Lynch kick three goals from the direct match-up.

Young has had a tremendous season, but it’s clear his place is as a second, or even third, tall behind Weitering, where his intercept marking can be used to greatest effect.

While the Blues steadied, particularly in defence, as good teams should, it was becoming clearer and clearer that Charlie Curnow was having what I believe is technically known as ‘one of THOSE nights’.

Already dealing with the weather, the close attention of Dylan Grimes made for a rough night on all counts for the reborn spearhead. Much of his success in a superb 2022 has stemmed from his elite overhead marking, and the Blues know it: watch how they kick it higher towards him than they do for, say, Harry McKay, allowing him a run and jump at the ball, where his hands, height and jump make it tough for any defender.

I lost count tonight how many balls slid through his hands, particularly early; when Grimes outbodied him for a mark in the second term, it was notable that he took it on the chest. A notable improvement after half time was in the Blues lowering their kicking towards Curnow, allowing him to use his speed off the mark to get space enough from Grimes to safely mark on the chest.

It’s probably a testament to Grimes’ standing in the game that his ability to tackle Robbie Gray one week and Charlie Curnow the next – two more different players you could seldom find – and beat them both hands down seems run-of-the-mill for Grimes, and not as incredible an effort for a defender as you will see in the modern game.

Gone are the days when he became Alex Rance 2.0 and intercepted everything in 2019, but he remains one of, if not the, best lockdown defenders in the game.

The first half was a Tiger domination – 38-25 inside 50s and 24-14 in clearances chief among them. The Tigers are far from a renowned stoppage team – but cede to them in midfield, and you might as well pack up and go home.

Central to much of that was Dion Prestia, who remains among the most crucial Tigers of all – in a midfield full of developing up-and-comers and old hands, Prestia is probably their one genuinely elite ball-winner. Their season likely rests on his hamstrings.

25 points down and with just three goals on the board, the Blues knew exactly where they had to lift. And lift they did.

Not at first – the Tigers dominated the first half of the third term – but Carlton’s strength all year has been their ability to maximise their periods of dominance. No side has been able to turn a trickle into a torrent, into a wave, into a tsunami, as quickly as the Blues this year.

It happened twice in the second half – they kicked the last two goals of the third term, having won 12 of the last 15 inside 50s – really, the Tigers did well to keep them at bay as much as they did. Still, a 14-point lead at three quarter time was a point less than what the Blues spectacularly overran back in Round 1 – and perhaps it was that tension which prompted an all-in brawl after the siren.

Then, the second surge came after the Tigers seemed to have settled the issue with two early goals – Shai Bolton tempting fate by holding the ball out to an oncoming Blue while running into a certain goal, that while no danger of causing a blooper meant creating a match-defining image if they had lost from there.

His leads noticeably changed – after mostly charging out towards the 50 and into the Tiger set-up, he began to lead wide, into the pockets. Two of his majors came from the left pocket, the third after getting out the back of a spillage and kicking from the square.

In the end, it came down to a fingertip. A snap from Jack Newnes looked to have set up a grandstand finish, and drawn the margin to under a goal – but every Tiger thought Nathan Broad had touched it on the goal line.

And so the score review, despite some pretty flimsy evidence, found – the second time, after Bolton was deemed to have goaled from a similar incident in the second quarter, that a lack of overruling evidence benefitted the Tigers.

The Tigers surged the ball forward, the deflated Blues couldn’t match them on the rebound, and Shane Edwards snapped truly after a centring ball from activated medi-sub Maurice Rioli – it’s illegal for a Rioli to play any minutes and not have at least one smart play. That, basically, was that.

The Blues were never going to cope against 76 inside 50s – the most the Tigers have ever recorded in their history. Indeed, keeping them to 11 goals minus Weitering is a proud achievement.

But Richmond remain the masters of the wet. And in this form, no matter the conditions, nobody is going to want to play them in September.

The journey to B-Corp