Once more with feeling. As England’s battle-weary players try to summon up one last effort in their season finale, season, Australia are focussed on their start.

The deciding match of an intriguing three-Test series will be fought out at the Sydney Cricket Ground on Saturday, a venue steeped in Australia-England antagonism and sledging for more than a century. England have arrived on tour with a tactic of baiting that brings them little credit – not quite Bodyline but cut from a similar cloth of trying to find an edge from somewhere other than skill – but might deliver the Ella-Mobbs Trophy.

The English are less than a week away from their holidays, and prepared to rouse for one final niggle before hitting the beaches.

“It has been a tough year, the longest season I can remember for a long while,” said England captain Courtney Lawes this week.

Lawes has, reports Rob Kitson in the Guardian, played 26 major games for club and country in the past year, stretching back to three Tests against the Lions in South Africa.

“One last effort on Saturday and he can finally have a holiday but the amount of punishment he and several of his colleagues are having to absorb is colossal,” Kitson wrote.

Eddie Jones will broach no slackening in intensity from his team, but Australia’s assistant Dan McKellar suggests a quick start from the Wallabies could test English levels of fatigue.

“We’ve shown in both games a whole lot of character and worked our way back into the games but I think our growth and our improvement is around our start and knowing they’re at the back end of their season,” McKellar said. “We all know what that feels like but it’s  difficult to take advantage of if you’re down 19 points after half an hour.”

That’s how it transpired in Brisbane with Ellis Genge on a rampage, and Owen Farrell taking ruthless advantage of Australian discipline issues.

How much can the coaching staff prepare players for the start?

“It’s pretty random isn’t it? Do you have the ball, are you defending, the bounce of the ball can go against you,” McKellar said.

“What you’ve got to make sure you bring is intent and accuracy. And if you’ve got that on both sides of the ball you give yourself a chance to start well.

“We like to start our training sessions nice and fast – you can’t ease your way into a game. Intent and accuracy are critical in that first couple of minutes and that’s probably where we were down a little bit, certainly on Saturday night in Brisbane.”

While England’s physical dominance seemed to catch the Australians by surprise early in both games, the Wallabies have seemed unsure of how to respond.

“You go rushing in and all of sudden you’re on the receiving end of the yellow card,” McKellar said.

“It all comes down to emotional control and making sure that you’re not getting sucked into those sort of tactics and then understand that the officials will be world-class on Saturday night and it’s their job to look after that.”

What about fighting fire with fire? Get Taniela Tupou to smack on Marcus Smith’s chest, or Angus Bell to pin little Jack van Poortvliet’s neck into the turf, or Nic White to surprise Ellis Genge with a cheeky wedgie? Bait the baiters.

“We’ve got other things that that are much more important to worry about that will actually go a fair way to winning a Test series than worrying about trying to niggle people.” 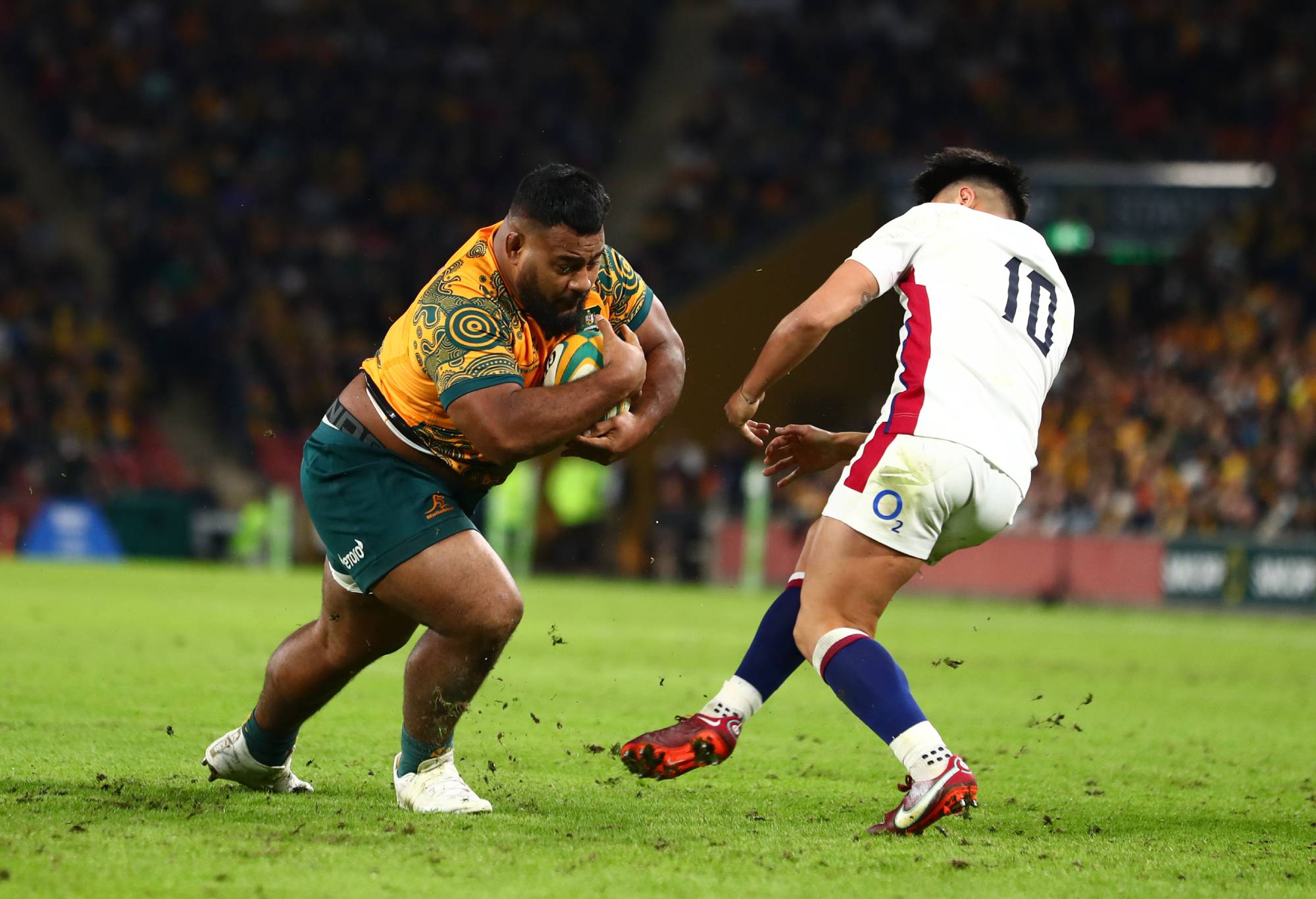 Taniela Tupou of the Wallabies runs the ball during game two. (Photo by Chris Hyde/Getty Images)

Fair enough. Among those worries ifs the Wallabies big injury list and test of their depth. Allan Alaalatoa is on course to return after missing Brisbane due to concussion, but there are only two fit locks with Matt Philip and Nick Frost likely to be backed up by Rob Leota moving from No.6 and potentially Lukhan Salakaia-Loto, plucked out of club fgooty in Brisbane.

“The game’s played at an incredibly high intensity these days, very physical,” McKellar said. “And sadly, we’re seeing more and more injuries and we’ve been unlucky in that area.

“Every now and then you’ll get clusters of them in a position but you’ve just got to make sure your whole squad is well prepared and ready to step up if required. In the current environment with COVID our 23 can change overnight. So everyone needs to be across the detail and the plan and individually prepared well to play well at the drop of a hat – we saw that with Noah in Perth.

“It doesn’t rattle the group. There was really good composure in Perth in and around Quade and a few incidents within the game. We had to adapt on the run and young guys these days just turn the other cheek and get on with it.

“That’s what was most pleasing and this week will be no different. We’re not the only ones with injuries they’ve got a few themselves. It’s part and parcel of international rugby that you’re gonna get bumps and bruises and, unfortunately, we’ve got a few but I’m sure if you went across all the international games over the last two weekends, it’d be a fair injury tally.”

McKellar said LSL had come back in from the wilderness in good enough shape to play a role on Saturday.

“Pleasingly he’s just got on with it and dealt with his non-selection,” said McKellar. “He put his hand up to play for his club in Souths which is great in terms of his attitude.

“I’ve had a couple of conversations with him. He looks to be in pretty good shape. He’s looked after himself. He’s moving offshore to a new club where he’ll want to turn up in good condition and earn the players’ and coaching staffs’ respect over there, so he certainly hasn’t dropped the ball.”

Playing a Test is “a significant step up in intensity and physicality and the pace of the game,” McKellar acknowledged, adding: “But he’s been there before and can call on that experience.”

McKellar understandlably wouldn’t be drawn on why LSL had been sidelined during the Reds Super run in.

“I’m not in that inner sanctum, so I’ve got no idea what was going on there,” McKellar said. “I’m just trying to keep my own stuff in order with whatever jobs I’m doing and at that point in time I was at the Brumbies. I’m sure he would have been disappointed not to be playing but for whatever reason it was I can’t answer that.”

England are also missing their premier lock in Maro Itoje after his concussion in Brisbane.

“Quality player,” said McKellar. “He’s very disruptive in terms of how he plays in and around forcing turnover, kick pressure, always those little effort areas.

“He’s built his career around being superb around effort areas and coming up with actions that probably aren’t celebrated by most but are valued by his teammates and by his coaches. He’ll be a loss but they’ve got plenty of depth, so I’m sure they’ll bring in a quality replacement.”

As it was in the second match, all eyes will be on the clash between Genge and Tupou – one every bit as spicy as Larwood vs. Bradman.

“Taniela, in his first game back after a long period out, did some really good things,” McKellar said.

“I thought his ball carrying was excellent. We’ve learned a couple of things in and around scrum in what the English tactics were there and he will be better for the run – there’s no doubt he’ll be in a better place in Sydney.”

Tupou was slow to get started in Brisbane, and referee Andrew Brace found fault with his technique on a few occasions.

McKellar was asked if he thought Jones had worded up the officials on what to expect from Tupou.

“I’m not sure,” said McKellar. “Coaches will have conversations with referees every week and I’m sure Eddie’s no different. Whether he spoke specifically about Taniela I can’t answer that. With 50 minutes of footy on board now he’ll certainly be in a better position to take onboard some learnings he picked up from Saturday night’s game.”