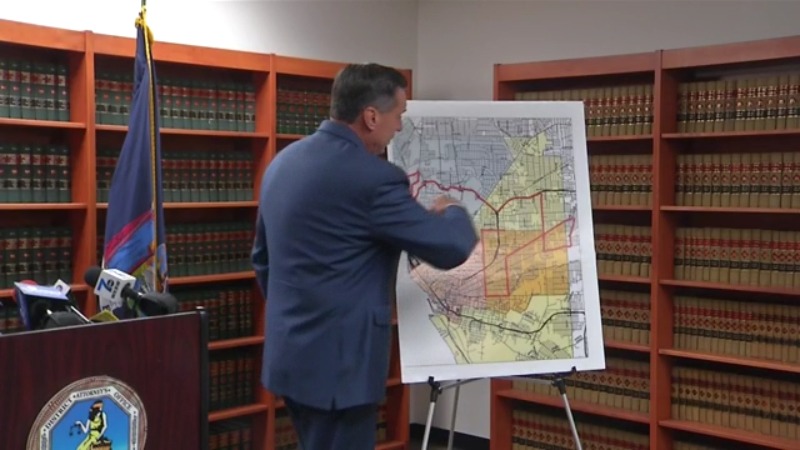 BUFFALO, N.Y. (WIVB) — Of the three officers who were shot during the pursuit of Kente Bell this past March, two were hit by friendly fire.

On Wednesday morning, Erie County District Attorney John Flynn provided an update on the charges against Bell, who has been indicted on five counts of first-degree attempted murder. Originally, he was only facing three counts.

During the chase, which spanned numerous busy streets and temporarily crossed into Cheektowaga before returning to Buffalo, numerous shots were fired. Flynn believes at least 14 came from Bell.

Of those shots fired, at least one struck a Buffalo police officer. Two other officers were hit by bullets from other officers. The DA made it clear that only one of the five counts of attempted murder against Bell pertains to the officer who was allegedly shot by Bell. The friendly fire bullets that struck the other two officers are not counted in those charges.

Although every shot fired by a police officer was legally justified, according to officials, Flynn indicated that some of the officers should have been safer about their weapon use.

“There’s no penal law that articulates common sense, so I can’t charge any Buffalo police officer with a violation of common sense,” Flynn said.

No charges will be pressed against any officers in relation to this incident.

In addition to the five counts of attempted murder, Bell has also been indicted on charges of criminal possession of a weapon, unlawful fleeing of a police officer and reckless endangerment.

At no point during this situation did Bell get out of the vehicle. Flynn says that due to being partially paralyzed, Bell drove a vehicle that did not require him to use his feet.

Approximately 16 officers fired their weapons, but the majority of the shots fired happened near the end of the situation. No pedestrians were struck.

When it comes to just how many rounds were fired by officers, Flynn said it was very high.

Bell was shot approximately three to four times. Flynn says he was struck in the hand, shoulder and a lower extremity. He’s undergoing rehabilitation at ECMC.

If convicted, Bell could spend 40 years to life in prison. And since Bell was on probation for a gun charge, Flynn said there’s a possibility that he could actually receive a sentence of 47 years to life, but he was unsure at the time of Wednesday’s conference.