Thanks to all for the fascinating discussions on The Roar forums since the weekend. Lots of food for thought!

I want to pass through the refereeing controversies arising from the Wallabies-Springboks game in Adelaide relatively quickly. A key background to both of the main incidents – Marika Koroibete’s tremendous cover tackle on Makazole Mapimpi and Nic White’s delayed response to Faf de Klerk’s clip to the face – can be found in Koroibete’s red card in the third game of the series against France last July:

The sheer force of Koroibete’s hit persuaded the referee to see red in this instance, but I suspect that would now be downgraded to yellow at most now, with mitigation found for Jelonch clearly dipping into the challenge.

The force with which Marika struck, and ran straight through Mapimpi can only be described as extreme , but at the same time the tackle is clearly well below shoulder height and there is an attempt to wrap with the left arm.

The reaction of French flanker Anthony Jelonch was very similar to Nic White’s after the slap by De Klerk: There is a pause and then the player goes down for the count.

Reds Harry commented, “I deplore White’s staging”, with support from Doctordbx: “Faf clipped him in the face, which is definitely an offence and needs to be dealt with. I think a penalty in this case would have been sufficient but the laws are the laws. White didn’t need to milk it with theatrics.”

Probably a penalty would have sufficed. There was contact to the face but it was minimal impact. The problem from South Africa’s point of view is that Faf de Klerk does have a history of reckless play and likes to play very close to the edge. As Peter K explained: “In many ways this is the way you need to play in rugby now. Players like Faf constantly niggle to instigate a reaction and draw a card or penalty.”

The lineout throw to Rory Arnold is not straight, and de Klerk goes out of his way to run past Wallaby hooker Folau Fainga’a and remind him of his mistake. He is by no means the only player who likes to niggle and draw a reaction.

In English club rugby, Saracens (and particularly Maro Itoje) have made it into an art form with their loud and extended whoops and hollers over every small victory in proceedings. In the NFL, ‘taunting’ and ‘unsportsmanlike conduct’ are punishable, and it is high time that Rugby followed suit. Soccer also has a penalty for ‘simulation’, and both White and Jelonch’s actions fell into that category.

The Arnold clip leads us neatly into a batch of questions about the Australian lineout, which went from bad to worse with a miserable 46% retention rate on own-ball at Adelaide. “Our lineout was a disaster”, said James584, with Bobby adding: “I don’t know if our lineout woes were the fault of Folau Fainga’a, [Matt] Philip, [Rory] Arnold or a combination of all three”.

For the second consecutive match, Rory Arnold failed to provide a single lineout ball to this scrum-half, and neither did his partner in the second row, the lineout caller Matt Philip. The twin sources of possession were two throws right over the top to Hunter Paisami, and two gadgets at the front to Jed Holloway.

The Wallabies only won one ball from an orthodox lineout with the starters on the field (to Holloway again), and another (to Darcy Swain) when the Brumbies lock entered the fray from the bench.

Tez commented: “[Rory] Arnold in the lineout is not working for some reason. Tupou and Swain did bugger all when brought on, both need to disappear from the 23.”

So, let’s look at some of the issues in more detail.

Australia threw the ball to Arnold on three occasions at the Adelaide Oval, and the 6 foot 10 inches ex-Brumby skyscraper won none of them. There is already one example above, where Fainga’a follows Arnold across the centre line with his throw and is called for ‘not straight’.

The Wallabies had already been backed into a corner by the Springboks’ success in closing the gap before the throw reached the receiver: 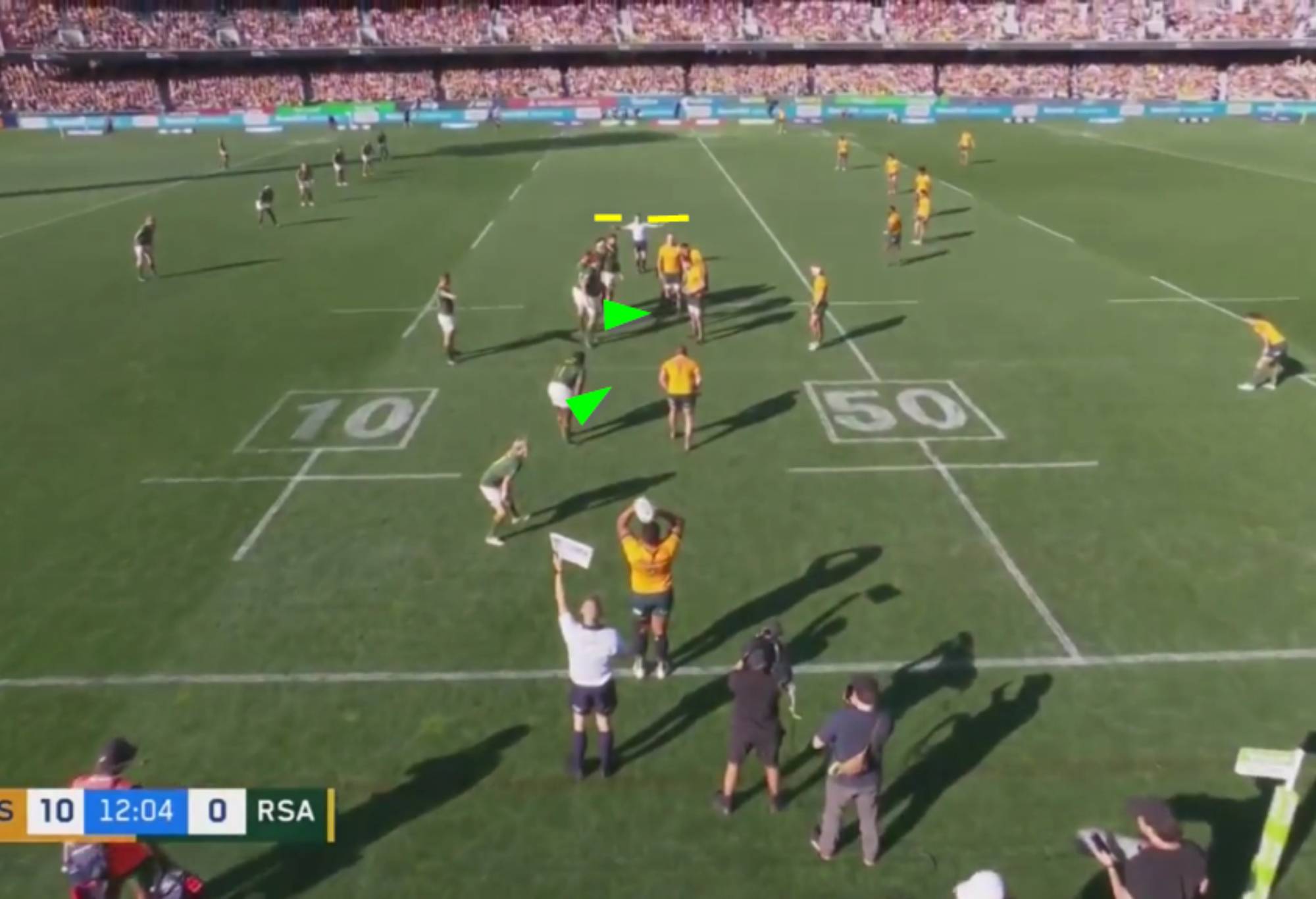 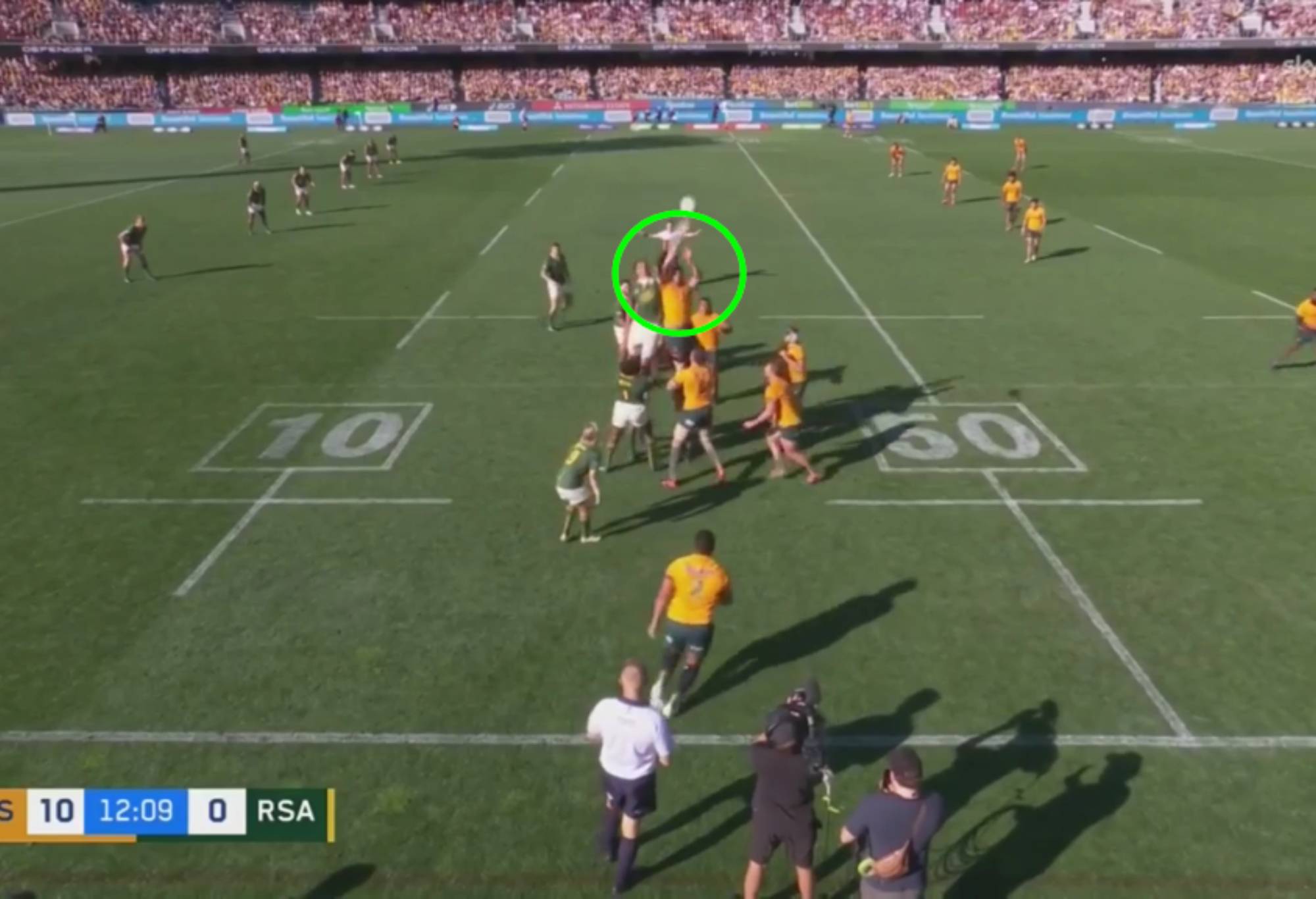 Referee Paul Williams is insisting on the gap at the start, but by the time the throw is delivered Eben Etzebeth is easily able to overlap arms with Arnold and prevent him making a clean catch. Here is the whole lineout ‘live’:

Part of the problem is there are too many moving parts before the ball is fed. The more time between set-up and throw, the more time the Boks have to close the gap down the middle. With Etzebeth facing towards the Wallaby goal-line and taking his read off Arnold’s feet in the first freeze-frame, the natural response is to get Rory off the deck quicker, with no movement up and down the line before the throw.

A second instance copied the first:

The throw only occurs on the third movement in the line, and by that time Lood De Jager has one arm in between Rory’s two. At his club Toulouse, Rory wins most of his ball off simple throw-triggers: the hooker delivers, and Rory’s height and speed off the ground ensure there is minimal chance for the opponent to get a counter-jump up in time.

Etzebeth was very savvy at the front of the line. He read Paul Williams right and realised he would allow contact in the air, and he was able to upset all of the Wallaby receivers by playing the lead arm:

What is the solution long term? Rhys said, “When Rodda returns that will make a difference at lineout.” Izack Rodda remains the best lineout captain in Australia and nobody else comes close – despite his all-round excellence, lineout calling is probably the weakest aspect of Matt Philip’s game.

What is best combination in the meanwhile? RahRah commented: “Philip is the best we have so stick with him. He showed great hands and vision in the lead up to the first try and worked so hard to cover for the lack of work by Arnold.”

The balance of power and work rate in the second row is worth more examination. Matt Philip was the work-horse ball-carrier in the tight five, with as many carries into contact (eight) as all the other tight forwards put together. He and Arnold were the premier tight forward cleanout artists, with 17 and 14 in the game respectively. Philip missed on four of his 11 tackle attempts while Arnold made five out of five.

Arnold’s other major impact area is lineout defence. Ironically, he won his one lineout of the game off a Springbok feed:

Give him a straight jumping contest with no prior movement before the throw, and Arnold will be a rich seam of lineout gold.

He is also a dominant maul defender, and a major reason why the Springboks never really looked like scoring a try from one of their patented close-range drives:

Arnold swims straight past the receiver (De Jager), and as soon as he gets a hand on Joseph Dweba at the back, the Springbok drive is dead in the water. Arnold is so strong in maul defence that the Bokke were forced to shift away from his ‘no-go’ area. That opened up opportunities for Australia’s other maul strong-man, Jed Holloway:

Arnold has the inside corner under total control and that allows Holloway to erupt through the opposite side on to poor Dweba for the sack. Swain was also effective as a maul defender when he came on, with another sack/turnover in the 54th minute.

There was also a lot of interest arising about the patchy performances from the world champions, who had been heavily favoured to win the match at the Adelaide Oval prior to the game. They are currently sitting at 50% in 2022, with three wins and three losses from their six matches so far:

Greco Dominicus commented: “The Springboks need some backline ingenuity, it’s bothered me for a long time that England win in Australia and we can’t. Whilst we don’t have a stellar record, we win more than we lose against the Poms even at Twickenham, I am sure I am correct over the last decade?”

Just Nuisance said: “A big problem is the massive disconnect between the type of rugby played by South African teams in the URC and what they are asked to do in the Bok set-up. [Jake White] needs to be heard, as do Swys de Bruin and Nick Mallett who are expressing similar misgivings. But sadly, it’s too late. We are stuck with this lot, with this game-plan until 2023.”

I recently wrote an article offering an explanation for the Springboks’ lack of obvious development since the 2019 World Cup triumph. It was sparked by comments from ex-Springboks coach Nick Mallett in his News 24 column, that the usefulness of the 6/2 bench had run its course:

“The real issue facing this team presently, I think, is the 6/2 bench split that has landed the Boks in trouble for three straight Tests now. It’s a real problem when you have to make virtually three changes to your backline when one player gets injured,” he said

“If you get a wing going off early, as Jesse Kriel did on Saturday, you suddenly have to make a lot of changes. We saw Damian Willemse go to inside centre, Damian De Allende to outside centre and, even worse, Lukhanyo Am moved to the wing after Kriel left the fray. That is a lot of reshuffling.”

The ironic part of Mallett’s summation was that Willemse’s move to number 12 enabled the Springbok back-line to look more threatening at Ellis Park than it has at any time since the 2019 World Cup.

Willemse’s presence at first receiver allowed the Boks to connect play out wide and link their long passers (Handre Pollard and Willie le Roux) together:

Damian Willemse gives South Africa the decision-maker that they have lacked up until now. For all of his virtues, Pollard is more of a natural second receiver than first:

With Willemse inside him, the Springboks can at last move Pollard to his best spot as a distributor. On attack at least, it would also mean shifting Lukhanyo Am out to the right wing, where he was so lethal against New Zealand. Am looked a different player on offence with the shackles at centre thrown off.

It is the addition of Damian Willemse, and the return of Cheslin Kolbe in the back three, that gives the Bokke supporters cause for optimism and some much-needed development ahead of the 2023 World Cup in France.

The problems will arise in getting the existing South African coaching staff to accept such a radical coaching solution. If we cycle back to the original question about South Africa’s recent matches against England and Australia, we discover a very similar pattern.

Against an understrength England at Twickenham in 2021, South Africa had 60% of territory and possession, they enjoyed twice the number of lineout feeds and they won the penalty awards 18 to 8. They still lost the try count by three to one.

Versus the Wallabies in Adelaide, they enjoyed 55% of territory and possession, won the scrum penalties by four to one and the overall penalty awards by 16 to 9. South Africa stole half of Australia’s lineout ball too, but the Boks were still 3-0 down on try count and 22 points adrift with only six minutes of the game to go.

Doesn’t that tell you something? The problem is not ball winning, it is ball usage, and the rigidity of coaching IP and selection ever since 2019. If you don’t see new opportunities, you won’t take them, and that is where South African rugby sits right now.

Suspected road rage in Amherst leads to 7 years in prison