It could be argued that many games of rugby league hinge on a few key moments: a dropped ball with the line wide open, a missed field goal, or according to most fans a refereeing decision or two, or three.

If we cast our gaze a little wider than this, we can identify other sliding doors moments that may have changed the very nature of rugby league in Australia and around the World. In this third installment, here are a selection of such moments relating to the 1990’s Super League War and some brief comments on what might have happened:

What if Super League had never happened?

There are so many what if’s arising from Super League. But what if it had never happened at all?

The 1995 premiership won by Canterbury was in a 20-team competition, including the Western Reds, South QLD Crushers, Gold Coast Seagulls, and no merged entities. You would think that 20 teams were not sustainable so something was going to give eventually.

Which clubs would have fallen over? I would suggest the Gold Coast would have gone sooner rather than later. Without the need for the ARL to find sufficient teams to compete with Super League, there would have been no incentive to keep propping them up. Other than that, I suspect Norths may have survived but Wests and even Souths would have been on shaky ground. Maybe we would have ended up with two divisions with promotion and relegation?

But Foxtel was still looking for content and if Murdoch couldn’t prise rugby league away from the Packers and Channel Nine, then rugby union would have received even more money and attention as it strove to become professional. Would union have overtaken league on the back of player defections and the like? I doubt it, unless a free-to-air channel was also along for the ride. History has shown that sports that go exclusively behind the paywall actually lose market share unless they are already the dominant player.

So the ARL would have soldiered along, run by ex-footballers, with no independent commission, and Sydney-centric (even more so). No further expansion would have been possible until some Sydney clubs ran out of funds and joined Newtown in the lower tiers.

What if Super League had ended differently?

There are so many permutations as to what could have happened during the Super League saga that I don’t even know where to begin. Here are a few questions:

What if Super League had won?

Well, they sort of did actually. It was mainly the ARL clubs that merged and died, we have all matches on Foxtel, and News Limited have invested in a number of franchises. 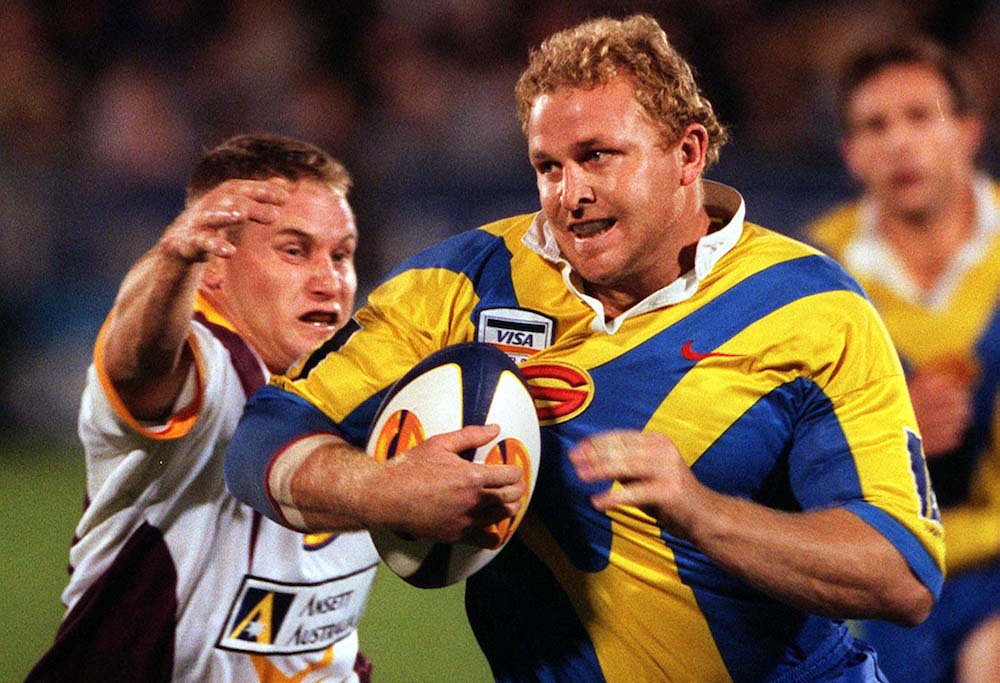 But if Super League had comprehensively won and the ARL had fallen over? We would have seen forced mergers between the Hunter and Newcastle. There would be continuing sides in Adelaide, and Perth, and I suspect Perth would by now be a very solid club, regularly making finals. Souths would be gone. Manly too I suspect, with Norths winning that mini-war, although they play half the time out of Gosford. I doubt that Balmain survives as Wests are smart enough to own the MacArthur region. St George would be permanently in the Illawarra. Expansion into Melbourne, instead of being put together from the remains of Hunter and Perth, would have used leftovers from Wests, Balmain, Manly and Souths.

New Zealand might still be competing in State of Origin, and we may still have the awful World Club Challenge series, but maybe News Limited would also have been motivated to inject more funding and strength into English football leading to genuine international competition. Maybe Toronto survives and a franchise is set up in New York.

Packer would have gone all in to try and grab the AFL, which would be on Nine and Stan.

What if two competing competitions had continued?

I’m not sure how this would have been feasible. But we could have a competition on Foxtel and maybe Seven and another on Stan and Nine. By now there would certainly be a Super Bowl between the two premiers and maybe even an All-Stars fixture. The ARL competition would be passionate and tribal but played out in front of crowds of up to 10,000 at most on the suburban grounds of Sydney, Illawarra, and Newcastle. There is only a slim possibility that the Gold Coast and South Queensland Crushers survive, as the NSWRL is forced to turn inwards and return to its suburban roots. There is no way that Souths or Norths or Balmain are left to die.

Super League would be a one-team-per-city franchise competition, covering the entire country and New Zealand. They give up on Newcastle where the Hunter Mariners players are pariahs and move the club wholesale to Gosford.

The 2022 premiers are Parramatta (ARL) and Penrith Panthers (SL). The Panthers win the Superbowl.

What if the peace deal had retained the Western Reds and Adelaide Rams instead of creating Melbourne and propping up the Gold Coast? 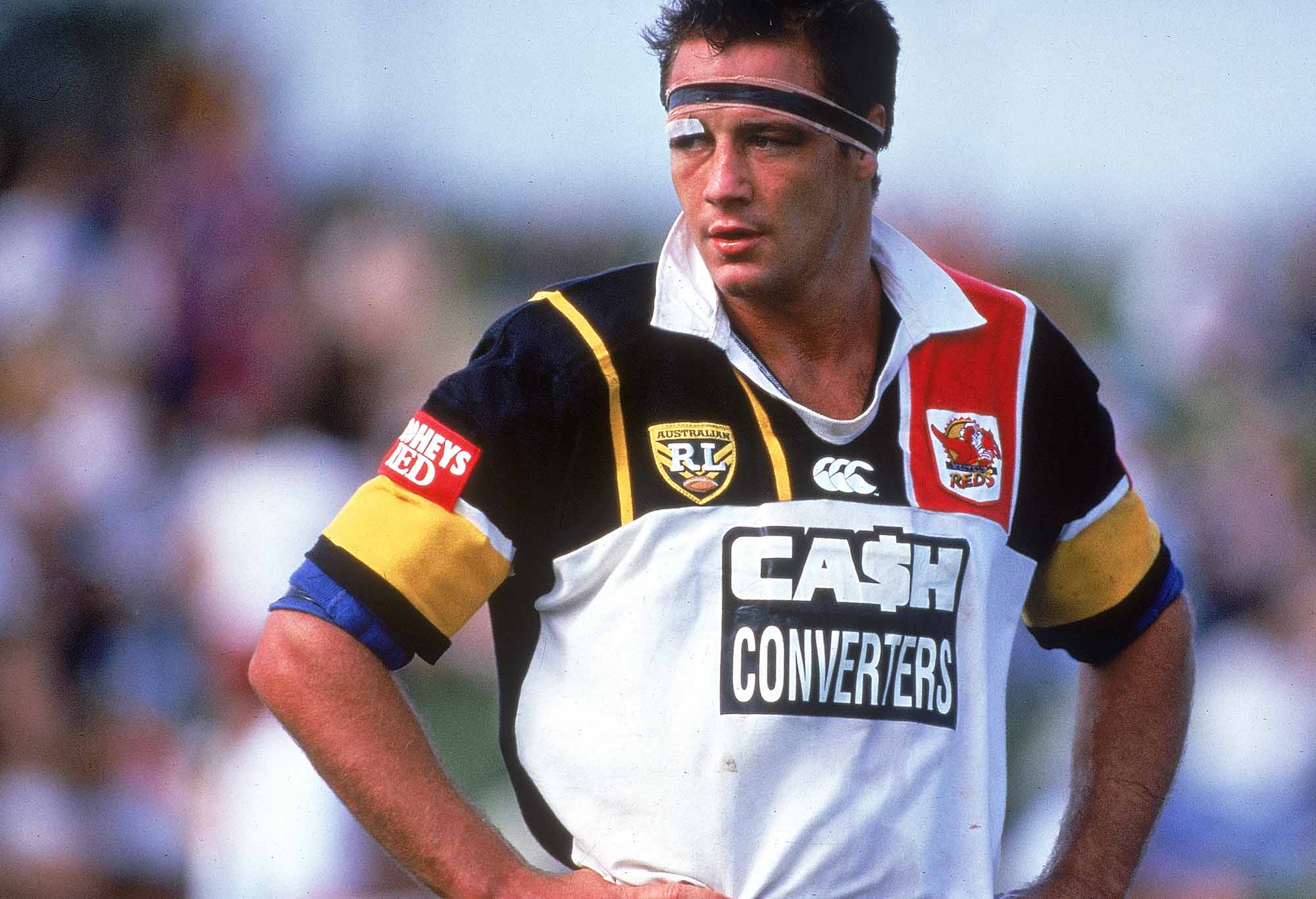 Mark Geyer of the Western Reds (Photo by Getty Images)

The Western Reds would be a very solid team after attracting mining sponsorships and benefitting from rugby’s own goal of cutting the Western Force. Instead of campaigning for the Force’s reinstatement, Twiggy Forrest now owns the Reds outright and they have three premierships to their name. By 2022 their team is comprised of more than 50% local juniors from the WARL competition.

The Rams continue to struggle, but benefit from picking up a bunch of Hunter Mariner players. They are like the New Zealand Warriors, tolerated but not considered a serious player in the rugby league landscape as they struggle for crowds and their development pathways are undeveloped.

The AFL does not bother with the Gold Coast Suns, but instead create a franchise in Tasmania and the island descends into a prolonged state of depression as they no longer have anything to be resentful for.

Craig Bellamy fulfills his destiny and coaches the Canberra Raiders, winning multiple premierships after bringing a raft of unknown Queenslanders like Billy Slater and Cameron Smith to the club in a repeat of the club’s golden era of the 1980’s-1990’s.

Melbourne is still considered foreign territory for rugby league, but eventually in 2005, Cronulla bow to the inevitable and become the Melbourne Sharks. They take some years to find traction but finally turn off the porch light in 2016.

The Western Reds hold the premiership in 2021, but the Roosters and Panthers are looking likely for 2022.

What if Souths had not won their way back into the competition?

A whole generation of South Sydney fans are disenfranchised. Middle-aged men weep when their kids grow up and support the Roosters. The Bring back the Bears campaign is not even noticed on the internet forums as Bring Back the Bunnies dominates. A disenchanted Russell Crowe throws his weight behind the Auckland Warriors. The bell is never rung.

With fewer sides, expansion is on the table and Perth is re-admitted to the competition. The Perth Pirates win the 2022 premiership after poaching Latrell Mitchell from the Roosters, having previously identified a young Adam Reynolds as the face of their franchise.

What if the mergers never happened? 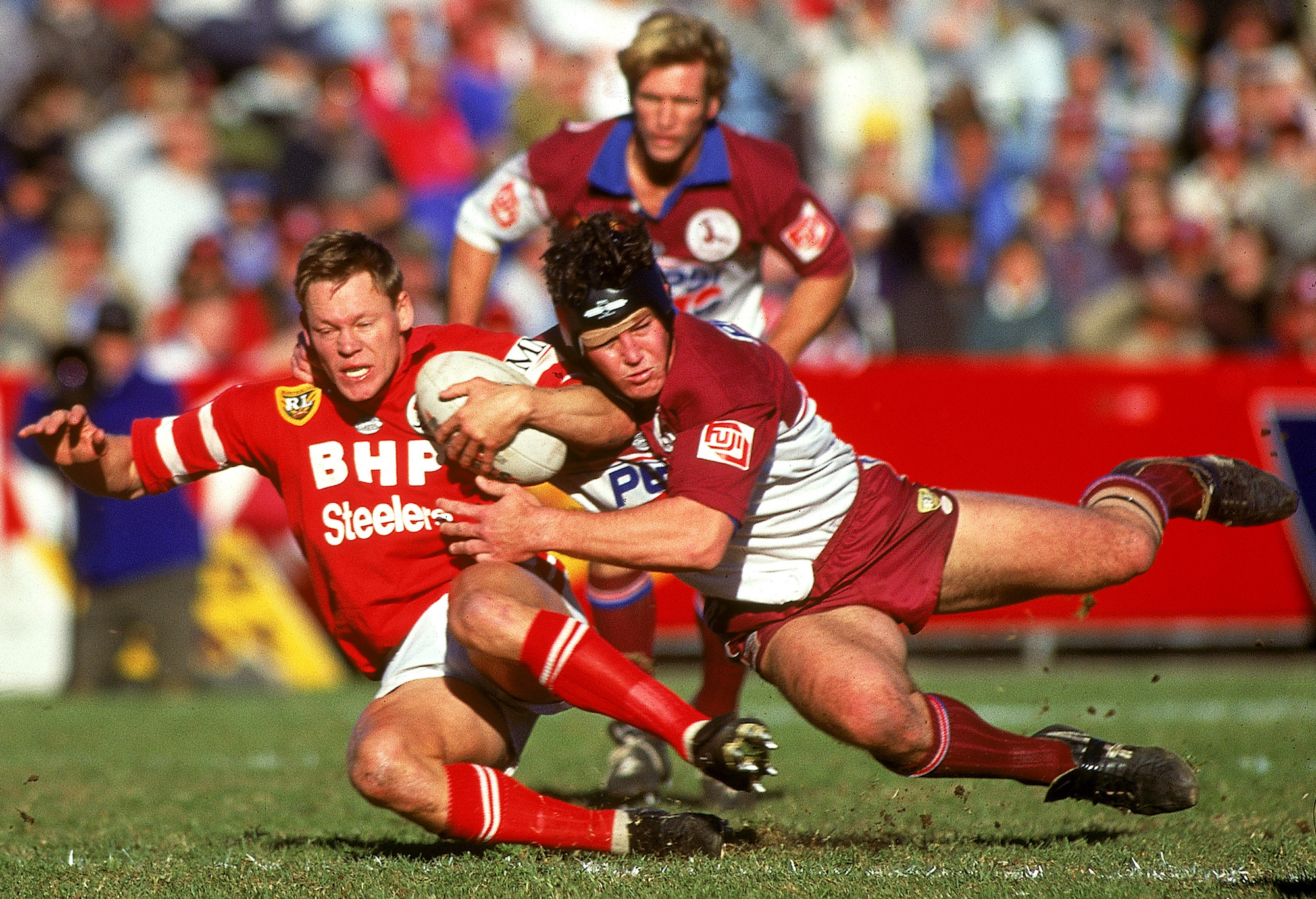 Balmain dies a slow death. Wests find a decent administrator and attract sponsorship as long as they embrace the MacArthur region. They become one of the most powerful and well-supported teams in the league.

Norths and Manly retain their animosity and the north shore derby is a calendar event. North Sydney Oval is pretty much saved up for those matches, with the Bears spending most of their time playing out of Gosford. Manly stay put and end up scrapping with Souths to be the next team to fall back to the NSWRL. The Newtown – Manly match each year at Henson becomes quite popular.

St George retains their rich history but ends up fighting Cronulla for survival. Illawarra continues as a Newcastle-like honest side of toilers.
And in 2022 the Norths Gosford Bears defeat the Wests MacArthur Magpies in a hard-fought premiership decider, their first in exactly a century.

Next time we take a look at the International game.