“We Never Stop” has become the catchcall of the Ange Postecoglou era at Celtic.

From the famous clip of a training session that did the rounds before a competitive ball had been kicked to a final mic drop after picking up the title, and now the club’s official slogan going into the second year of the Aussie coach’s reign.

With the Scottish season set to kick off on Sunday night, Aussie time, it’s worth reassessing what a great debut Ange enjoyed, and to look forward to what he has in store for the next 10 months.

‘We Never Stop’ is a pretty good summation of what Postecoglou’s first year was about: the relentless nature of his style, once it had bedded in, was what delivered Celtic to success in the league and returned them to the promised land of the Champions’ League.

After a nightmare start that saw the team lose three of their first six, they didn’t lose again in the league. Indeed, from October 1st, they only drew five games and won the other 26 games that they played.

That’s the numbers bit of the story. The mood shift was perhaps even bigger: Celtic under Neil Lennon, the previous coach, were a rabble with no tactical identity, a board in close to open war with the fans and a playing group that had been gutted.

Now, the club are confident, united and – for the first time in a long time – have a settled squad. Entering the difficult second season, things look quite rosy.

As a coach, Ange is a pure system operator: the system comes first and the players fit it. With that in mind, it’s not surprising that he has used the off-season to mend positions that needed attention and to work on refining the tactical identity, rather than another wholesale overhaul.

The influx of cash from the Champions League, estimated at AUD$70m, is huge for a club in the Scottish Premiership, but Postecoglou has largely used it to consolidate rather than go on a spending spree.

This speaks to two things. First, Celtic spent in January with players from the J-League, where Ange previously worked, and essentially speculated to accumulate in getting those guys in early, winning the league and therefore getting the Champions’ League cash.

Second, the squad that Ange put together in 2021/22 was already largely new and adding three or four new players would just as likely require another bedding in period.

You could add a third category too, because several of the Japanese players – Reo Hatate and Daizen Maeda – went straight from a J-League season that runs on a calendar year to a Scottish season that runs from August to May, and had thus played nearly 18 months straight by the time they got a break.

The other two Japanese, Kyogo Furuhashi and Yosuke Ideguchi, were also long-term injured last year and would have benefitted more from time on the training ground.

Entering the second year of the system, it would be expected that Ange would integrate the more complex aspects of his philosophy.

That seems to have happened already: Joe Hart, the goalkeeper, has been playing far higher up the field in the pre-season friendlies than ever seen last year, while the diversity of options in the midfield and wingers seems to allow several different attacking styles.

Celtic seem intent on doing Plan A, but better and more so. The style has been built around two solid centre-backs, both fullbacks inverting and central pivot, creating what is known as a 2-3 rest defence when the team has the ball.

Carl Starfelt and Carter-Vickers as one line at the back, assisted by an advanced Hart to create passing options, with Greg Taylor and Josip Juranovic playing well inside alongside deep-lying midfielder and captain Callum McGregor as the three in front. 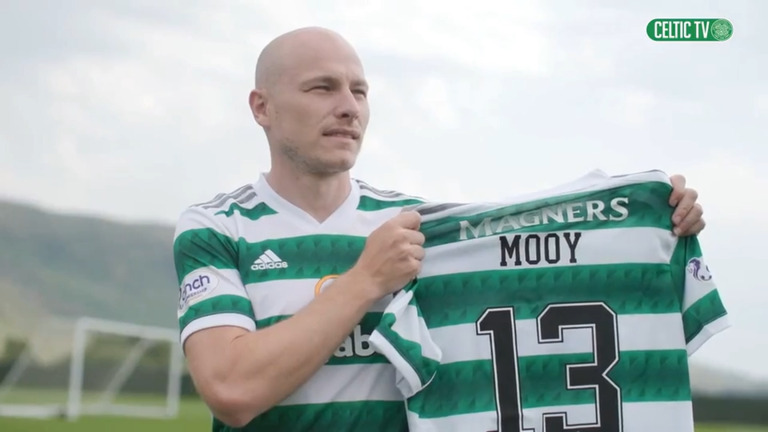 In front of that, Hatate and one of Matt O’Riley – Tom Rogic 2.0, after the Socceroo left at the end of last year – play as attacking midfielders, while Maeda and Jota stick high and wide with Kyogo through the middle.

Off the bench, there are plenty of options. Giogos Giakoumakis tends to replace Kyogo late in games – I like to think of him as The Greek God of Fouls, such is his ability to hold the ball and attract (or simulate) contact – while Liel Abada and David Turnbull can provide goal threat. Mooy and Ideguchi seem to be the preferred options deeper in midfield.

From a coaching perspective, Ange’s approach to winning his second title in Scotland seems predicated on the idea that last year’s championship was secured with a half-baked idea of the system.

That’s quite true: there were still times where it looked shaky, where played had to be convinced to believe in what they were doing. In big games, notably against Rangers and in the Europa League, they often failed to play from the back enough, to back themselves to beat opposing pressing traps and to pass their way out of trouble.

Such cultural challenges, especially with 60,000 nervous fans on your back, urging you to just punt it up the park, are difficult to overcome.

Celtic exist in a unique situation that most managers fail to deal with. Against 10 of their 11 domestic opponents, they play a game of attack v defence, so it behoves the team to have an offence-first mentality based around highly technical players who can defeat ‘park the bus’ tactics.

Then in Europe, they are the minnow who has to thwart opponents with much larger resources and thus deeper talent pools. Ange faces this issue head on as the club returns to the Champions’ League group stages this season.

In the last 15 years, when the team has been successful in Europe it has been with a setup that was, at its core, defensive: they could score from set pieces and keep the opposition out.

Gordon Strachan, who reached the knockout stages of the Champions’ League several times, was largely unloved by fans because his style, while effective in Europe, was brutal to watch at home to Ross County and Livingston. Celtic fans want to be entertained.

Conversely, Brendan Rodgers’ attacking style lead to an unbeaten season and huge trophy hauls in Scotland, scoring lots of goals on the way, but also several thrashings in Europe. Rodgers adopted ‘pragmatism’ against the likes of Barcelona and PSG, but copped big losses anyway. You can’t switch philosophies overnight.

By the looks of it, Postecoglou has adopted the mantra of famed Glasgow comedian Limmy: “don’t back doon, double doon”.

There had been talk of Vinicius Souza, a physically dominant defensive midfielder, being signed to assist in Europe, but Ange seemed less than keen.

Instead, the addition of another passer, Aaron Mooy, to play in a deep midfield role suggests that Celtic will approach their games against better funded opponents head on.

There were occasions last year – a 4-3 defeat away to Real Betis, a 3-2 defeat away in Leverkusen and a 3-2 win away in Budapest against Ferencvaros – that gave rise to the idea that Celtic were going to stick to their guns, regardless of situation.

Fans generally cry out for 5-4-1 ‘pragmatism’ to avoid a horsing at the hands of big clubs. I would contend that those fans a) don’t know much about Ange Postecoglou and b) playing in a manner so divorced from the usual is likely to invite a horsing, rather than abate one.

I might be very optimistic, but the idea of an 11-man press, egged on by a rabid Celtic Park, is more likely to put the willies up an opponent than a team attempting to park the bus without knowing how to shift gears.

He’s been there, done that, and with a fresher team, a new upgrades added and a full pre-season, uninterrupted by UCL qualifying ties, to work on tactics, fans can be confident that Celtic will improve going into 2022/23.

In Europe, many will see banking the Group Stage cash as a win in itself, and everything else a bonus. A lot will depend on the draw – it is entirely conceivable that Celtic will get three teams that they will have little hope of beating – but fans will want to see progression, even if performances don’t translate to results.

If the team could scrape third place and drop into the Europa League, then a first knockout European win since 2004 would represent progress. That, allied to another league win, will take Ange’s stock, already sky high, yet higher.

He’s already the best Australian manager ever in European football. And it’s only just beginning. It never stops, especially at Celtic, as Postecoglou is about to find out.

Life Insurance for Millennials – Do You Need to Get It and How Much?