Which AFL teams will finish top four in 2022 to earn a double finals chance?

Since the Australian Football League (AFL) began the final eight system in 1994, very few teams have won the premiership when finishing outside the top four.

The only exceptions have been Adelaide (1998) and the Western Bulldogs (2016,) who won from fifth and seventh respectively after the home-and-away season.

With only two wins separating first to ninth (50 per cent of the teams) after 13 matches for each team, the 2022 season appears one of the tightest seasons ever in the history of the AFL and its predecessor the Victorian Football League.

We have to go back to 1965 to find a similar close season after each team played 13 matches when 50 per cent of the teams (six of 12) were within one win of each other fighting for a top-four finals position.

Just four weeks ago, four wins separated first to eighth, with Melbourne sitting on top undefeated with 10 wins before losing three matches in a row.

But given the nature of the matches so far between the top 10 teams, it is anyone’s guess who will finish top four to earn a double finals chance in this tough year when at least 10 teams are capable of beating each other, as proven so far by 2022 results.

Given the very mixed 2022 results thus far, who really knows which four teams will do best in the remaining nine rounds?

It may well be that injuries will decide the fate of many teams.

Take Melbourne. Even allowing for the return of star defender Steven May, the Demons will have to overcome the loss of their star ruckman Max Gawn for a number of weeks at a time when Melbourne lacks tall forwards who can kick goals with Tom McDonald also out for a lengthy period.

Richmond will be without key player Noah Balta for a lengthy period after he re-injured his hamstring last Thursday against the Blues.

St Kilda will be without Jack Steele for a few more weeks.

Sydney has Josh Kennedy out for around six weeks.

Yet, other top-10 teams may be strengthened in coming weeks.

Collingwood could regain Jack Madgen in 1-2 weeks and Brodie Grundy in about four weeks.

Fremantle, despite losing forward Sam Switkowski for a lengthy period after he fractured his back, will regain key players Matt Taberner, Blake Acres and Heath Chapman.

Geelong will get back Patrick Dangerfield and key defender Jack Henry, although Brandan Parfitt will miss a few weeks.

Western Bulldogs, although missing the talented Bailey Smith for two suspensions for the next three weeks, will welcome back key player Josh Bruce.

Of the current top-four teams, separated by just one win, Geelong appears to have the easiest remaining draw with just five matches against current top ten teams: Richmond at the MCG next Saturday, Melbourne (H), Carlton (A), Western Bulldogs (H) and St Kilda (H).

With three of the games at Geelong’s home ground of Kardinia Park, the Cats could well win most of these games.

Fremantle has six matches: Carlton (A) next weekend, St Kilda (A), Sydney (H), Richmond (A), Melbourne (H) and Western Bulldogs (A).

While Fremantle plays four of these matches away from Perth, they are yet to lose a match in Victoria this season, having defeated Geelong and Melbourne away from home.

Melbourne has one of the toughest remaining draws with seven matches against top ten teams: Brisbane (H), Geelong (A), Western Bulldogs (A), Fremantle (A), Collingwood (H), Carlton (H), and Brisbane (A). 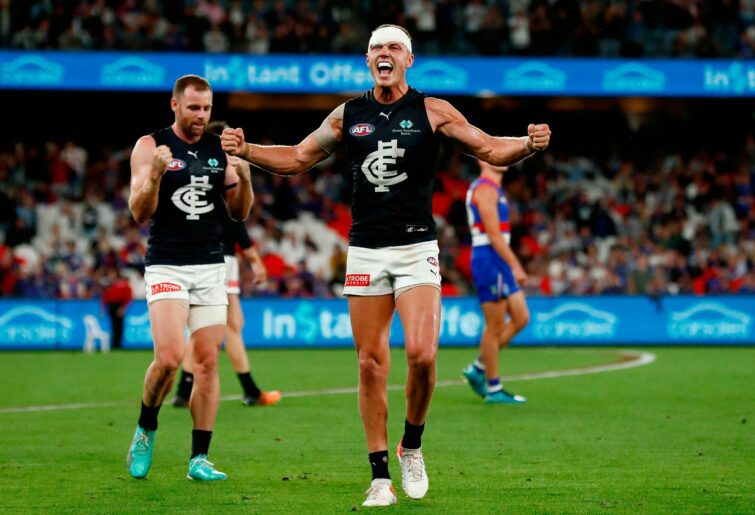 St Kilda has a very tough draw with seven matches against top-10 teams: Sydney (A), Carlton (A), Fremantle (H), Western Bulldogs (A), Geelong (A), Brisbane (H) and Sydney (H).

Obviously, Richmond, Collingwood and Western Bulldogs start their bid for a top-four finish 2-3 games behind the top three teams, a tremendous disadvantage to overcome with only nine matches remaining.

However, when we look at the last nine games, both Richmond and Collingwood meet the top ten teams only three times each compared to 5-7 such matches for the higher ranked teams.

Collingwood plays Melbourne (A), Sydney (A) and Carlton (A), but not until the last three rounds, although Collingwood must also overcome their relatively low percentage compared to the other top-10 teams.

The Western Bulldogs, who start three games behind the top three and two games behind fourth, have six matches against higher-ranked teams: Brisbane (A), Sydney (A), St Kilda (H), Melbourne (H), Geelong (A) and Fremantle (H).

Notwithstanding the luck needed with regard to injury and the remaining draw, the top-10 teams must win their matches against lower-ranked sides which have beaten a number of top-10 sides throughout the 2022 season.

We have an exciting rest of the season ahead.

While I favour Fremantle to win the flag should they achieve a top-four finish, nothing will surprise me about which teams finish top four given that nine teams are currently only separated by two games.

For what it is worth, I believe the top four will include Geelong, Brisbane and Fremantle while the fourth spot will be between Melbourne, Sydney, Carlton, St Kilda, Richmond and Collingwood.

So, Roarers, who do you think will finish top four to earn a double chance in what looks like being a very competitive AFL finals series given the 2022 form so far?