Who are the NRL’s least statistically interesting players?

What was most interesting was the tactical overlay used to imbue ‘the Unicorns’ with a coherent identity. However, I sensed weakness. It’s not that the Unicorns are one-dimensional – quite the opposite. It’s that they’re so multi-dimensional as to defy coherence.

There are starting props who do “nothing” at a high rate of intensity. A loose forward who would offload in an empty room, and quite possibly start a fight in there while he’s at it. There are a couple of very dubious and non-complementary combinations on the edges and a halfback who does nothing but kick.

So, turning Mike’s premise on its head, I decided to select a team of players who don’t stand out in any particular way. They graft and grind and do pretty much what you’d expect every week. Most importantly, they do exactly what their teammates expect every week. They’re the Vogons.

If you’re not familiar with the world within Douglas Adams’ Hitchhiker’s Guide to the Galaxy series, the Vogons are the thick-skinned, slug-brained backbone of the galactic civil service.

As Adams wrote, “The frightening thing about the Vogons was their absolute mindless determination… [and] their blinkered, bludgeoning insistence on being bludgeoning and blinkered”.

In other words, give the Vogons a job and they’ll damn well finish it, even if it means pursuing their quarry across the length of the galaxy, and even if the job has long since become redundant.

There are a few players here who match that description. Send them to the shops for milk and bread and that’s exactly what they’ll come back with. It might be the home brand variety, but they do the job.

Without further ado, here are the Vogons. Their Unicorn counterparts are in brackets.

Granted, Dylan Edwards is an interesting player and something of a standout given he plays for Penrith. While I doubt the Panthers would trade him for anybody, he’s just not in the standout class inhabited by James Tedesco, Latrell Mitchell, Tom Trbojevic and Ryan Papenhuyzen.

He’s the new Mr Perpetual Motion and would probably pursue you across the galaxy if he had to. Looking at his overall body of work, the total output and impact are middle of the road. But he just keeps on going and going and eventually gets the job done. He’s a great loss to the civil service.

Remember, we’re mostly looking for boring but reliable here. That rules out the elite finishers and the best of the bulk metre-eaters and tackle busters who get through transition. For different reasons, it rules out Newcastle’s outside backs.

The Warriors have a tradition of flamboyant or unusual wingers who’ve stood out in their own ways. Think Manu ‘the Beast’ Vatuvei, Francis Meli and David Fusitua. Even Dallin Watene-Zelezniak’s entertaining – all sound and fury without being effective.

Enter Marcelo Montoya, the anti-beast. He runs enough and makes enough metres to be useful in the backfield. He can get across the try-line on the rare occasions the Warriors produce a coherent backline move and doesn’t make many mistakes. Boring but reliable.

Before a succession of injuries, Mikaele Ravalawa was having a perfectly ordinary season. Not bad, not good, just ordinary. He’s Xavier Coates without the speed and aerial ability and playing for a bad team. While he’s more likely than Montoya to make mistakes or concede a daft penalty, he’s got a little more X-factor. Just a little.

This is where coach Mike of the Unicorns started picking types. The Vogon selector fleet will look to counter, while remembering that the only standout quality permitted is the lack of a standout quality.

While watching the Cowboys and admiring the chaos created by the likes of Tom Dearden and Jeremiah Nanai, it’s sometimes easy to forget that Peta Hiku exists. 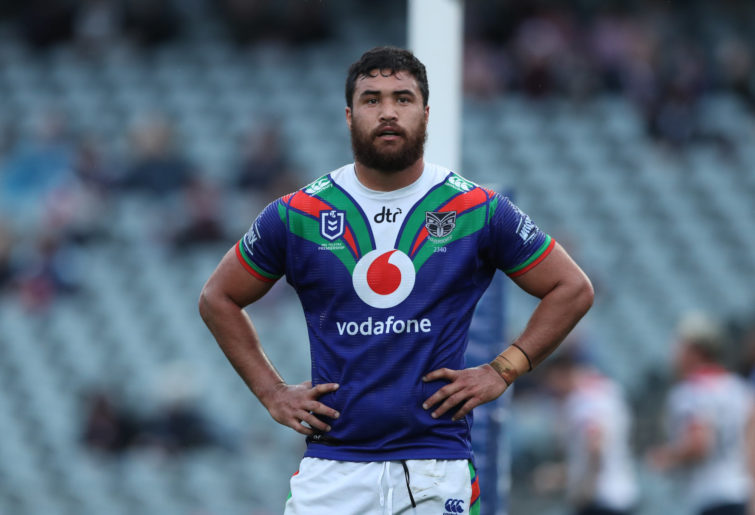 Then you notice him when Nanai flails at another passing attacker. Hiku’s not quite as effective as Staggs defensively or in terms of running impact, but he’s a more rounded player and can do a job on Staggs in his own blinkered, bludgeoning fashion.

Tom Opacic is the guy you confidently dispatch down the shops with verbal instructions, or who you send out to deal with somebody like Koula. He’s remarkably unremarkable but does a nice job as a link between Shaun Lane and Maika Sivo on Parramatta’s left edge.

The Vogons have a steady and solid backline to contain their Unicorn counterparts and deal with Burton’s kicking game, to the extent possible. Now it’s time to differentiate.

Luke Brooks is statistically unremarkable because he rarely plays to his strengths. The Vogon chief coaching officer will send him out there with a very clear instruction: ‘don’t think, just run’. Brooks’ best work usually happens when he engages with or gets through the defensive line and plays off-the-cuff.

He need not worry about kicking either. Don’t think, Luke, just run!

Halfback is tricky because for this team to work we need somebody who can be the primary kicker and a running threat – the Vogons can’t match the Unicorns for metreage in key positions and need to make up for it with better defence and all-round threat with ball in hand.

Jake Clifford has, as far as I’m concerned, been unfairly scapegoated for Newcastle’s miserable season. He can play a key role given the Vogons will be relying a bit more than their opponents on long kicking, an effective chase and putting pressure on the fancy-Dan unicorns expected to run the ball in place of their non-existent props.

Clifford’s prorated kicking numbers compare favourably to the better halfbacks, he can sneak through tackles and isn’t a bad defender. It’s a solid skillset with nothing really standing out.

When I named Corey Jensen in my team of mid-season surprise packets, I remarked that “he’s put-up big run metres, tackled like a demon and, well, that’s it. What more could you want.” Nothing. Absolutely nothing.

When NSW named Jordan McLean in their team for Origin three earlier this year, some Blues fans were perplexed. A common question was: where’s Reagan Campbell-Gillard? While the willing but messy RCG would not have been out of place, I thought McLean was ideal.

He does everything well enough to be one of the top-20 props in the game, without having a standout quality. He doesn’t make mistakes and, most importantly, he does stuff. Lots of stuff. 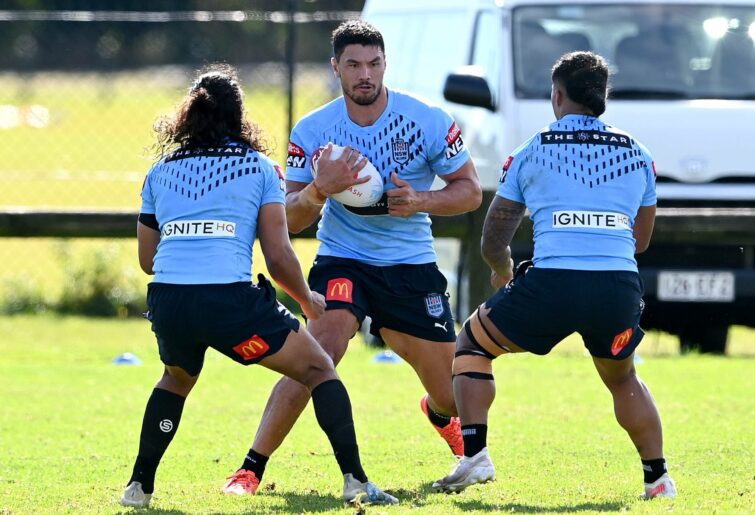 This isn’t a joke, well not entirely. Andrew McCullough is a favourite punching bag for Dragons supporters. He’s certainly a long way past his best.

While I included him in a mid-season team of players who’re on the verge of becoming redundant at NRL level, something in his numbers stood out to me. McCullough’s very good at what he does, it’s just that what he does isn’t very good, at least not for long.

All the Vogons need is for McCullough to dish to his teammates and tackle everything that moves for 25 minutes. He can do that and do it well.

The Vogons need some punch here without getting too fancy and there are a couple of ideal candidates.

Nat Butcher reminds me a little of Alan Cann, Brisbane’s unfashionable second rower of the 1990s. Like Cann, Butcher’s nuggety, surprisingly quick and can find his way to the try-line. He does everything well on both sides of the ball.

Jaydn Su’A’s been, just quietly, one of the best edge back rowers in the NRL over the last month or so. Not that you’d know it. Unlike many of his Dragons teammates, he’s a competent tackler along with being a damaging ball-runner.

I’m taking a liberty here, but Drew Hutchison has played plenty in the middle for the Roosters this season, is a big body, has demonstrated over the last couple of seasons that he can handle a defensive workload and has the skills of a half, including a good kicking game.

I’ve been banging on to anybody who’ll listen and for longer than is healthy that the Dragons should bring him back as a lock.

Josh Aloia and Jaimin Jolliffe will rip into the suspect Unicorn defence while defending well themselves. Corey Harawira-Naera will continue the niche he’s recently carved out at Canberra with an extended spell in the second half.

Until Wayne Bennett signed-up, I was maybe the only member of the Jeremy Marshall-King fan club who wasn’t related to him. I always liked him and he’ll come on for McCullough toward the back end of the first half and do his patented mix of understated running and passing.

The Vogons are looking to attack from deeper using a combination of Dragons-style bludgeoning and sweeping attacking flourishes in the style of Penrith and Cronulla, just with mostly inferior players.

The Unicorns will get themselves into better field position and have two kickers who can pile on pressure, but some questions have to be asked about their middle forwards and their defence on the edges.

Ultimately, it was a fun exercise and it matters little. Let’s just say that the Unicorns will edge in-front 4-2 at half time, with the Vogons profiting from some good fortune to scrape home 5-4 in the latter stages.

Read the DOJ’s redacted affidavit from the Trump search