The Parramatta Eels and their fans are becoming ever more each year haunted by the stigma of holding the longest premiership drought in the NRL but this should not be the case.

Parramatta and Manly should have been retroactively awarded the 2007 and ‘09 premierships after Melbourne were found guilty of rorting the salary cap over the course of four seasons.

The NRL in 2010 – after the media and not its own auditors uncovered the scam – struck the Storm’s accomplishments from the record books.

Just like the infamous 1988 Olympic men’s 100m final, the prize should have gone to the runner-up. Ben Johnson was found to have been on steroids during the infamous race in Seoul and Carl Lewis, at least at the time of that event, did not fail a performance-enhancing drug test.

The Eels of ‘09, after their famous run of upsets through the playoffs came to an end with a 23-16 defeat to Melbourne on Grand Final night, should be remembered as the premiers.

Likewise, Manly two years prior, in a match which is now largely forgotten, should be considered the 2007 champions as they were there in the premiership decider, going down 34-8 to a side which had deliberately circumvented the rules to lift the trophy. 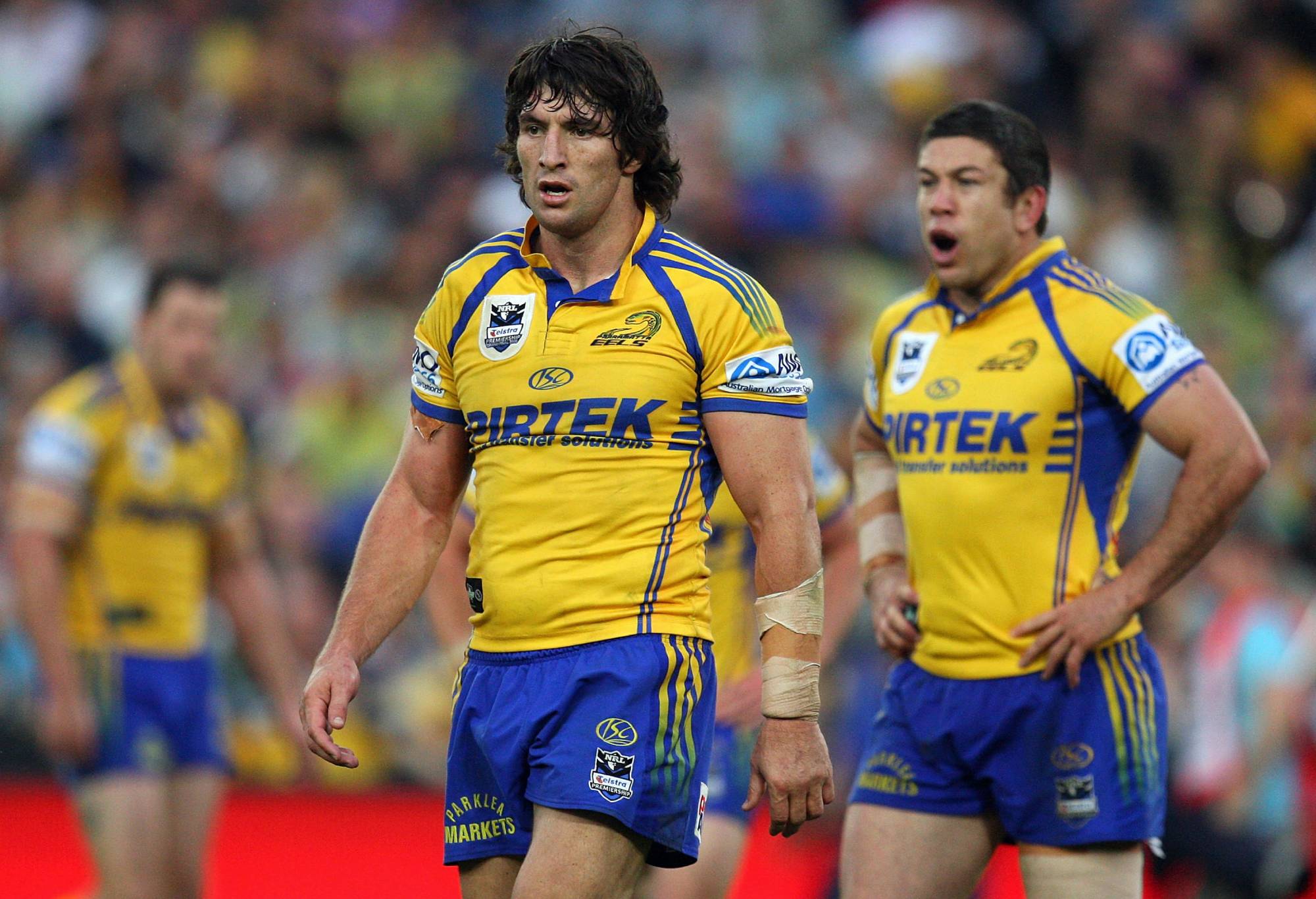 Melbourne were fined $1.6 million and also stripped of the minor premierships from 2006-08 and the 2010 World Club Challenge trophy which should also mean those respective titles belong to the Bulldogs (‘06), Sea Eagles (‘07 and ‘08) and Leeds Rhinos.

”The record books will say that the premierships for 2007 and 2009 are stripped,” NRL CEO at the time David Gallop said. ”They [Manly and Parramatta] didn’t win the premierships, they were beaten by a team that’s had the title stripped.

”But just like when we’ve had instances in the past where two points have been taken, we believe it’s appropriate that the points are taken but not replaced.” 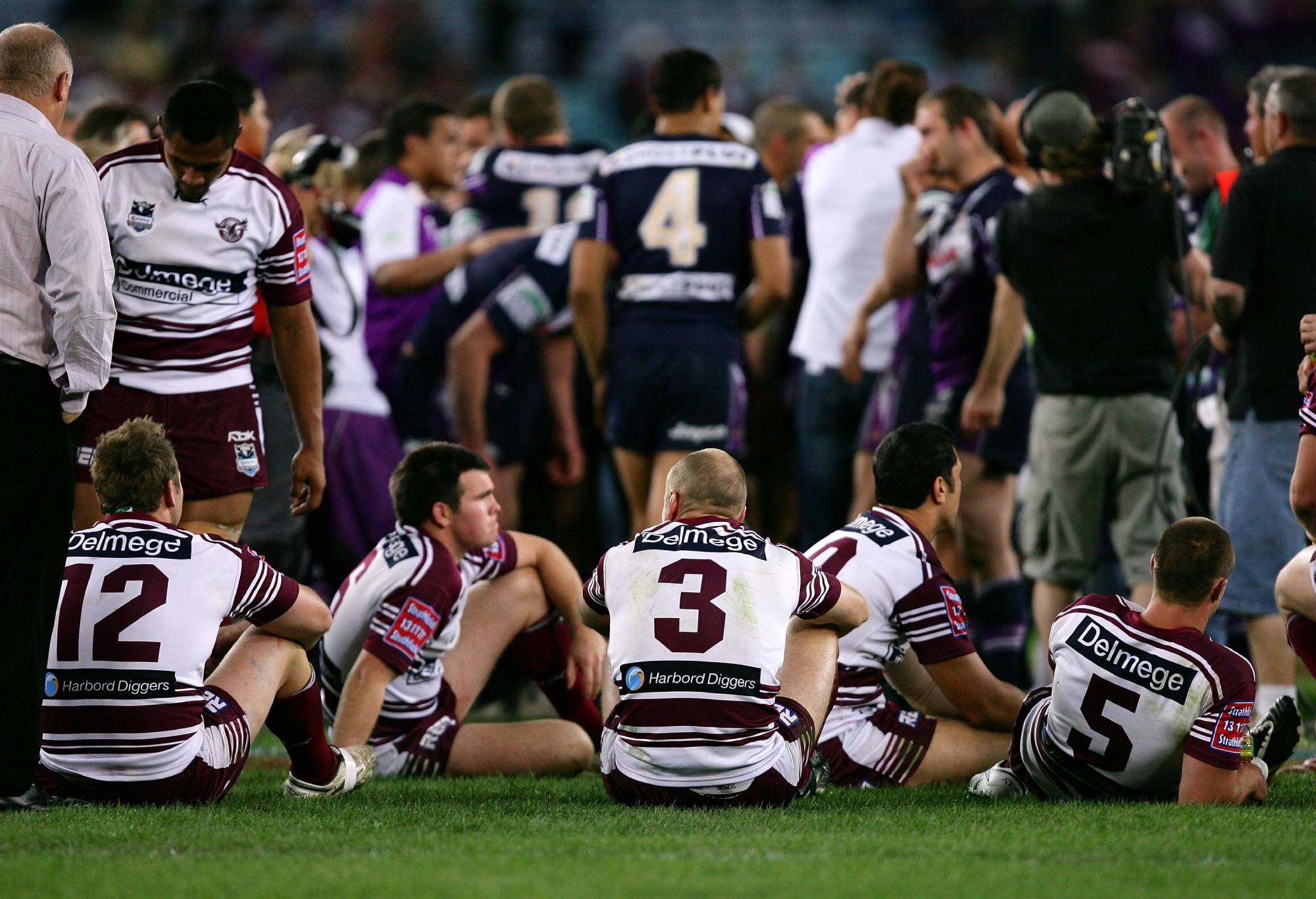 It seems surprising that the two clubs accepted the verdict – the Eels’ CEO back then, Paul Osborne, said “I suppose it is a little disappointing for us and our fans in particular that this has happened to the team that knocked us off” while Manly owner Scott Penn said it was “not our place to push for it” after he discussed it with his directors.

Eels stalwarts Nathan Hindmarsh and Nathan Cayless both lived through the pain of Parra’s 2001 Grand Final choke against Newcastle and their minor premiership-winning team four years later which crumbled in a heap 29-0 at the hands of North Queensland in the preliminary final.

Let the record state that they made amends in 2009, particularly if it means an end to the tired jokes and ribbing Hindmarsh cops on Fox League about not having a premiership ring. 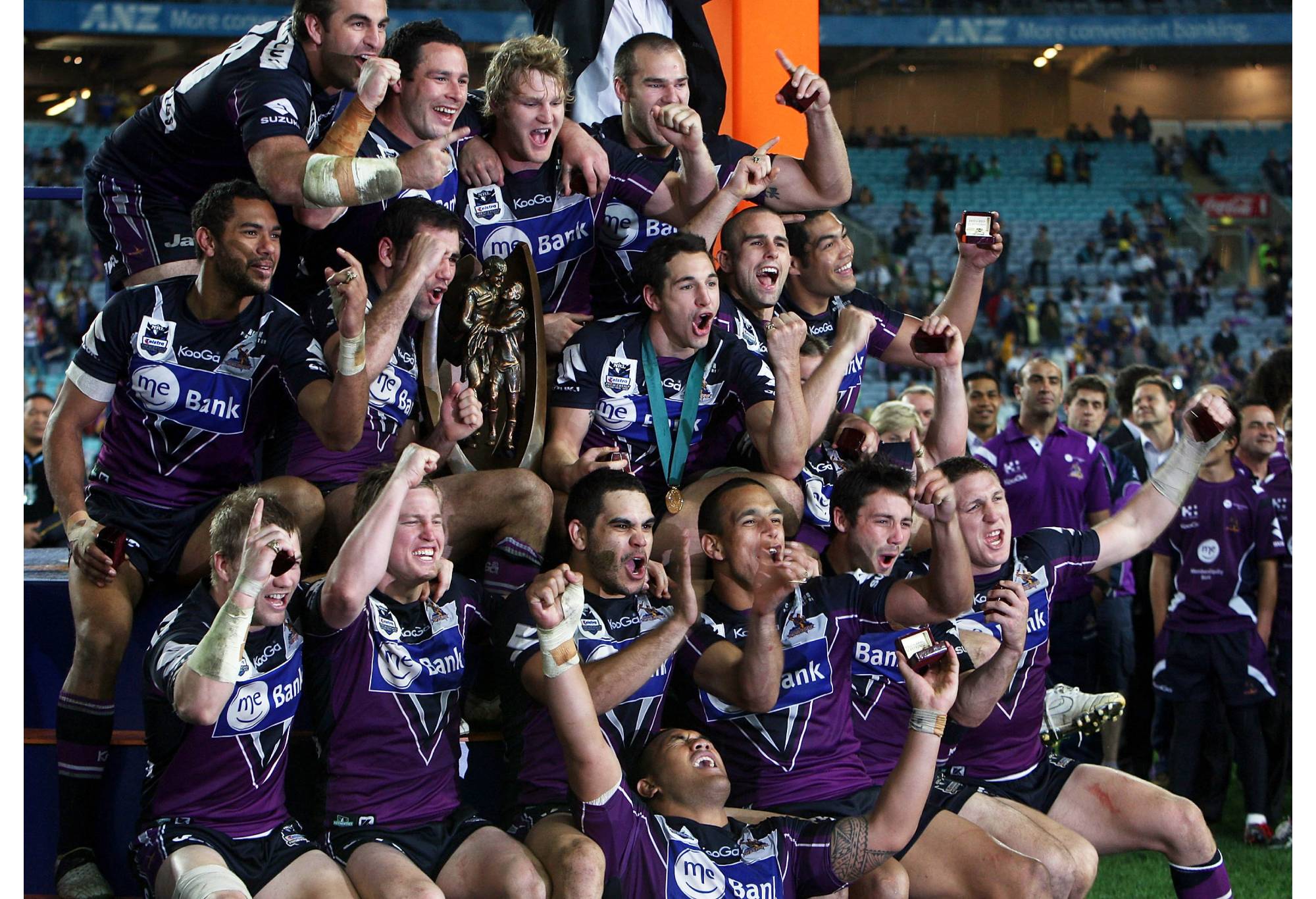 Hindmarsh was voted the greatest player who never won a title in a poll garnering more than 15,000 votes on the NRL official website a couple of years ago when everyone was bored during the pandemic shutdown. He “won” ahead of legends such as Immortal Frank Burge, Sharks duo Andrew Ettingshausen and Steve Rogers, Tommy Raudonikis, Stacey Jones and Wayne Pearce.

Irrespective of what you think about fallen star Jarryd Hayne in the subsequent years, the ‘09 surge to the decider from eighth place on the back of the Hayne Plane’s extraordinary purple patch deserves trophy recognition.

The 25-12 upset over the Dragons in the first final, a 27-2 drubbing of the Gold Coast and an epic 22-12 triumph over bitter rivals Canterbury in front of a heaving crowd of 75,000 tribal fans at ANZ Stadium, it had all the hallmarks of a Hollywood sporting script.

It even had the schoolyard bullies waiting at the finish and even though the Eels ran out of steam on Grand Final night to lose by seven, they proved they were the best legitimate team of that year and what is now a 36-year premiership drought should have been punctuated in 2009.

Top-four spot can be banked at stadium

If they had been awarded the premiership in 2009, the Eels would be the only team in the NRL era to have won the competition after finishing outside the top four.

Parramatta square off with old foes Melbourne on Thursday night at CommBank Stadium with the winners to get an all-important top-four berth and second chance in the finals.

After a feeble 26-0 loss to Souths in Round 22, the Eels have bounced back with 42-6 and 53-6 floggings of Canterbury and Brisbane respectively but coach Brad Arthur is wary of losing momentum as much as fourth spot if they put in a poor showing against the Storm.

“We know what’s at stake, we need to look to put a few wins together.,” Arthur said at his midweek media conference. “We’ve put a couple in a row and that’s got to be a priority. We’ve got a little bit of momentum and we’ve got to try and keep some of it.”

Parramatta enjoyed a rare victory in Melbourne in extra time in Round 3 when Dolphins-bound forward Ray Stone scored the winning try despite rupturing his ACL in the process.

When asked if this Thursday’s game was a case of the finals arriving early, Arthur replied: “Yeah definitely. I think both teams will have the same attitude around it.

“History states – whether you believe it or not – that you’ve got a better opportunity if you finish in the top four so I’m sure both teams will be going after it pretty heavily. 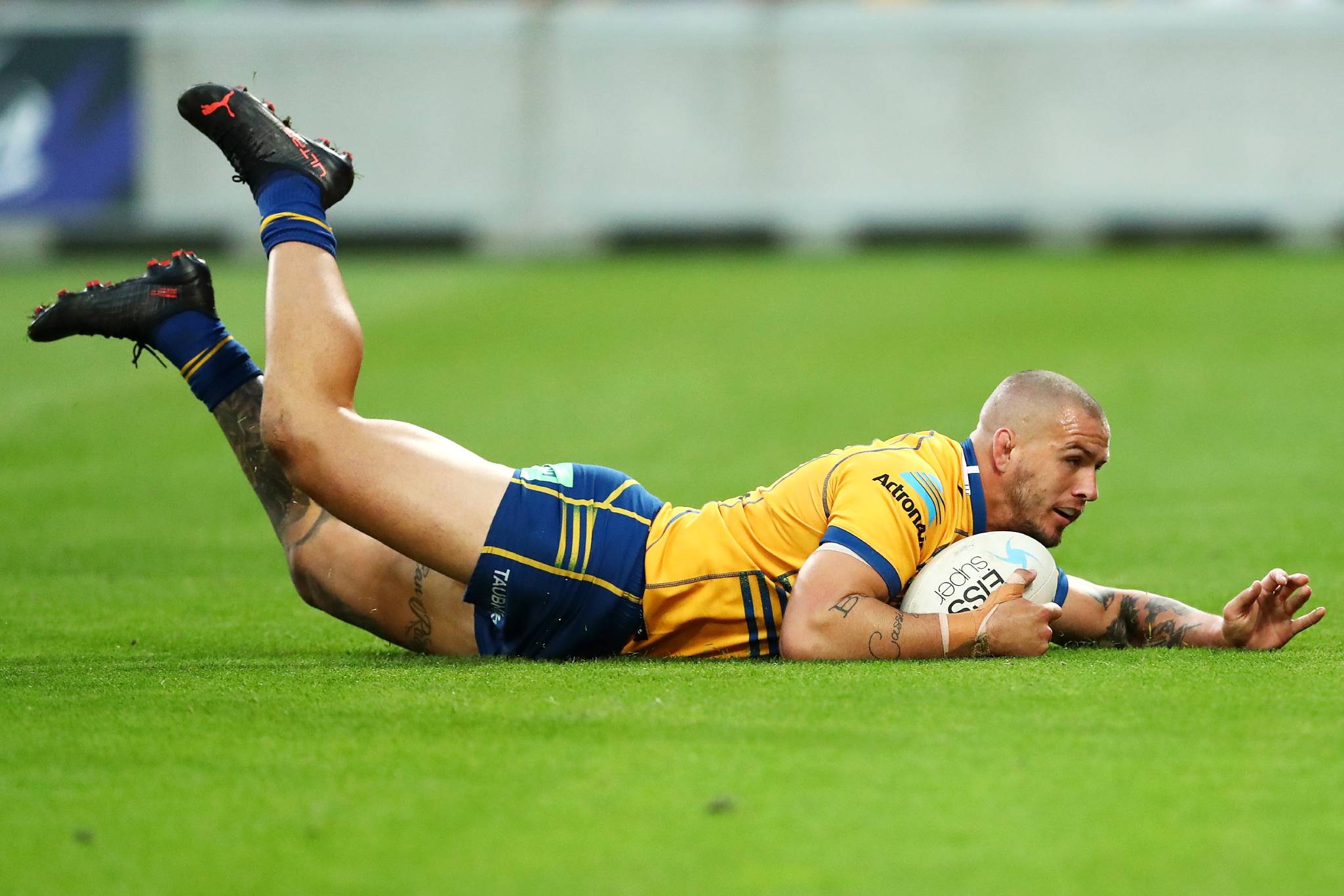 “If someone said at the start of the year, we’re playing the last round at CommBank against one of the heavyweights to play for a top-four [berth], what more do we want?

“It’s up to us. They’re going to be in the same situation – they’ll be just as desperate as us for those two points.

“We’ve worked hard to get this opportunity, it’s up to us to take it.”

The down side to finishing fourth is it means a trip to BlueBet Stadium to face premiers Penrith in week one of the finals but for the Eels, who notched two of the three Panthers’ losses this year, they would at least have confidence from their regular-season meetings.

Melbourne, the only other team to beat the minor premiers in 2022, could potentially finish third if they account for the Eels and the Cowboys lose on Saturday night but that appears extremely unlikely given Penrith have rested a dozen top-liners for their trip to Townsville.