It was American investing guru Warren Buffet who wryly observed, “It’s only when the tide goes out that you learn who has been swimming naked”.

And so it was in the Super Rugby Pacific final, where so many who have who have been over-lauded by the New Zealand rugby mainstream media across the course of the season, could not find a way to make a meaningful contribution when the intensity rachets up to somewhere near Test level.

Quick example of our media valuing the wrong things: New Zealand’s biggest circulation newspaper player ratings had Sam Whitelock, Cullen Grace and Jack Goodhue at 7, with only Codie Taylor scoring lower. Those three, plus Richie Mo’unga, looked the platform on which that game was built for mine.

Which begs the question, how many games in the Super Rugby season can be used to determine those that get to play at the next level, and does the standard and style of Super Rugby Pacific provide all sorts of false positives as to whether a player is ready is perform on the international stage?

With 665 New Zealanders playing professional rugby overseas and All Black player management minutes (this is really starting to look like a furphy given the number of games the English and French play in a season) meaning the best players are stood down for games, how many real contests do the selectors get to make these most vital of calls and how many times are they misled by the reduced quality of the opposition. The hollowed out New Zealand sides are beginning to look like a compilation of All Blacks and up and coming youngsters.

I can count on one hand the number of times over the years I have disagreed with one of the Roar’s rightly well-regarded rugby experts, but felt a real disappointment to read the assertion recently that Rieko Ioane had ‘come of age as a centre’ in the Blues quarter final match.

You don’t come of age, playing at home, against the 8th placed Highlanders, down to 14 men, who are so decimated with injuries that Leni Apisai a Blues squad player is the hooker bench option (thanks for that by the way Leni). It’s a massive false positive, so how that performance is any indication of how any player is likely to go when Bundi Aki, Garry Ringrose and Robbie Henshaw hove into view come July, is beyond my limited comprehension of the midfield backs.

In 2022 how many games could be considered as the benchmark required for making that critical next step. Anything between the Blues, Crusaders, Chiefs (when they weren’t hammered with injuries) and the Brumbies and that’s it for now, not a lot in a 12-team competition is it. The Hurricanes we know used an astonishing ten hookers across their season, and while a full-strength Highlanders first XV is competitive, add in a few injuries and sadly they are not a competitive 80-minute outfit. (and yes, it hurts to write that).

And although there were one off performances and part performances it really does come down to matches between those four to assess international suitability.

This lack of high intensity games over the seasons course led Blues coach Leon McDonald into a cul-de-sac that played in a huge role in their final defeat. After a really strong start to the season, we began to see the excellent James Tucker benched to move Tom Robertson into the second row and accommodate Akira Ioane on the blindside.

A strategy hard to question as the Blues were on unbeaten run of 15 games as they marched towards the relentlessly towards the final. But as the season got to the pointy end the warnings signs were beginning to show but were ignored. The Brumbies twice, and the aforementioned limping Highlanders for an opening 30 minutes really took it to the Blues up front and a tight five that was behind so many of the Blues 15 victories, began to creak. Crusaders coach Scott Robertson smelt blood in the water and went hard at it. 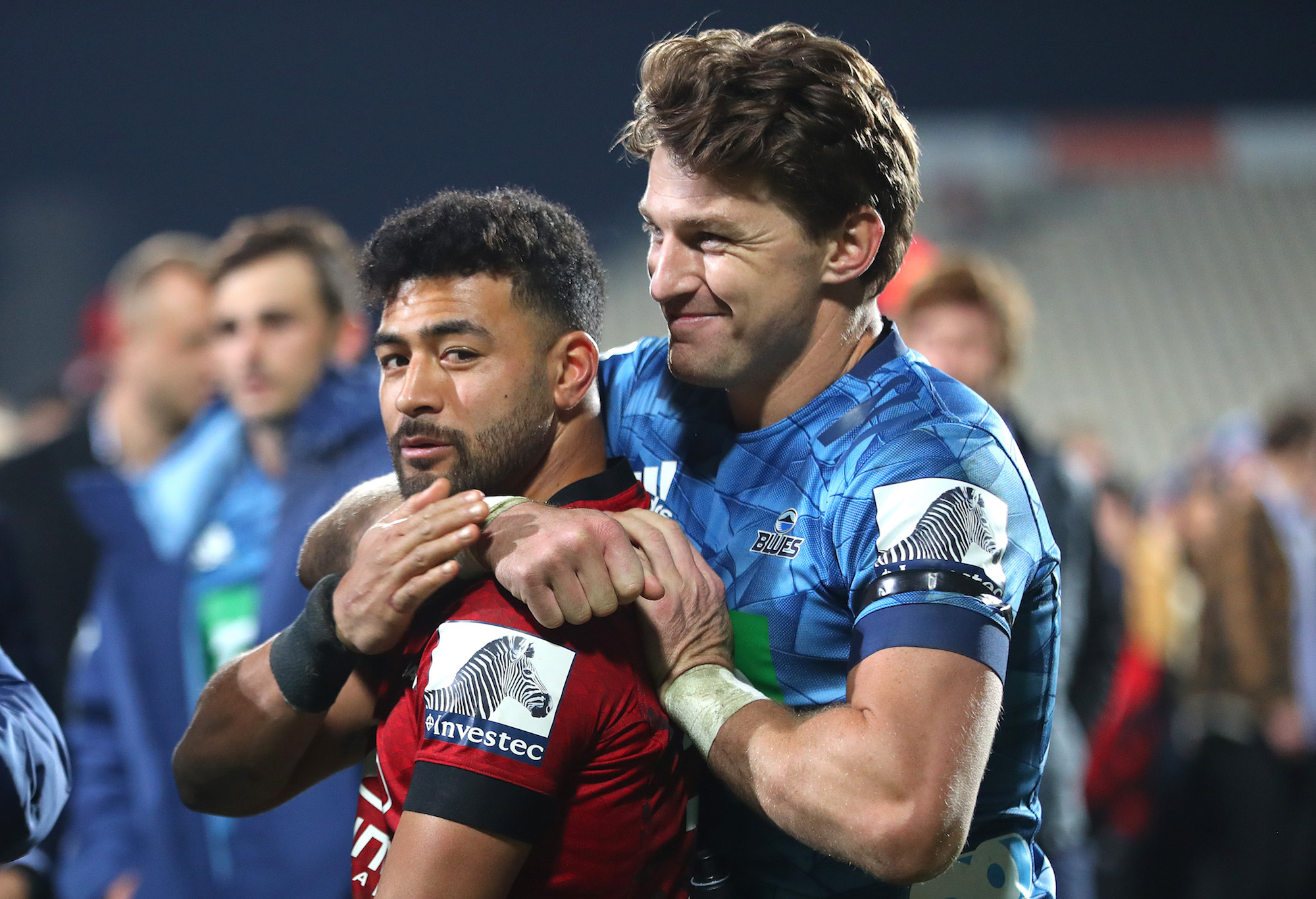 It hard not to draw comparisons with last seasons All Black internationals, where pace was preferred over stability and strength and New Zealand were overrun up front time and again.

I wonder if Ian Foster regrets selecting squad a week before the final, and for limited camp value as so many of his selections were in the final.

But the major conundrums that faced him at years opening, do seem a whole lot clearer now.

The stylistic battle of the 10s could not have been starker in the final. One who stays and plays in the 10 slot, demands the ball, kicks with real length and controls the game, versus the attacking genius who stays out the back, joining in as the opportunities arise to bayonet the wounded.

Before we get the normal, ‘behind a beaten pack’ arguments, Beauden Barret had 37 touches in the final, more than 50% higher than average across the course of the season. More than enough ball to make an impact but playing so deep makes winning the kicking for territory battle impossible and when he did flatten up, pushing passes at the line, as we saw in his South African tests, saw the ball turned over at least three times while the Blues were trying to conjure a comeback.

This style difference was best exhibited in the semi final for mine. When Pablo Matera was sent off in the 32nd minute, Mo’unga parked himself in the first five slot, demanded the ball and drove the 14 men around the park. This was the period when he made that excellent line-break and off load, followed up with the big left hander for Cullen Grace to score out-wide. Willingness to accept responsibility goes a long way to getting that black jersey I would think.

Similarly, picking a centre combination for the Ireland Tests has just been narrowed down. In the last two weeks we seen Jack Goodhue give two different but quality displays; one where side does not have the ball and he goes 17-0 at tackle time, and one where the weight of possession allows him to go forward, attack and push back that gain-line, all the while shutting down his opposites space on defence. He was really good in both scenarios. Who to partner him with in the midfield would be a discussion worth being a fly on the wall for.

The tight versus wider loose forward argument has been decided, with Saturday another example of it not working. Great to see specialists 8s with line skills included, but did Cullen Grace show the value of an 8 who can jump in the middle of the lineout or what. For those who will view the replay, look for how Grace closely watches the foot movements of his opposite at lineout time to choose when to go up and challenge. It’s very Brodie Retallick in process and execution.

Back to the best structure of a competition that has only limited Test match intensity encounters and therefore the lower intensity games favour the wider ranging running player in terms of visibility. The likes of a Sam Cane, a Goodhue, or a Whitelock are going to play the same way against the Brumbies as they do against the Western Force or the Highlanders, so the work that makes them so valuable come test time, is less visible and undervalued when there are so few high intensity games.

It would appear to me that in order to have a competition that challenges players for the next level, the reversion to a Super Rugby Australia and Super Rugby Aotearoa is required with perhaps the top three of each side of the pond going into a six-team playoff structure post season.

Australia gets the domestic winner that they need for local interest and the New Zealand sides get to focus on a full 10 local round robin games with the weekly continuity of intensity needed to ensure no one gets away with swimming naked for too long. Given this leaves all sides with fewer games than is required to work financially, is it beyond the realms of possibility that a plate type competition can be run for those not making the final series.

Car Lemon Laws: What to Know by State