Will the Wallabies ever show they understand what Dave Rennie wants from them?

It was a question that Dave Rennie could have swatted away but chose not to. After a demoralising loss to Argentina, where a lack of discipline and accuracy left the Wallabies coach frustrated and downcast, it seemed like he was not getting the answers he desperately needs.

When Rennie named the squad to face the Springboks on Saturday he was asked if he still felt his message was getting through to the players.

“Well, you could query that, couldn’t you?” said Rennie. “We’ve got a bunch of men, they’re certainly working hard, but you’ve got to show that on Saturdays.

“We played good rugby at times during the England series, but you’ve got to win big moments. Last weekend was way under par. Not good enough. We get a chance to respond against the world champions in a week or so.”

On Friday, captain James Slipper was the latest to talk about the Wallabies “needing to be better”, but words are never going to be enough.

Saturday’s game is a huge one in the context of the year, and will tell us more about Rennie’s leadership and if it’s a signal failure or something more entrenched. Maybe even if this team is fixable by the New Zealand coach, or beyond repair.

So far, though, it has seems too early to go there. Wallabies legend David Campese dipped his toe in on Friday, writing for Wide World of Sports.

“There’s been a lot of problems with the coaches in New Zealand yet there’s been very, very little said about the Wallabies boss Dave Rennie in Australia. Why is this so?” asked Campo, in what sounds like the first little beating of a distant drum.

“Argentina should not have been in a position where they could beat our national team by 30 points. We have slipped to seventh in the world rankings and surely Rennie should be coming under some pressure. 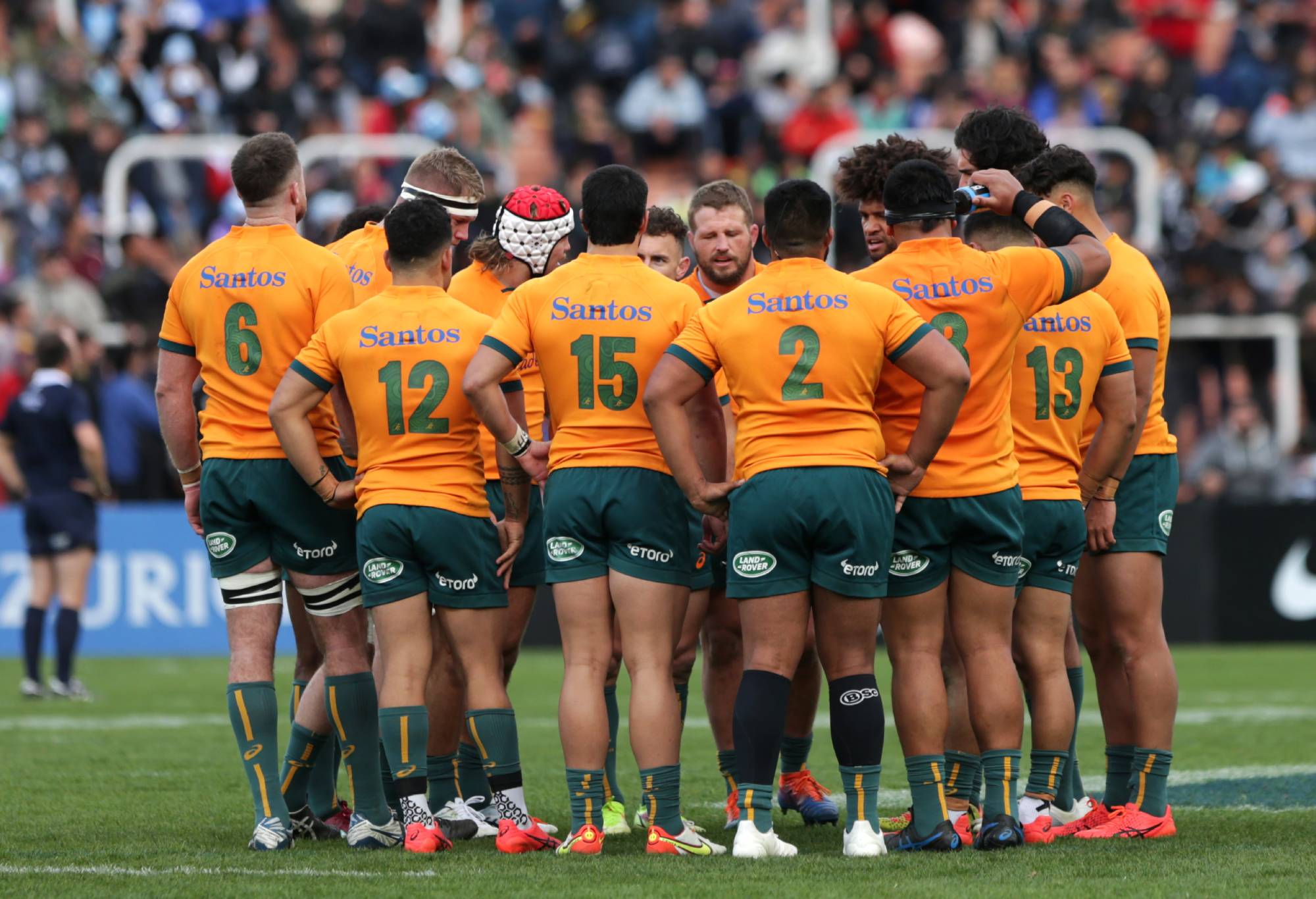 Players of Australia huddle during The Rugby Championship match between Argentina Pumas and Australian Wallabies at Estadio Malvinas Argentinas on August 06, 2022 in Mendoza, Argentina. (Photo by Daniel Jayo/Getty Images)

“We’ve got five Super Rugby teams but still have to go and find someone overseas like Bernard Foley to play. What is going on with our high performance?

“Obviously it’s not working. Maybe one of the reasons is that the high performance people have been there too long and aren’t working on what they should be.”

There are several reasons why Rennie has escaped serious speculation about his job and Campo being Campo, this piece was dismissed by plenty. The decision-makers at Rugby Australia are believed to be opposed to sacking coaches on a whim, and there is no clear candidate ready to replace him.

But in a results business, he sure could do with some to go his way and it’s entirely possible that Rennie heads to the break on the back of five straight losses unless the message to his players gets through in a hurry. It might be starting with Campo, but who knows where it will end.

There are question marks everywhere you look with the Wallabies, and the sport in Australia generally.

At least Rugby Australia has the commonsense to end the Camp Wallaby setup that has existed this year. The Wallabies have chosen to stay hidden away in their Queensland base until the Thursday night before games, leaving a public relations void on the ground.

In Adelaide there are nine junior rugby clubs in a town dominated by AFL and football. The Springboks have been doing some missionary work but it beggars belief that the Australians have not been here doing their bit.

It was the same in Perth and Sydney, which Eddie Jones viewed with dismay.

The inability of Australian rugby to get its peak team out in the community has been noticed. A sport that needs to win hearts and minds, with a World Cup coming down the line, has failed on both counts.

Here are the other burning questions facing the Wallabies right now.

Is Noah Lolesio the long term No.10?

Lolesio has been given another chance to steer the team around from No.10 in Adelaide and while he could be Rennie’s guy, could be brought in close and given 100 percent faith by the coach, that hasn’t happened.

On Friday Slipper said Lolesio was a confident guy who remained chirpy despite his yo-yo international career. James O’Connor was shed for failing to stick to Rennie’s game plan against Argentina – the biggest casualty yet for failing to heed the message being handed down.

Assistant coach Dan McKellar has made it clear that Lolesio doesn’t need to over play.

“He doesn’t need to go there and think he needs to be the best player on the field,” said McKellar. .

“Play the game in the right areas of the field. That’s what his job is. If he does that and he’s really solid that’s a tick in the box for him. So I don’t think it’s about him going out there thinking he’s got to create a whole lot of opportunity for others. It’s just about doing his role well.” 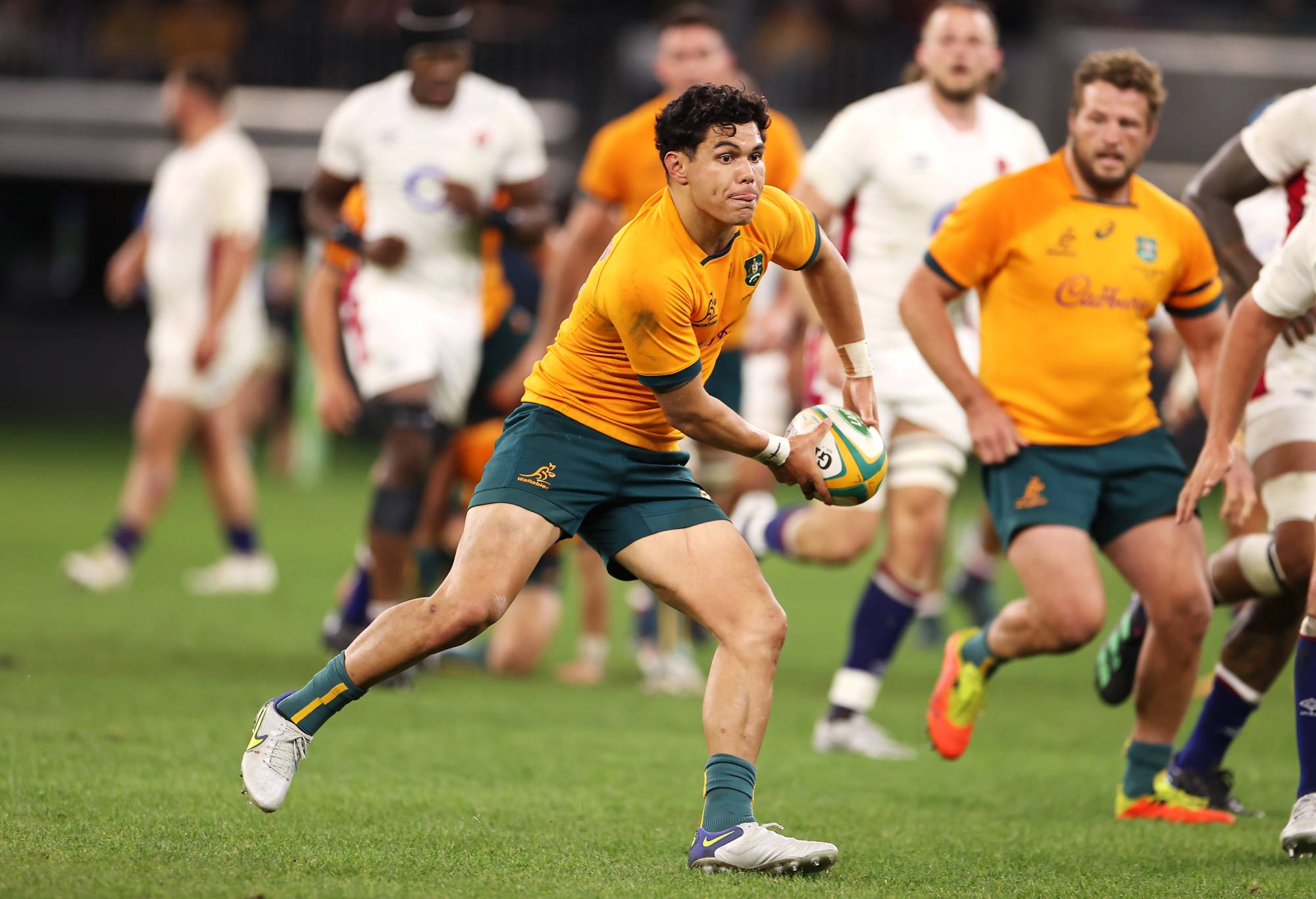 How many chances does Lolesio get? If Australia lose there is every chance Foley comes in for the Sydney Test. In that scenario, maybe it’s time to try another of Australia’s young playmakers to see if they are any better at sticking to the script.

What’s happening with the back three?

Rennie talked up the depth at fullback but being spoiled for choice isn’t always a good thing. It’s a big game for Reece Hodge, who will be targeted by high kicks. Rennie will be looking for the Rebels fullback to clear long but has he missed a trick by not selecting Suli Vunivalu on a wing to leap high to claim attacking bombs?

And how long can it be before Vunivalu gets unsettled by his lack of chances, having been capped for a matter of minutes against England in Sydney and not sighted since?

The genial giant was joking about his contract situation at the start of the year, telling Rennie to show him the money as he was asked about his desire to play overseas. A calf muscle injury cost him significant prep time before the England series, where he failed to impose himself.

Tupou became a father recently and who knows if that’s had an impact on him. Whatever it is, he’s lost his mojo and Rennie needs it back.

The coach was pointed when asked about Tupou this week. Tupou sharing starting time with Allan Alaalatoa is not new but Rennie painting it as a demotion certainly is.

“We need more out of him, he’s well aware of that,” said Rennie.

“He was pretty disappointed with his effort in the second Test. We know he’s very good scrummager, but we expect him to dominate with and without the ball as well.

“He was disappointing in those areas. So I guess the repercussions for that is that he comes off the bench.”

Is there a leadership vacuum?

If anyone in the Wallabies set-up knows if and when Michael Hooper will return they’re not saying. Slipper is a good choice as interim leader but a lack of certainty over the role long term can’t be allowed to linger.

Of course, Hooper needs to be given every opportunity to return at his own pace, and he might return as a player without taking back the captaincy role.

There are some impressive men in the ranks but are there enough who are captaincy material? Tate McDermott is one with the potential, but much like Lolesio finds himself in and out of favour – although it’s looking more like he’s getting closer to locking down the Nic White understudy role.

Unlike Ian Foster, to whom Campese compared Rennie this week, Rennie appears to have the luxury of time to get things right.

Foster saved his job by beating the Springboks. If Rennie can do the same it might prove that his message is finally starting to sink in.

Read the DOJ’s redacted affidavit from the Trump search