With their season in the toilet, where to for the Newcastle Knights?

It’s wild that in a week in which Millie Boyle and Adam Elliott played in consecutive games at the same ground, all the chat about bathroom stalls was centred around Kalyn Ponga and Kurt Mann.

I’d say it’s been a disastrous week for the Knights – with Enari Tuala and Bradman Best stood down from the game against the Raiders for turning up late to the team bus, as well as whatever it was Ponga and Mann were up to in the bogs at the Delany – but then that fails to take into account what a total shocker the week prior had been, with David Klemmer being stood down for something that happens all the time.

It’s worth mentioning the other man at the heart of the Klemmer issue, trainer Hayden Knowles, then went off on social media, accusing commenters of bullying and various other online crimes at a time when he needed to keep a low profile.

Of course, the fortnight of failure was just the icing on a sorry season, in which the team’s finals hopes were dead and buried early, floggings at home were de rigueur, there were various calls for the coach’s head – although it’s important to note that reporting someone has called for Adam O’Brien to be sacked on Twitter (or worse, NRL 360) has about as much merit as what my greyhound leaves for me to clean up on our evening walks – and the team looked to have just given up at various points.

Fair play to them, the Knights put in on Sunday afternoon, taking it to the Raiders until the last play – a respectable outcome considering the home side were missing Ponga, Mann, Tuala, Best, Daniel Saifiti, Tyson Frizell, Leo Thompson, Jake Clifford, Mitch Barnett and Lachlan Fitzgibbon.

After what the Warriors, Broncos, Bulldogs, Sea Eagles and Tigers dished up, a team with nothing left to play for only losing by six to a Green Machine that needs to win and win well to stay in the hunt for the eight was…

No, I’m not doing that. It was a loss. Another loss. At home. And the Knights were leading 22-8 at halftime!

So where to for a club that supporters were promised was on the up?

First things first, the issue of off-field discipline needs to have a spotlight shone on it.

I’m disappointed that Best and Tuala’s incident occurred the same week as the ‘Spell in the Del’, because standing down a pair of young players for being late to the team bus was an action with which I wholeheartedly agreed.

The two incidents should be treated as they are – entirely separate and unrelated.

Now I’m rotten for punctuality, so I say this with a ‘do as I say not as a I do’ attitude, but Best and Tuala needed this lesson to be rammed home. 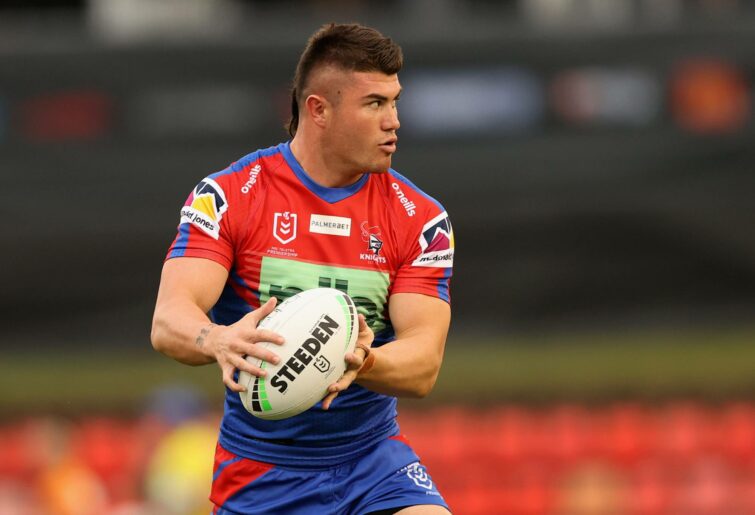 While few people actively think it, the message when you are late is ‘my time is more important than yours’.

A minute here, a minute there, sure, some people’s clocks are a little faster than others, but being ostensibly late is disrespectful. And being six (maybe seven – reports vary) minutes late for a bus going to the airport? Multiply it by the amount of people on said bus, which is going to be about 30, and the pair of young players are wasting a collective three or so hours.

So I’m all for Best and Tuala getting dropped. Draw a line in the sand, start to make it clear to the whole squad that the little things matter – the way the Knights are handling the big things suggests lots of little things are going by the wayside.

As for Mann and Ponga? Man, it pongs.

Coming out of a bathroom stall together with drinks in hand, while you’re on the long-term injured list, on a night in which your teammates have just been towelled up in Brisbane? Every part of that stinks.

But when you pull it all apart, I honestly don’t know what grounds there are for much of a punishment.

Reports are that the pair were at the Darby St establishment around 11pm, a good hour and a half after their teammates had finished losing to the Broncos. I suspect no one would blame the players in Queensland if they had been on Caxton St for a few commiseration libations at the same time.

Ponga and Mann are both injured but, again, reports are the club hadn’t banned them from drinking.

And as for what was going on in that bathroom cubicle? Honestly, when I first read “Mann and Ponga filmed emerging from toilet stall”, my mind went to Boyle and Elliott.

We don’t know what they were doing in there, is my point, and as long as they stick to Andre Ponga’s line about KP feeling sick and KM going in to give him a hand – perhaps the two of them bringing their drinks with them for fear of being spiked, professional athletes need to be especially careful not to consume drugs – who can prove they’re lying? 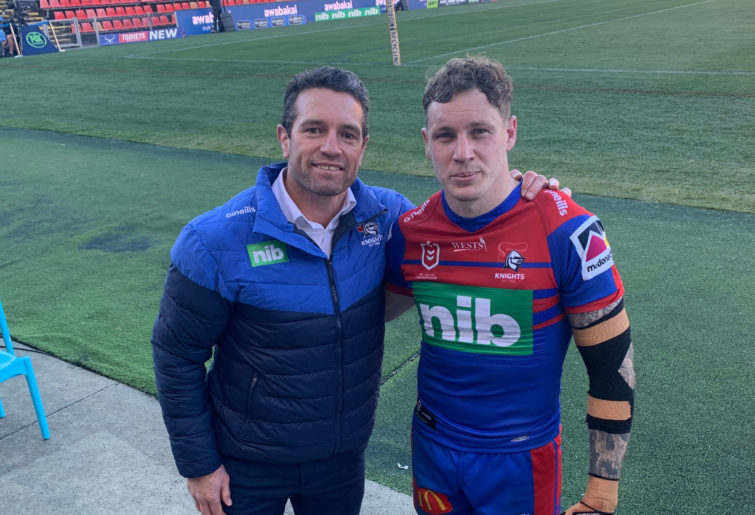 I didn’t come down in the last shower. It’s not at all what I believe.

But how can the club or NRL argue the pair deserve to be punished at all when there’s zero evidence they’ve broken any rules?

Honestly though, what I’ve outlined is my biggest fear. That instead of putting their hands up, admitting they are at fault, accepting whatever punishment comes their way, and regaining the trust of their teammates – and, more importantly at this point, the long-suffering fans – through actions rather than words, they’ll claim to be victims.

“I was only a few minutes late and I get stood down?” Or “I literally did nothing (that you can prove) wrong, why am I in trouble?”

If that is to be the case – especially if it’s the attitude of the team captain – the Knights are in a far deeper hole than we realise.

Which brings me to the issue of Ponga being skipper.

I’ll begin this by saying that so many people who have called for him to be replaced have used false equivalence to make their point.

Paul Kent, in a piece with the headline “Why Kalyn Ponga won’t help Knights win a premiership”, compared him unfavourably to the late, great Tommy Raudonikis and his leadership of Newtown, Kent reaching the conclusion “great clubs are always well led”.

Cool. Except Tommy never won a premiership and the “great club” of Newtown was punted from the top flight in 1983.

Another cracking story from Kent, as long as you don’t know the actual ending.

As for comparisons to the likes of James Tedesco? At Ponga’s age, Teddy was an undoubted talent who had just signed a million-dollar-a-season deal, despite the fact he had won nothing of note and was making headlines for getting punched by his own teammate on a boozy night out.

‘Squid Game’ cover-up aside – Tedesco, the Roosters and the NRL should hang their heads in shame for the way that was swept under the rug – he has since matured into the game’s best player and Kangaroos captain in waiting.

Long story short, Ponga shouldn’t be the Knights’ captain in season 2023. This year has proven beyond a shadow of a doubt he’s not ready for it.

But to say he “won’t help Knights win a premiership” or comparing him to Tedesco at 29 rather than 24 is obviously flawed.

KP’s got a lot of growing up to do, but maybe give him a chance to do it before we declare that the man of the match from Origin 3 is a lost cause.

Bigger picture, the Knights do need some new recruits, because the current squad are not going to win a grand final.

A half needs to be their primary concern but for some bizarre reason, the rumour mill says they think Tyson Gamble is the man to chase.

You could just shake them, couldn’t you?

A guy who can’t make the game-day 17 at a club on the verge of falling out of the eight – and where this same guy played the lion’s share of his games while they were nowhere near finals contention – is not the answer.

Newcastle already have Phoenix Crossland and Adam Clune on the books. Gamble is roughly on par with them – and has, in fact, played fewer games than both Crossland and Clune, so it’s not like the unwanted Bronco is bringing experience, let along big-game experience, to the table.

Why wait a year to replace Mitchell Pearce with something you already had before he left?

Far more exciting for fans is the prospect of Reuben Garrick coming to the Hunter, although that’s only doing the rounds because Phil Rothfield ran it up the flagpole in a way that made it sound like a transfer deal is bubbling away for the under-contract Sea Eagle, but the piece that started this rumour doesn’t even cite “sources close to the club”.

In short, it seems like a Buzz brainfart that can be summed up thusly: “I reckon the Knights should chase Garrick”.

Well, as long as we’re having brainfarts, here’s mine.

Newcastle need to go after the Storm’s No.6 – and no, not Cameron Munster, who’s just never, ever going to come to the Hunter when he can stay in Melbourne and keep winning or go home to Queensland and get paid more than the Knights can offer. 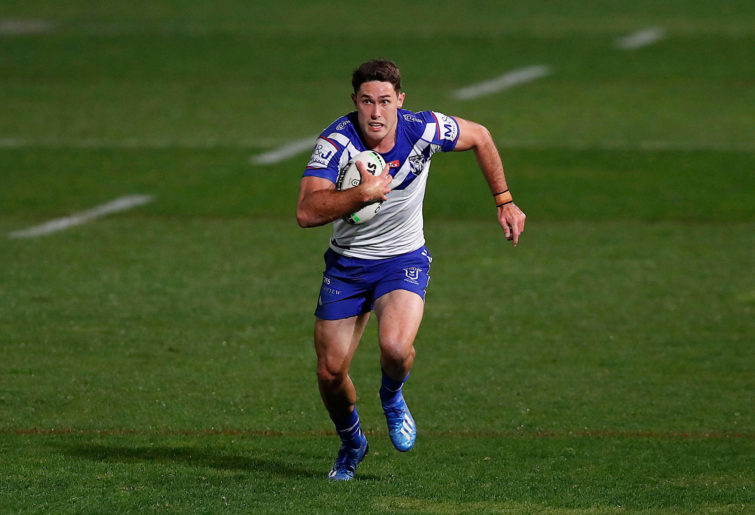 Basically, Meaney left for a good reason and therefore, I would hope, there were no hard feelings either way (I mean, I have hard feelings, since Ponga’s first attempt at 6 happened as soon as Meaney left and was largely a failure because the Knights didn’t have a reliable fullback, but maybe Nick isn’t mad).

Three tough years at Canterbury followed but he is truly blossoming at the Storm, showing pace, vision and power – the kind of skills the Knights must have seen when he kept winning all those club awards in the lower grades – and bloody hell, the guy can kick a goal.

Best of all, he’s currently learning in a system where nothing short of excellence is tolerated.

He’s everything the Knights need and a local junior to boot.

As for where he plays, get him here and then work out whether he or KP best suit the team at 6.

But get him here – that’s the important part.

No, I’m not saying Nick Meaney is the silver bullet for the Newcastle Knights. Nothing is. The joint is a total dumpster fire.

Lots of things, big and small, need to be fixed.

It starts this week with discipline – and how those being disciplined respond.

A tale of two Wallabies selections

BlockFi Could Be Acquired by FTX.US for Only $15M: Report