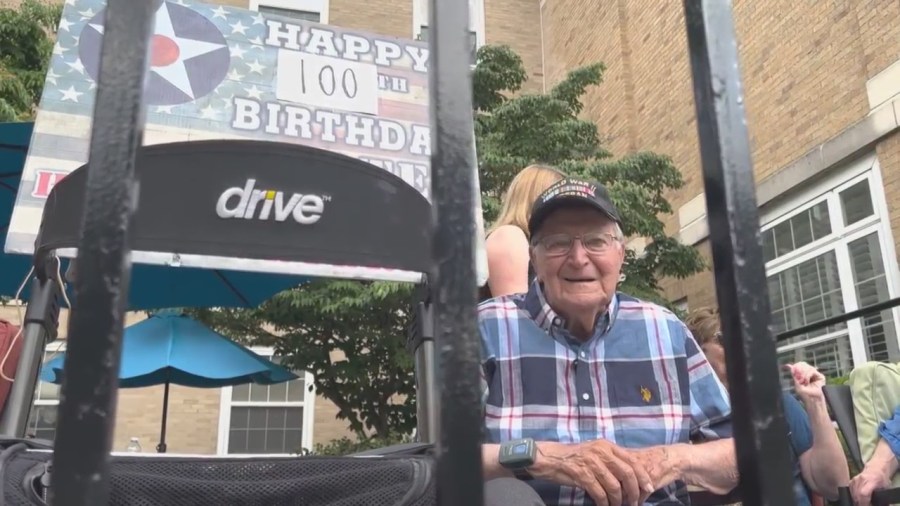 The Village of Hamburg and Alessandra’s family surprised him with a parade and ceremony Saturday, to honor his 100th trip around the sun.

“I never realized that there would be so many people that would come out to celebrate my birthday,” Alessandra said.

He was one of four brothers who served our country during the war, and said he thinks about them a lot.

“I dedicate this day to my three other brothers who served in the service,” Alessandra said. “One in particular passed away in the South Pacific.”

His brother, Alfred, was killed in combat two months before the war ended. He accepted the Purple Heart in Alfred’s honor.

“I always think about him. He’s always in my mind,” he said.

Alessandra’s love for his family continues to grow today. His family traveled from all over the country to surprise him. His granddaughter, Kelly Perkins, traveled from Seattle to celebrate the man that always showed up for her and for his community.

“He’s always involved,” Perkins said. “He’s on that scooter everyday running around Hamburg looking for things to do. He likes people and always would do everything he could to help people.”

Everyone who knows Pops knows he’s 100 years young. According to his family, he has a Facebook account, the latest iPhone, and loves to watch Buffalo sports.

But if you’re wondering what his key to his youthfulness is — he says it’s from the love from his family.

“They keep me going. I got a beautiful family,” Alessandra said. “I love them dearly and they love me. It means a lot.”