You should watch AFLW this season: A letter to my fellow men

The AFLW season is almost upon us, and with it comes the most stacked campaign of women’s footy we’ve ever seen.

We have four new teams, tons of new players and, for the first time ever, living wages (for some athletes).

But you, like many, might be a man sitting at home hoping to change the channel to find any other program to watch. Maybe you can even remember a time when you mumbled the phrase ‘women’s footy is not very good’.

Everyone is entitled to their opinions, and if that is truly your opinion, then let me try and change your mind and tell you why this is the season you should start tuning in each week.

We are into only the seventh season of professional women’s football. Some of the players who are going to be lining up on the weekend didn’t even know how to kick a football seven years ago; how could anyone expect them to be as good as men who have practised the nuances of AFL for their entire lives?

The average viewer of women’s football seems always to try and compare it with the men’s competition. But ever since they were little boys, AFL players have dreamed of making it to the big stage. To get there they had to be better than 99 per cent of all other little boys who also had that dream.

At every stage of growing up, men have programs and elite coaching sessions to help progress their skills. When I was playing under-nines football, I had to compete just to keep my spot in the firsts team. You would be hard pressed to find a club with a full squad of under-nines girls, let alone two under-nines teams competing for their chance to play in the higher grade.

A majority of the AFLW players are rocking up to their nine-to-five jobs on weekdays, slogging out a gruelling training session two nights a week and then going out and playing football on the weekends. How could we ever expect the competition to improve if most of the players spend their lives clocking shifts or sitting behind a desk? I have that same routine every week and my skills haven’t improved since 2014. 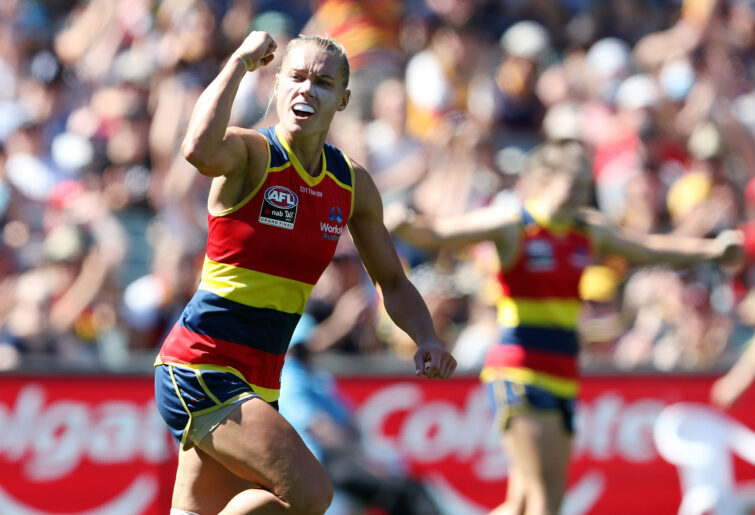 Erin Phillips of the Crows celebrates a goal during the 2022 AFLW Grand Final. (Photo by Sarah Reed/AFL Photos via Getty Images)

The bar is set completely differently for women, and that’s okay. Hopefully, it won’t be too long until we do see the women’s game become as competitive just to make it to the big leagues. And that’s not to knock the players who are lining up for their clubs this weekend. The players we will see this weekend are the best of the best, elite athletes showcasing their craft on the biggest stage.

But this is why we, as males, must continue to support them. These women are our wives, our girlfriends, our mums, our sisters and our daughters. We should be helping in whatever ways we can to give them the best opportunities in life to achieve their dreams. And the simplest way to do that is to turn on the television, cheer for your club and purchase a membership. The average price of an adult AFLW membership is just under $40.

So now you’re watching a game and you’re wondering why the score isn’t as high as the men’s competition or why none of the players has kicked a bag of five goals in this match. Well, the cool thing about AFLW compared to the AFL is that it’s a completely different game. It’s the same sport, sure, but it’s a different game.

The strategies are different, the rules are different and the women play an entire quarter less of football than the men thanks to quarters running to 15 minutes rather than 20. Once you jump over the hurdle of, ‘Oh, this is a different game’, then you will really start to enjoy it. If you go and watch a chess match expecting it to be a bull riding competition, you’re going to be let down every time.

Watching 16 girls on either team work their tails off and pour their hearts into a match to try and come away with the four points is entertaining, even in a blowout, because the team that is losing by 40 points still has 21 girls on it who are thrilled to have an opportunity that their mothers and their mothers’ mothers never even thought would be possible.

You might have heard the Bill Burr stand-up routine where he challenges people to name five WNBA players, and his point is that nobody watches the WNBA, which is why their players can’t earn decent money. Fundamentally the same concept applies to the AFLW. If the competition doesn’t get enough eyeballs, if the AFLW doesn’t earn enough revenue, then we will never reach a point where the players can do this full time and improve to a level beyond our wildest imaginations.

So jump on the bandwagon now. Encourage your sons and daughters, nieces and nephews to watch every game like you used to when you were a boy. Encourage them to look up to their favourite superstar athletes and role models. Tell them they can become whatever they dream of and sit beside them and watch the games along with them.

Figure out who your own favourite players are, go along to an open training session or even buy a $10 ticket to attend a match. Cheer as loudly as you can and try and get a high-five or an autograph when your favourite player does a lap of the ground following a win. It costs almost nothing, and you’ll have an incredible afternoon. Maybe you’re a single guy like me – take somebody on a date and impress them with your knowledge of the teams.

The AFLW is one of the greatest sporting competitions in the world because it’s truly more than a game; it is an example of what equality can look like in society. It gives our young women a sense of belonging and a drive to be the best. It gives our young girls a dream to strive for. And it gives our men and non-binary friends a fun and entertaining sport to religiously sit down on the couch (or in the stands) and watch every single week.

Kaleida workers to vote on strike in September